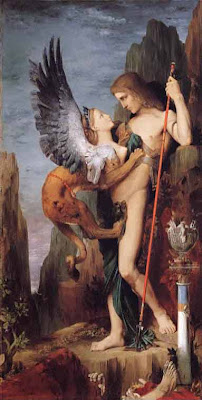 Here's an analysis of Georges Enescu's opera Oedipe in Toulouse. Evan Dickerson, who writes the piece , is an Enescu scholar. He's writing a new book, too, which should be worth watching out for as there's relatively little available. (A few years back Toccata published a short bio) Google and you'll find a few of the other things Evan's written about this interesting but relatively neglected composer.

"This new co-production by Nicolas Joel between Toulouse and the International Enescu Festival is further evidence that Enescu’s mature compositions continue to gain serious attention before the public. There are unconfirmed rumours that the production might be seen at the Palais Garnier in Paris during the 2010-11 season, as Joel assumes control of Opéra de Paris in September 2009."

" The real beneficiary of the production though was the music, and no doubt as a conductor himself, Joel realised that this is where the emphasis should be. There is after all enough musical detail in Enescu’s score which deserves its chance to be heard, and not become swamped by stage action. A huge orchestra including additional piano, harmonium, celesta, glockenspiel, alto saxophone - and for purely dramatic effect also including a musical saw, wind machine, whip on drum, pistol shot and a nightingale’s song - is employed, but all are used with a great deal of restraint. This is further augmented by mixed adult and children’s choruses to add specific textural nuances to the narrative."