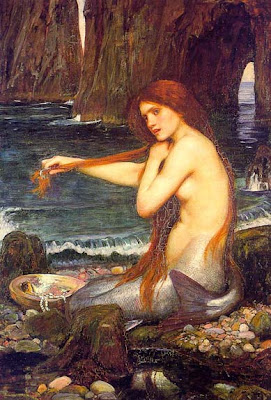 Melanie Eskenazi is one of the most perceptive writers on the baroque. This is what she's written on the new ENO production of Handel's Partenope :

"Partenope (Greek for ‘virgin’) was, according to one legend, cast ashore on the coast near Naples after throwing herself into the sea in her despair at not having been able to sing Ulysses to his death – it’s almost as good a name for an opera as “Orfeo” and this first staging of the work in London since 1983 is given an exciting production, further strengthening English National Opera’s pre-eminence as the leading house for Handel opera. “Partenope” could almost be called a chamber opera, and in purely visual terms one might have been looking at a production of Richard Strauss’s “Capriccio” – but more of that later. It’s singing that counts in this music – and this was an evening of exceptional Handelian style. Rosemary Joshua’s Partenope was a worthy successor to her Semele, ‘L’Amor ed il Destin’ typical of her confident delivery, silvery tone and mastery of phrasing. In Act Two, ‘Qual Farfalletta’ was perhaps a little subdued, but ‘Quel volto mi piace’ was incisively characterised. It helped that she was not only beautifully costumed but given graceful and appropriate things to do whilst singing, neither of which advantages were given to the Emilio of John Mark Ainsley, who must surely now win the award for ‘Singer Who Has Survived the Most Stupid Stage Business Whilst Singing Impossibly Florid Music’. Ainsley sang his first aria whilst placing bodies and photographing them, his third up a ladder wearing a skirt and a turban, but ‘Barbaro Fato sì’ topped them all, standing on a toilet, leaning halfway out of a transom window and smoking. All taken in his stride, of course, the rapid coloratura delivered with firm steady tone and immaculate diction..........."

"Alden and his co-director Peter Littlefield, together with the set designer Andrew Lieberman, took their inspiration from Surrealist writers and artists, setting Partenope’s court in a pared-down, blond-and white version of Man Ray’s studio: the character of Emilio is presented as the photographer, arranging images just as he arranges the lives of the other protagonists, and the heroine is an emotionally well balanced version of Zelda Fitzgerald – you could just see this lady using a belt to ensure that the lift stayed on their floor.Does it work? Yes, it does – the world of the early eighteenth-century is not that far distant from that of the early twentieth in terms of its surface gloss and its emergent questioning of the relationship between Reason and Emotion, between the urbane and the spontaneous, and the concept is wonderfully coherent despite the demands made upon some of the singer / actors within it. It’s also very funny in parts, and although I did not always warm to Amanda Holden’s chirpy translation (“Crikey!” “O shit!”), it certainly engaged most of the audience."