Adventures with a Balafon 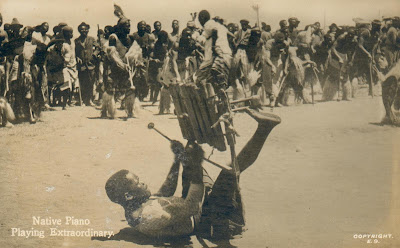 A balafon is a type of African xylophone. They come in all sizes. There are even huge "orchestral" versions played by three men together at one time. They're made from slats of wood cured and hardened for pitch, then strung together. Usually, large gourds are added below the slats for extra resonance. They're played with hammers. Here's a link to African Safari, a guide to African xylophone culture - several video and sound clips of different types.

Balafons and xylophones are common in central and west Africa, but this photo was taken in Johannesberg in the 1920's (look at the audience, click to enlarge for detail). The version in this photo is unusual because the instrument's been adapted so the man can play it lying down. Maybe he had a bad back. This instrument's small and portable so maybe he was a travelling musician.

Another story about balafons : Olivier Messiaen wanted to experiment with one in the late 1940's. He'd recently had the usual father-son scrap with Boulez, who, by way of making peace, tracked down a good balafon (quite a large one) and carried it across Paris and up into the organ loft at La Trinité. The source of this story is Pierre-Laurent Aimard who heard it first hand from Messiaen himself, who was thrilled and delighted.