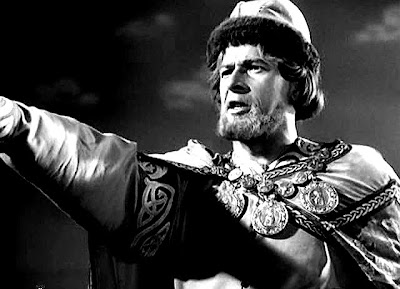 Hearing The Gambler at the Royal Opera House last week was an excellent experience because it showed Prokofiev at the start of his career. It gives perspective on his later, more popular work. Prokofiev, after all, chose to return to Russia instead of seeking a profitable career in the west, like Stravinsky.

Admittedly, the early Soviet era was idealistic, and for a time even encouraged modernist, radical art. Inevitably though, Prokofiev had to bend to Stalin. He, too, is a "suppressed composer" not really so very different from Hartmann and some Germans under the Third Reich.

Depressing irony, given that Russia and Germany were locked in a struggle to the death. In this context, it's bracing to watch Alexander Nevsky, the film by Sergei Eisenstein, with music by Prokofiev. The Soviets and Nazis were implacably opposed despite their unsteady pact that collapsed when Hitler invaded the USSR. The film, made in 1938 has a clear message: The Russian people won't give in.

Obviously, as a propaganda film, it's polarized. The Teutonic Knights are shown in costumes that dehumanize them . They wear helmets with cross-shaped slits that make them look like fools with leaky buckets on their heads. There's even an evil monk playing an organ, like the Phantom of the Opera. In one frame four knights line up: the Horsemen of the Apocalypse. The wars between the Slavs and the Teutonic Knights were horrific, as was the invasion to come. So the shots of Germans throwing babies into fires is pointed.

In the film, religion is specially singled out as evil. Lots of shots of crosses, white robes, ceremonies, far more detailed and explicit than the stylized Russian churches, glimpsed in the background. Only at the end, there's a splash of Russian Orthodox images, when the dead heroes are brought into town. But it's clear that the war wasn't won by the church. The message of this movie isn't just anti-German. It reminded Soviet audiences that all religion is "the opium of the people". And, as one peasant cries, "You can't trust the rich, they'll sell out to anyone".

Alexander Nevsky, by contrast, is pure. He won't join the Mongols though they offer him glory. "Better to die in your own land than leave it." Interestingly, Alexander and his men sport Lady Gaga haircuts, more blonde and "Aryan" than the Nazis, who hated Slavs. Let's not forget, the Soviets didn't like Jews.

Einstein's crowd scenes are magnificently filmed. Wide angle frames, panning out over horizons, so you can watch battle formations move in choreographed diagonals. Many shots where the horizon is in the bottom quartile of the screen, vast expanses of sky above.. Stalin didn't like "modern art" but what Eisenstein is doing is extremely modernist. almost abstract art. Indeed, everything is so clean and stylized it's like art deco - no blood, guts and mud here. When the Russians tear their prisoners apart, the camera recedes. Even the Battle on the Ice isn't particularly icy or grim, it's more like ballet. Or an Expressionist movie. Eisenstein created the genre.

Prokofiev's music had to be shaped to fit the movie, so he couldn't write without restraint. The soound quality on the film transfer is so awful, you can barely hear the orchestra. Listen, instead with a CD to hand. Then you realize how Prokofiev disguises discordant, awry rhythms behind scenes where such music will be "appropriate", like the Battle on the Ice, which criss-cross themes that evoke the idea of warring forces. The fanfares of Russian horns don't sound ostensibly "modern" if you're looking at men in medieval robes blowing primitive horns. In the last scene, Prokofiev's music's fairly straightforward, but Eisenstein's directing isn't. He shows a panorama of Russians holding spears upright, like a forest stretching endlessly,, a spiky and quirky image. "He who comes to Russia with a sword shall perish by the sword". The Soviets probably loved the film on this level, but Eisenstein and Prokofiev undercut the propaganda with something more subtle.
at February 15, 2010

Email ThisBlogThis!Share to TwitterShare to FacebookShare to Pinterest
Labels: music on film, Prokofiev