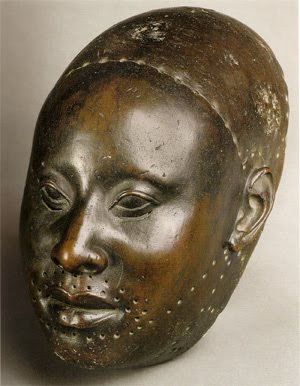 On 4th March a new exhibition opens at the British Museum, Kingdom of Ife: sculptures from West Africa. Ife was a powerful nation that existed in what is now Nigeria 700 years ago. This culture produced bronze sculptures so beautiful and naturalistic that they seem alive. Indeed, their haunting authority has meant they were revered as icons by the Yoruba people.

The story of Ife is shrouded in mystery. There were several extremely advanced civilizations in Africa before the European era, quite unknown to the west, even now. Sculptures like these were made by people with sophisticated artistic values, technology and the means to invest in objects like these. As a small child I used to dream about the "lost kingdoms" of Africa, albeit seen through the distorted image of Rider Haggard and Tarzan comics. The reality of places like Ife, Benin, Zimbabwe, and Nubia is even more remarkable.

And if the story of Ife is amazing, so is the story of how these bronzes ended up in the British Museum. Looted from the Yoruba people by adventurers, real-life Indiana Jones. Even Wole Soyinka, who won the Nobel Prize, gets pulled into a smash and grab raid to return a stolen bronze to Africa. This exhibition should be exciting, an antidote to the omnipotence of the west. HERE is an extremely well written, inspiring article from the Financial Times. Great photos ! PLEASE note, there's another post on this subject HERE. Although this is a classical music site, it's got a lot on African culture and history (and other art exhibitions eg baroque art V&A)
at February 23, 2010

A graceful face indeed. Reminding me of a sole journey to one country of Africa. Though my father did value much African art-he was a sculptor, I must confess I have not felt so much eager about discovering the diverse (much more probably than Europe) art from Africa. It is still the case of many in Mauritius where Malagasy culture has been more or less erased save remnants in music and vaudoo. It is sometimes regarded as a sin from political welel thinkers. But it is truly a pity since truth is not all in religion and values from the West. Artist from the West recognize it. Some Mauritian artists also rely much on appreciation from Westeners. Here also, in a half African island, we have not really lived in a cultured world, even the "we" is in progress, and people were and are still much under commercial influences and difficult work conditions -though there are artists and people trying to strive for art. Yet I have had are but moving encounters elsewhere-with Shauna art in Zimbabwe and Malagasy wooden sculptures in Antananarivo. These make living objects. But perhaps with touristic pressure, they were cheaper expressions.

Re: ‘Kingdom of Ife’ Exhibition at the British Museum.
It is unfortunate that reviewers of the above exhibition in the Guardian, Times, Financial Times, Telegraph, Independent and Sunday Independent have all ignored an important part of Africa’s history which may well have had a vital bearing on the Art of Ife in Nigeria,
Since early in the first millennium AD,and possibly much earlier, Indonesian mariners had been regular visitors to the shores of Africa. The first inhabitants of Madagascar were Indonesians who came via the African mainland; and in all probability the ancient maritime people, the Zanj (Azania, Zanzibar and Tanzania) who occupied east Africa before Arabs and Persians took over were also Afro-Indonesians.
Although they left no written records, there is circumstantial evidence that Indonesians went further and rounded the Cape, and settled along parts of the western coast of Africa, and penetrated up some of the great rivers. Such evidence can be found in the distribution of yams, plantains, maize and a number of other non-African plants; in elephantiasis (the disease famously depicted in an Ife sculpture), which had oriental origins; in musical instruments, for example the xylophone; in crafts connected with glass-making; in the use and distribution of Indian Ocean cowrie shells as ornments and money; and in connections between some of the most fundamental beliefs, such as Nigeria’s Ifa divination and very similar belief systems in the western Pacific.
As it is generally accepted that the technique of cire-perdue casting was introduced to Nigeria from outside Africa, Southeast Asia must be considered as a likely source. It is also likely that Buddhist overtones in some of the Ife figures had a similar origin. Proof is hard to come by; but so much circumstantial evdience pointing to Southeast Asian connections should not be ignored by the critics.

Thanks for this. The west doesn't appreciate non western culture. In fact one newspaper (The Independent) ran what came across as outright racist remarks. The Indonesian connection, the Arab connection and the Chinese too, they don't get enough respect. All these cultures much more sophisticated than they understand in the west. And read what Dodorock above says about Malagasy. I wrote my thesis about Ternate and Tidore culture mix.