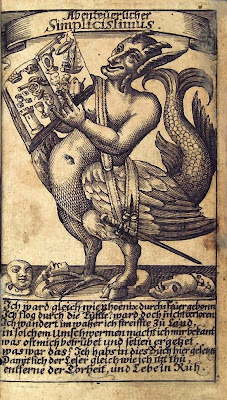 An anti-fascist, anti-war opera written in Germany while the Nazis were in power? K A Hartmann's Des Simplicius Simplicissimus Jugend was a brave act of conscience, even though the opera wasn't publicly performed until 1948.

There's a new edition, recently recorded by the Münchner Rundfunkorchester conducted by Ulf Schirmer. The singing too is way above average, which in itself makes this a top recommendation : Michael Volle, Christian Gerhaher, Camilla Nylund and Will Hartmann. It's live, too, recorded in a small theatre, which adds to the atmosphere. This performance is vividly dramatic. Even if you don't understand a word of German, the impact is clear.

Like the 1669 original, Hartmann sets the opera in tableaux, each act divided into different Bild or Speil subsections, like a series of stylized woodcuts. This formality creates an otherworldy edge to the horrific tale within. A thundering, brooding overture sets the mood of overwhelming chaos. Hartmann's orchestration is spartan: simple trumpets, drums, pipes, a modernist battaglia. From this the male voices develop, chanting in goose-step rhythms.

Simplicius is a "Holy Innocent", so pure he knows nothing of heaven or hell. In Tarot the Fool signifies someone who goes forth into the world without fear, facing danger but protected by his purity. Siegfried without the selfishness. Hartmann sets the part for high soprano though the role is male: Nylund's lucid, clear tones are perfect.

"Beware of the Wolf" warns the farmer (Michael Volle, with solemn bucolic gravity). Wolf of course was Hitler's nickname. Simplicius doesn't know what a wolf is. so when the Landknecht (Gerhaher) appears he thinks the Horseman is the vierbeiniger Schelm und Dieb the farmer warned about. "Weiss nit, Herr Wolf" cries Simplicius but the Landknecht attacks the farm and kills the Knän, die Meuder und das kleine Ursele (these archaic words give the piece a deliberate old world air). Nylund sings a long passage describing the horrors of war, which ends with O armes geknechtetes Deutschland.

Now Simplicius has wised up and heads into the forest where he meets a Hermit (another Tarot figure). The Hermit (Will Hartmann) sings music like stylized monastic chant, wavering weirdly. He teaches Simplicius to sing Unser Vater (Our Father). Give us our daily bread". Simplicius, incorrigibly naive, asks auch Käs dazu? (and cheese, too?) Eventually the Hermit dies, leaving Simplicius to face the world alone. Provocatively, Hartmann writes into the death music an echo of the Kaddish.

Another powerful intermezzo, swirling strings, plunging brass, depicting storm clouds perhaps, as Simplicismus is flown into the Governor's mansion. The soldiers boast of their tyranny and blaspheme. This chorus sound like drunken communal singing in a beer cellar, also a reference perhaps to the Nazis. This time Simplicius pipes up "that's no way to speak". "Can you hear the Mauskopf piepsen shouts the Governer. And of course, Simplicius's music is flute and clarinet. The Governer (Volle) recites rather than sings, not Sprechstimme but oddly discordant. He can't figure the simpleton out.

Then Nylund's tour de force. Words pour out of her at a shrill rapid pace, almost no time to take a breath. Using speech instead of song was a deliberate device by Hartmann to confront the audience. Simplicius harangues the listeners, without music to soften the effect. As she finds her strength her words are supported by drums. A militant but not military march? Then suddenly her voice rises in song. Es dröhnt die Stadt, es stapft daher, schäumende bitt're Jammersg'walt. She's joined by the chorus now representing farmers, the victims of the Thirty Years War. Gepriesen sei der Richter der Wahrheit! sings Simplicius, now transformed into a symbol of hope. Behind her muffled drums and cymbals, the choir now softly humming, and the Specher reminds us that by 1648, 8 million Germans were killed.

Significantly, Hartmann dedicated the 1955/6 revision to Carl Orff whose Carmina Burana used a similar fake medieval context, which the Nazis loved, though they missed the subversive undercurrents. Hartmann knew what it was like living in a police state. More double-edged meaning. Simplicissimus is also the title of a magazine that satirized all abuses of power, military, political and religious. It was based in Munich, where Hartmann lived. While the stylized formality presages Stravinsky's The Rake's Progress, Simplicius Simplicissimus stems from the Weimar tradition of political theatre.

As a plus,there's a half hour discussion with recordings of Hartmann's voice on the second CD in this set. As a minus, this set falls down as there's no translation. One might think that an opera where German-language speech rhythms are so important won't need translation because anyone listening will be fluent. But many of the words are archaic, not that easy for non-native speakers to follow. And non-Germans need to know this opera, to better understand Germany, the experience of war and the role of modern music. Get it HERE 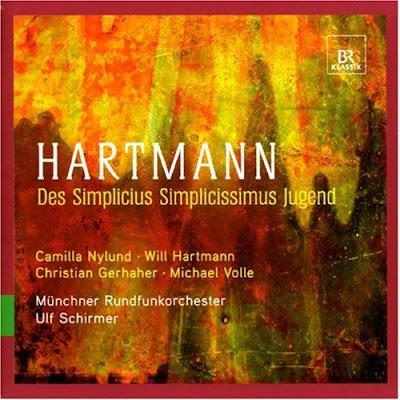