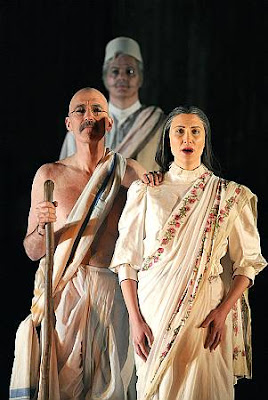 Please note a proper formal review will shortly appear in Opera Today which will be different to these - pithier ! It's a good site, please visit as it's crammed with repertoire commentary and downloads.

Philip Glass's Satyagraha at the English National Opera, at the Coliseum, London, proves that modern minimalism can be extraordinarily moving. The secret is to open your soul, as Gandhi did, when he searched the Baghavad-Gita for inspiration.

Glass's repetitive cadences vary little, so you worry that the musicians will get RSI. Yet listen carefully, and the repeats vary in microtones, gradually shifting gears into different cadences. This unrushed monotony is as natural as breathing. Hindus chant the word "Om" endlessly, until the vibration enters their bodies, allowing their minds to float, beyond consciousness. So it is with Glass's music, informed by other and older traditions than western music.

Once you break free of any dependence on conventional musical form, Glass's strange, hypnotic cadences start operating on you with you hardly being aware. Your focus shifts inwards, beyond outward form. There was exceptionally idiomatic playing from the ENO orchestra, conducted by Stuart Stratford. When the orchestra took their bows, parts of the audience went wild with enthusiasm. Clearly an audience that knows new music, or accepts it on its own terms. Satyagraha is the biggest selling contemporary opera the ENO has produced, and possibly the best.

The text is in Sanskrit, which most people, including Indians, don't understand. This is deliberate because what Gandhi discovered was that words and meaning aren't the same thing. Hence the scene from the epic myth of Arjuna. The hero's enemies are puppets, men with sticks who crumble when moved. Scene titles appear, like chapter headings in books, but what unfolds on stage isn't narrative. Tolstoy and Tagore appear in panels above the stage. You don't really need to know who they are: the idea is that you'll want to find out more, later, when you're "outside the box" of the performance. 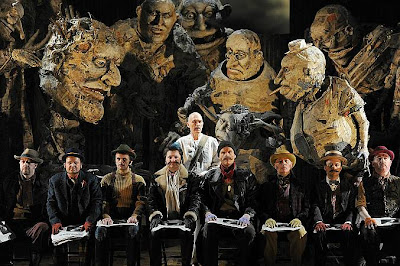 There are so many amazing images in this production that it's hard to take them all in at once. Some are striking, like the giant puppets that descend menacingly on Gandhi, corralled by bigots singing hahahaha. Others are elusive, like the fish which materializes in the second act. It doesn't matter if we don't get them all. Like words, images are hints of meaning, not meaning in themselves. Rarely have I ever seen a staging that expresses the spirit of an opera so well. Because Glass's music is so unusual, and his text obscure, staging in this opera is even more important than usual. Phelim McDermott, Julian Crouch and Improbable and their team have created a theatrical masterpiece which is sensitive and well-informed. 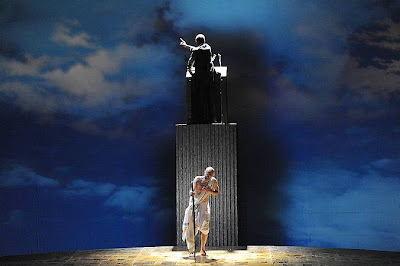 The staging is so atmospheric that the simple clean lines of the Third Act come as quite a shock. Gandhi sits front stage while a man ascends a ladder. The reference is Martin Luther King. who adapted the principles of Satyagraha to the Civil Rights Movement. At the premiere in 2007, I thought this act was too abrupt a change from the sepia-tinted mystery that had gone before, and that the image of King waving to the clouds was contrived, as if designed for American audiences who might not care who Gandhi was. Since then, Barack Obama has become President, espousing similar non-violent methods. No government in the world has coped with the global meltdown or the war in the Middle East. Yet somehow people expect Obama to have solved all that and more in barely a year. Reading some of the hate directed at him makes you remember that we haven't really "reached the mountain top".

On the other hand, the spareness of this Act hones in on Alan Oke as Gandhi. Perhaps it's significant that until this stage in the opera, Oke sings with an ensemble or remains relatively quiet. Now he's centre focus. He sings two extended "arias", the first with its references to "athletes of the spirit" who hold steadfast unto death. The second is more lyrical for he's expressing transcendence. Oke has matured into the part, and is singing with greater depth and dignity than three years ago. He's in his element now. You don't need to know the exact words he's singing, because he conveys their sense with such conviction. Also more comfortable, in the role of Miss Schlesen, is Elena Xanthoudakis: some lovely flights of lyrical beauty. This production is musically even better than before, superb performances all round. Photo credits : Alastair Muir/ENO Please note, these photos are COPYRIGHT and used with permission