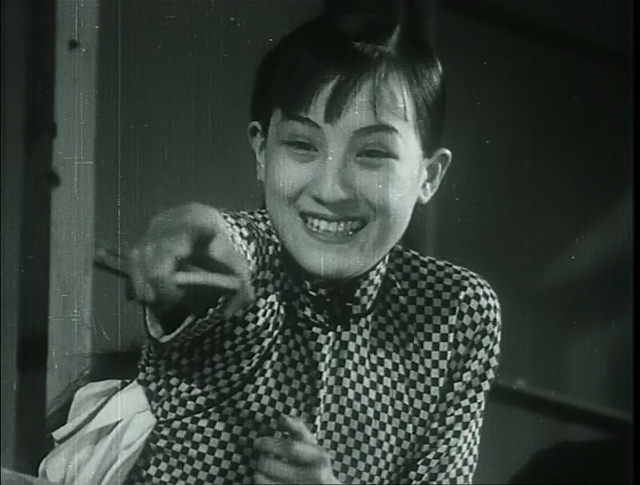 Street Angel (Malu Tienshi) (馬路天使, 1937) is  one of the best-loved Chinese movies of all times. It's "Chinese Weimar" in the sense that it's an art film but deals with social issues. In China, film played a crucial role in modernization. Film could reach ordinary people, and show things more directly than words might do. It's perhaps the best known Chinese film of its era in the west, where its full significance is perhaps lost.  It's certainly not a comedy as some western observers assume. There's also much more to it than love story ! It deals with bad social conditions, in which people are exploited, a metaphor for the fate of China at the time. The hit song itself has a message : when will peace and happiness return ?

It's also an icon because the star, Zhou Xuan (1918?-1957), was one of the great actresses and singers of her time - Monroe, Garbo, Dietrich all in one person, but still, in  Chinese circles revered for what she did and represented.  This was the film that launched her career. Here, she's barely past puberty, but what presence and sweetness! Later she became a diva, but her life was tragic and she died young, which adds to the mystique of this early film. The songs, too, are important. Though they were composed by Hu Leting, via the medium of film they became embedded so deeply into public consciousness that even today the songs are still hits, sung by popstars. Not so different from Heidenroeslien, which many people think of as "folksong" though it's Goethe and Schubert. These songs are beautiful, but they appeal, too, because they evoked an idealized past and nostalgic innocence.

Although there are subtitles to this film, I can't get them to work. But there's a very good translation HERE which you can use. It's good because it explains some of the background. When the people in the film discuss Mexican dollars, they're referring not only to the currency imposed (not by Mexico) in the 19th century but also to foreign control

Nonetheless, Street Angel is fundamentally a story about ordinary simple people and the way they deal with the problems of life. Zhou Xuan plays a very young girl who's perhaps been bought as a child to be trained to make money for the old musician. Her older "sister" (not a real sister, but that's what people called each other) has ended up a prostitute. The implication is that's what's going to happen to sweet little Xiao Hong (which means "Little Red"). Traditional values, perhaps, but the movie is reminding the audience, it's not a good thing, and maybe you don't have to sell yourself to get by. 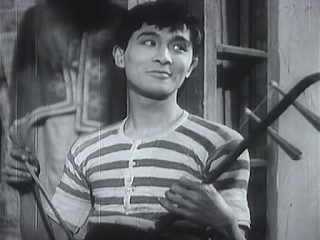 The "hero" Xiao Dan, is Chen Shaoping, the trumpeter. Significantly, he plays the western trumpet in the kind of band that was common in China until fairly recently. These bands used to play at funerals, weddings, shop openings etc marching in the streets, playing a combination of Chinese and western tunes on a combination of western and Chinese instruments. Until I was quite old I thought "Dixie" and "She'll be coming round the mountain" were Chinese tunes. So Chen's job symbolizes something. Xiao Hong gets her hair cut into a bob and moves in with Chen. Chen's a magician, too. Watch that sequence when he gets Xiao Hong pinned to a wall. Significantly, as the film progresses, the "real" Chen emerges. At home, out of the public eye, he plays an erh hu, a traditional folk instrument, which endears him to Xiao Hong a pure Chinese girl.

When Chen and friends help Xiao Hong to get away from the local thug, audiences would have understood the wider meaning: that people can stand up to corrupt society and find a better life. It's also a funny movie - watch the scene where Chen's trying to get business for his friend's barbershop, and who turns up? Bald monks! And then they shave the thug's enforcer, cutting his hair like a traditional baby which is real provocation.

The other characters also connect to other things. One of the men covers his walls with newsprint. That wasn't uncommon in those days when people were desperately poor, but it shows how deeply newspapers penetrated society and spread ideas long after they ceased to be "news". Ephemeral perhaps, but still valid. At the end, the film pans from the alleyway hovel, up over a wall and onto a shot of an idealized skyscraper. A symbol of modern progress, which happens in many films, including western movies of the time. But there's more to it.  The reference is to the scenes behind the opening credits (which include the bronze lions outside the original HSBC offices). Poor people like the ones in this film wouldn't in their wildest dreams go to places like these, so the introduction is a lot more significant than the usual "scenery" introductions that became common in later Chinese movies.

Shanghai was created as a result of the shameful Opium Wars. It became the world's biggest metropolis, with huge textile industries, and the centre of trade between China and the West, but its success was poisoned because it was controlled by foreign states who had "concessions" and extra territorial rights, imposed by military force. They were in China to exploit its resources but ultimately could not care less about the benefits to the country. So the enforced prostitution scenario, and the thgug's bullying, in Street Angel is very pointed indeed. That's the kick that makes this film a lot more than cute melodrama.

The film was made by Mingxing, the studios founded by Lai Man Wai "father of Chinese cinema. Read more about him HERE. The director, Yuan Muzhi, came from Ningpo, like the Shaw Brothers, but what different paths their careers would take. Threy ended up billionaires. Yuan, like trumpeter Chen, declared for the CCP in 1949. Zhou Xuan lived in Hong Kong for a while but became mentallyu ill, and died young.