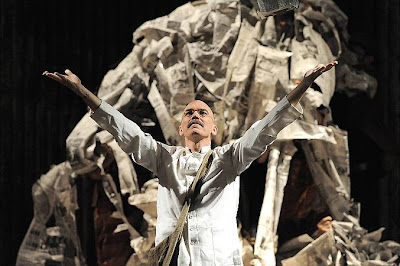 See REVIEW above !
After experiencing Koyaanisqatsi twice, I thought I was inoculated against Philip Glass. However, a friend, who knows the opera insisted that Satyagraha was different, and good. Since my friend's tastes are more conservative than mine, it was a recommendation to act on. We went to the 2007 premiere at the Coliseum. He was absolutely right: Satyagraha is amazing! The ENO production, directed by Phelim McDermott, was streets ahead of the Stuttgart production my friend had enjoyed before.

Satyagraha doesn't sound promising in theory, because it's sung in Sanskrit and Glass's repetitive monotones drone on shapelessly. But for once, that's the whole point, that words alone are meaningless. Real change is brought about when people think and act. The story is set in Mahatma Gandhi's youth, when he still believed that conventional, middle class ideas could change things. While he lived in South Africa, he was a facsimile of the British middle class intellectual, agitating through the press, hoping thus to change the entrenched colonial system.

His big breakthrough came when he switched to direct action. By swapping his tweed three-piece suit for a simple cotton loincloth, he was making a truly radical statement: you don't change the power structure by playing its own games. So no more pamphlets and newspapers, no more polite posturing. The Empire wasn't going to budge an inch. "Satyagraha" means firm conviction in one's beliefs, not pitting violence against violence, but changing the way people think on a much deeper level. It's still a radical approach, and applies today and to many aspects of life.

That's why in the ENO production shreds of newsprint fall from the skies, tying the stage up in knots. Indian peasants couldn't read, but they knew what their livelihood came from. Textile mills in Northern England prospered, marginalizing traditional Indian commerce. Gandhi's battleground was boycotting Manchester and supporting cottage industry in Indian villages. In iteself, that's no big deal, but it symbolizes a truly radical shift in the power structure. So that's why Philip Glass's libretto's in Sanskrit. You have to let go of "words" in order to reach deeper, intuitive understanding. But as the saying goes, "it's easier for a camel to go through a needle's eye than for a rich man to enter Heaven" - ie you've got to ditch the material to reach the spiritual. So Gandhi with no possessions other than his begging bowl brought down the might of the British Empire.

Gandhi's inspiration came from Ancient Sanskrit texts. Appropriately in this production, a primeval battle scene is enacted by gigantic puppets, evoking the juggernauts of Indian tradition. They tower over the stage, and are extremely elaborate and detailed. They are meant to “shock and awe” . But puppets they are, however formidable. As the puppeteers step down from their stilts, the giants disintegrate, and we see that they are hollow constructs made by ordinary men.The image is extremely powerful, and important, because it captures the soul of Gandhi’s struggle. 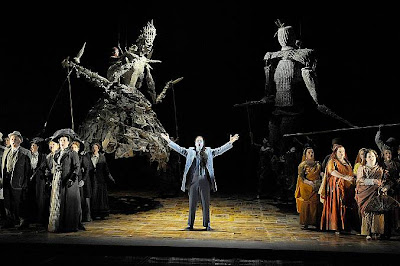 Moreover, the puppets are made of newsprint. The printed word was important, and Gandhi’s journal Indian Opinion was widely read. Throughout this production, images of newsprint appear – banners of paper, as if fresh off a printing press, papier maché creations, images of newspaper headlines superimposed on the backdrop. The images appear relentlessly but ultimately, words alone are meaningless. “Action”, says Gandhi, is a form of “spiritual exercise”. The Satyagraha movement revolved around simple living, focused on idealistic communes where humble tasks were shared by all, regardless of race or status. Later in the opera, as the movement gains momentum through strikes and civil action, festoons of newsprint are torn to shreds, the debris swept away by bands of actors with small brooms – just like peasants in India. Even more striking is the scene where the stage is criss-crossed with what seem to be shining ribbons of light, carefully woven into a maze-like pattern. It’s visually stunning, but the lines are then revealed as sticky tape, transparent but impossible to unravel. 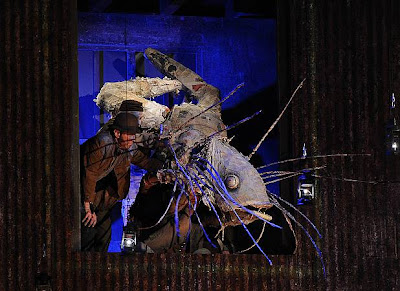 Even Glass’s minimalist technique seems to work in this particular context. The very repetitiveness of it means that a listener doesn’t need to focus on every note. Instead, the imagination can float “over” the notes, so to speak, the better to concentrate on meaning. It’s very similar to Buddhist chanting where single sounds are repeated over and over until they blend into the subconscious, freeing the mind from temporal concerns. It’s not a technique unique to Buddhism, of course, but it works. On closer examination, though, Glass’s music is surprisingly natural, rather like the normal rhythm of breathing. Accordingly, the vocal parts, while demanding, are not forced. Indeed, some sections are quite beautifully lyrical, such as the long aria (if you can call it that) for Gandhi in the Final Act.

In the final act, cadences rise ever higher, “climbing a ladder” aspirationally, just as the Martin Luther King character does on stage. It’s also tricky music to perform, as missing a bar, or fluffing a note would disrupt the organic flow.

Once word gets round that Glass is not to be feared, this production will be appreciated for what it is. I sincerely hope so, because its complicated philosophic content may well be more difficult for audiences to cope with than Glass’s music per se. But it’s an excellent production and deserves to be a hit. Photo credits : Alastair Muir/ENO Please note these photos are copyright and used with permission