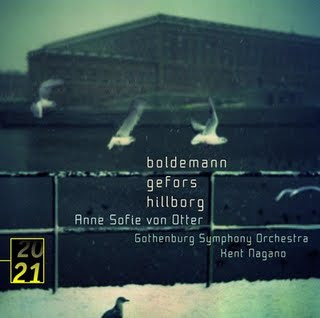 This is the recording which features Laci Boldemann's 4 Epitaphs, which so stunned audiences at Anne Sofie von Otter's recital at the Wigmore Hall in 2003. The 4 Epitaphs are based on Edgar Lee Masters' Spoon River Anthology (1915). That too is a remarkable work. Masters writes fictional epitaphs, each of which tells the story of the person supposedly buried beneath. Ollie McGee denounces her abusive husband. "In death, I am avenged". Sarah Brown tells her lover to tell her husband "There is no marriage in Heaven. But there is love".

Each of these miniatures is so intense that the "personalities" come alive. Laci Boldemann's settings are similarly terse and direct. He gets straight to the point, expressing the "person" by inflections in phrasing and syntax, rather than through ornamentation. The songs feel like speech, just as you'd expect from gritty pioneer folk who don't mince words. The songs are scored for string orchestra, with textures clean and free, evoking wide open spaces perhaps, or the other plane that is death. Amazing songs! A pity we had to wait til 2009 for their release. Anne Sofie von Otter's delivery is perfectly judged, dignified and unsentimental.

A pity, too, that Boldemann set only four of Masters's 244 vignettes. But in a way that clarity illuminates them. Boldemann was an interesting man. His parents were relatives of Aino Sibelius, and they hung out in artistic and music circles in Finland, Germany and Sweden. Nonetheless, Boldemann (1921-69) was drafted into the German Army but luckily became a POW, and spent time in the US. One day perhaps we'll hear programmes with his chamber music and these wonderful songs. I've found THIS but no other details.

Another discovery on this CD ( from DG) is Hans Gefors (b 1952) Lydias sånger. (rev 2003) It's an ambitious cycle, giving von Otter no respite : she has to sing against the Gothenberg Symphony Orchestra for half and hour without a break. Fortunately Kent Nagano conducts with sparse elegance. This is a saga-like dramatic narrative, so the range is demanding, too. The piece is loosely based on Hjalmar Söderberg's novel A Serious Game recounting an affair between a married woman and a music critic, so references to music and literature abound. Texts include Heine, Michelangelo and Bizet's Carmen. Gefors's setting are free enough that his work doesn't feel like an adaptation, but rather a series of mood pieces that create an ambience that may reflect the feelings in the novel rather than literal events. Some gems here, like The Sphinx , an unusual Heine poem that's defied most composers. Gefors captures the enigma. O schöne Sphinx! O löse mir Das Rätsel, das wunderbare!

Another world premiere starts the CD : Anders Hillborg, .....lontana in sonno....(2003) It's atmospheric, and von Otter sings the discursive phrases with sensitivity, matched by Nagano's restraint.

The Gefors and Hillborg pieces were commissioned for Anne Sofie von Otter. She's a wonderful singer, but eventually all singers retire. Hopefully, she'll be with us a long, long time. But she has done so much for unusual and new repertoire, and for Scandinavian music in particular, that her legacy will be greater and more lasting even than her singing. Twenty years ago, there were people who didn't know the songs of Grieg or Sibelius, far less Petersen-Berger or Stenhammer or Boldemann, and big names like Fischer-Dieskau didn't sing them. (Schwarzkopf did, and loved Luonnotar) Partly this is because an inordinate number of these songs are written for female voice - I don't know why. But von Otter has brought them out into the mainstream, where they belong, alongside the great German and French classics.
at February 10, 2010