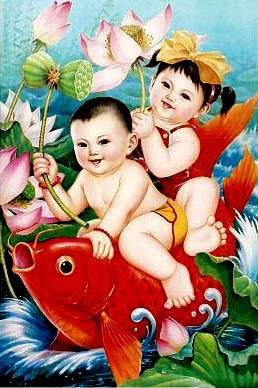 Kung Hei Fat Choy! Sun Nien Fai Lok! Today is the Spring Festival, the first day of the Chinese New Year, the biggest party in the whole year. It's primarily a family festival, because family implies stability and prosperity. Having babies means there's a future, and fat, happy babies mean the present is rosy, too.

At the New Year, people clean the house out thoroughly and redecorate, so they start with a clean slate for good luck to linger. For poor people one simple way to brighten things up is to put up brightly coloured pictures.

This is an example of the typical New Year posters. Two happy babies, one a girl. They're riding on a carp, which means prosperity, and they're holding lotus flowers and pods which symbolize lots. In fact at New Year, everyone eats candied lotus root and lotus nuts. I used to have a favourite poster of a boy with watermelons - green and red and lots of melon seeds, which mean abundance. Another I liked showed the 100 Babies, another popular theme,. In real life 100 babies crawling on each other might not be so much fun.

These posters were cheaply mass produced , noit meant to last like works of art, but they were a lot of fun. They were also a quick, direct way of communicating with peasants and humble folk so they acted as a kind of "newspaper" for those who couldn't afford, or read newspapers. Much has been made of how images of Chairman Mao became part of the mythology. So what? Mao was a revered figure, a kind of modern God, So why wouldn't people use his picture as an image of success? It's not merely propaganda. Like films, posters were a vehicle for disseminating modern ideas. That's why there were posters of happy babies in space suits, driving cars or tractors and holding objects of value like TV sets. That's how folk traditions rejuvenate. They welcome the new, not reject it.
at February 14, 2010