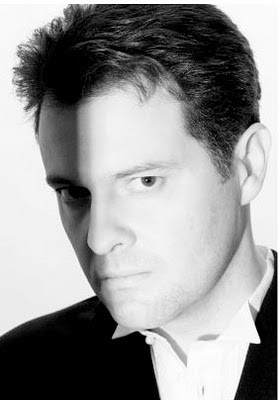 Mark Stone is a "rising star" on the song and opera circuit - he's currently The English Gentleman in Prokofiev The Gambler at the Royal Opera House for example. As you can see from this photo, he's got presence! He also runs his own recording company Stone Records. Latest release in a good series is The Complete George Butterworth Songbook. This really is the first complete recording of Butterworth's songs, which makes this CD a must for anyone into English song, as well as for anyone who likes Stone's elegant baritone.

Ralph Vaughan Williams may be the big name in English music, but without George Butterworth, there might not have been RVW, at least not as we know him now. They were friends in English folk music circles, but it was Butterworth who pushed RVW to write symphonies.

In fact RVW's 2nd Symphony, "London" is dedicated to Butterworth who was instrumental in pushing RVW to write it. Butterworth himself was eclipsed because he burned all his unpublished work when he went to war in 1914. Mysteriously, he told no-one in the army that he was a composer.  A fascinating story - what went on in the mind of that repressed, brooding figure? When Butterworth was at Oxford, a don is supposed to have remarked, "There goes more Red Revolution than in all Russia" - this after the 1905 uprisings!

That's why Butterworth's songs are interesting. They're not as sophisticated as the lovely orchestral piece, Banks of Green Willow, Butterworth's best known work, but they reveal a more personal, contemplative side to the composer.

The two best known cycles, A Shropshire Lad and Bredon Hill are to poems by A E Housman. Housman was also fascinated by a mythical English past, populated by hunky yeomen doing manly things in pastoral landscapes. On a deeper level. though, they deal with Housman's inner issues, so they're quite modern in many ways. Housman's protagonists often reveal their vulnerable, naked necks: a metaphor perhaps. Because both Vaughan Williams and Butterworth set the same poems at the same time, it's easy to compare their different approaches. RVW's versions are freer and more lyrical, which is why they're such masterpieces. Butterworth's are very good, and perhaps more thoughtful, as if the composer has sensed that he might have more to say when he's more mature. Except that Butterworth neve did mature. He stopped writing when he became a soldier. Had he survived, what might have emerged from his creative hiatus?

Butterworth's Bredon Hill is observant, the "noisy bells" pealing in circular patterns, warning the young couple that they can't escape. Mark Stone and Stephen Barlow realize that what makes Butterworth is sincerity: more restrained and introspective than RVW but assertive. In On the Idle Hill of Summer, Butterworth creates a very subtle strangeness, where the line wavers, the way summer haze blurs firm boundaries. Stone's clarity blends well with the delicacy of Barlow's playing.

What makes this recording important, though, is because it includes rarities, even Requiescat, a miniature based on Oscar Wilde juvenilia which Butterworth makes surprisingly touching. The cycle, Love Blows as the Wind Blows, is to poems by William Ernest Henley. R L Stevenson based Long John Silver on Henley, who had one leg and a big personality, though he wasn't a pirate. Christopher Maltman and Roderick Williams have this in their repertoire, but recordings are hard to come by. Stone's voice is more flexible than Jonathan Lemalu's, so Stone's performance is more nuanced.

The Eleven Folk Songs from Sussex were based on real folk songs "collected from the wild" so to speak. Butterworth assiduously collected folk song and dance because he wanted to preserve what was left of pre-industrial popular culture. His settings are probably faithful to the originals, but they're art song, too. Folk tradition isn't fixed, but changes and grows, as Butterworth knew. There's a nice clip of Stone singing A Lawyer he went out on his website HERE. It can't have been lost on a man as sensitive as Butterworth that folk songs dealt with grim subjects, even when their melodies were jolly. Twentieth century emotional dissociation? These ditties aren't "simple". Stone's singing gives them dignity. For these alone, this disc is significant.

As an extra bonus, there's a short clip of a film made on 12th June, 1912. Butterworth is Morris Dancing, apparently, in Kelmscott, that centre of Arts and Crafts aesthetics. Morris dancing was "new" to art then, having been observed by the middle classes only in 1899, when Cecil Sharp happened upon a troupe of Headington locals dancing on Boxing Day. For Sharp and his followers, this was a Damascus moment, which shaped their future lives. I've seen stills before, but never the whole film. Brief as it is, it's a remarkable document because it shows how carefully formal the dancing was, part ethnographic record, part pleasure. Butterworth is the short, stocky fellow with a moustache, exorcising his repression with jigs, bells and colorful ribbons.

Please also see my review of Roderick Williams's complete Butterworth songs   Williams is much more experienced and is a specialist in this genre, so any comparisons aren't fair. Serious Butterworth fans need both. Stone's recording  was the pioneer, and it has extremely good programme notes - the Naxos one are rubbish. Beside, Stone Records is an enterprising independent company run by musicians.  Naxos isn't. 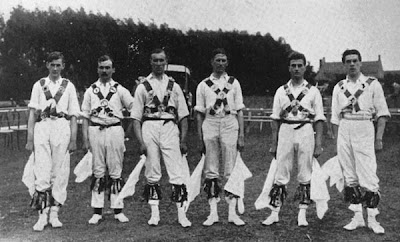 thanks for the heads up!