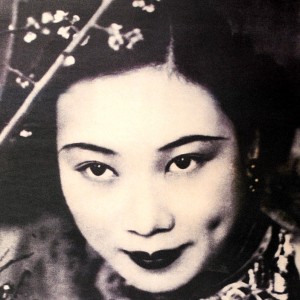 The name "Butterfly" suggests fragile beauty but Butterfly Wu was a survivor, whose life reads like a lurid novel. Butterfly Wu (Wu Dip, Hu Die 胡蝶) made her first movies in Shanghai as a young girl and became a megastar. She was the real "Lady from Shanghai" before Marlene Dietrich. Jean Harlow and Marilyn Monroe. Her name was a byword for beauty, but she was admired because she was strong and resourceful. Her life is like a chronicle of moderrn China.

Because Butterfly Wiu was so prominent, she was courted by warlords, and adored by film goers, to whom she was an inspiration of ideal Chinese Womanhood. Then the Japanese attacked China. Millions were killed, even more millions forced to move round the country as refugees. Yet in the midst of war, Butterfly Wu found love. In her native Hong Kong, she married a businessman, but the Japanese conquered Hong Kong, too. Because of her high profile, Wu Dip had to be smuggled out into Free China, pursued by Japanese agents. She wasn't safe there, either. General Dai Li (戴笠), head of the terrifying Chinese secret police, became infatuated with her and threatened to kill her husband unless she became his mistress.  Dai Li, who made the Gestapo and NKVD look like amateurs, died in a plane crash in 1946, possibly assassinated. Wu Dip and her hiusband were reunited, but he suffered ill heath, possibly a result of being tortured and imprisoned..

Wu Dip continued to make movies until 1967, so her career spanned several golden ages of Chinese cinema. Because she's so closely associated with pre-war Shanghai, her contribution to Cantonese cinema is undervalued.  I've been watching "A Gratitude as Weighty as the Mountain" 恩重如山 (a quote from poetry) made in 1962.  In this film, she stars with Lam Ka Sing, who plays her son. He was an extremely famous opera singer and actor.

A young woman's lover is  moving with his school into the interior of China. She's left behind and is bombed out and homeless. She falls into the hands of a man who rapes her and sells her into prostitution. Meanwhile, she's given birth to a son, named Tak Ming. Eventually, she escapes the crook and starts a new life in Hong Kong where she works as a bone massager, not quite prostitution but shameful. She had earlier given up her son to a kindly neighbour, who brought him up in South East Asia, so he would have a chance for a better life.

When the boy grows up, he returns to find his mother, but she pretends that his real mother is dead.  The son  goes to university and gets a job with a wonderful boss, who treats him as his successor.. Everything seems perfect, but he discovers that the woman who is looking after him a masseuse. He renounces her violently. How can she shame him so? The film contrasts the arrogant son with his self-sacrificing mother. He has a fancy western education but she has proper values. She is the one to whom he owes "gratitude as great as mountains". Throughout this film, it's strong female characters who help others and do virtue.

Then boss and rejected masseuse meet. "She is your natural mother", says the boss. "And I'm your natural father". The complication is that Tak Ming has made the boss's daughter pregnant. Scandal is averted when father reveals the daughter was a foundling, so the young couple can marry. This might sound like a crazy plot device but it was a genuine concern  in those days, when so many families were disrupted by war. No doubt there were real life stories like this. No wonder people turned to movies, which reflected their own pasts and anxieties.

When Wu Dip retired and moved to Canada, there was a retrospective of her films on TV. I watched with my grandmother who was herself a Shanghai belle.
at February 17, 2013