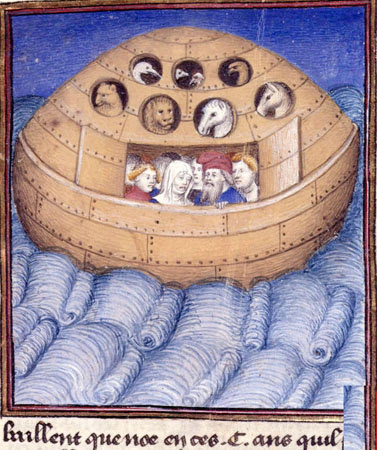 Benjamin Britten's Noye's Fludde is on at Blackheath Halls.  Here is a link to my review.  From what I've heard this promises to be a particularly spirited performance. Certainly lots of enthusiasm, which is critical, because most of the cast is made up of children. Enthusiasm is far more important than fine singing where children are concerned. Noye's Fludde was written, in part, to get children excited about performance. Absolutely, they're the key to the whole opera, even though the three adult parts are taken by professionals: Matthew Rose is singing Mr Noye. Delightful orchestration, full of unusual sound effects.  This is an opera that absolutely needs to be experienced live, because it is the children, and their joyous engagement, who make it work.

Noye's Fludde is seminal Britten, too, for it captures so many themes dear to his heart. Children are given respect, even more so than adults. Like animals, children are fundamentally innocent. Noah saves them from the Flood so they will renew the earth. The cynics who doubted God's word are annilhilated. Perhaps in Noye's Fludde, Britten is re-enacting his own antediluvian ideals.

For background, read Claire Seymour's The Operas of Benjamin Britten : Expression and Evasion (Boydell), wherre there's a whole chapter on this short one-act opera. Noye's Fludde may be small scale, and "community" based but it's a serious work of art.  For Britten, integrating community with "high" art was a statement of faith. Creativity should be part of normal life, not elitist exception. Britten's interest in early music connects, in part, to the way in which music was created in the distant past, by "ordinary" people creating mystery plays and such. Significantly, the first performance of Noye's Fludde took place in Orford Church, with local people.

Below, the film in which Britten speaks about the first performance, courtesy the Britten Pears Foundation.