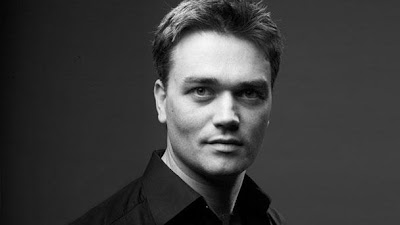 Edward Gardner's been appointed Chief Conductor of the Bergen Philharmonic Orchestra. starting October 2015. Some media reports suggest that he's doing it for the weather as it rains a lot in Bergen.  So what does it really mean?

Gardner is the Great Hope of British conducting, often compared to Simon Rattle,  He's a good conductor, and very charismatic. He flirts like a pro, too. It's part of the job! His career has implications for the British music scene as a whole.  It's been five years since Gardner shot to prominence as Music Director at the ENO. Before that he was relatively unknown, though he'd been head of Glyndebourne On Tour, where Robin Ticciati  is now before taking over the main Festival in 2014. Gardner has worked with numerous different orchestras and is currently Principal Guest Conductor at the CBSO, whose Chief Conductor is Andris Nelsons. Gardner neeeds  significant international tenure to expand his CV.

Although Bergen is a  fairly small town, (pop under 300,000), it's culturally significant.  The orchestra was founded in 1765, which makes it contemporary with the Leipzig Gewandhaus Orchestra.  It's significant that Gardner takes over in 2015, the 250th anniversary of the orchestra's foundation, when all ears will be on Bergen. Gardner has conducted this orchestra many times before, so they already have a good relationship. Bergen also punches above its weight because it has a strong recording profile, but Gardner is a much more interesting conductor than some the orchestra has had in the recent past.  Gardner's also contracted to Chandos, who plan major initiatives with him and with Bergen in future years. Gardner's best known for conducting opera, so Bergen will consolidate his reputation in the orchestral mainstream. It will also mean high profile recordings, which will reach international audiences. Maximum impact! Gardner (and his management) are shrewd. He's not going to Bergen for the scenery. He's being positioned for greater things in the longer term.