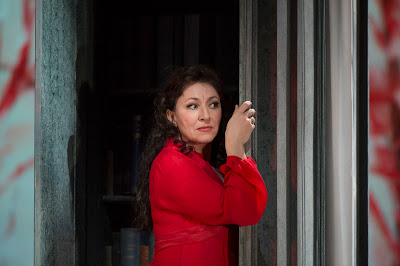 Kaspar Holten's production of Tchaikovaky's Eugene Onegin was eagerly awaited; the new Artistic Director of the Royal Opera House is a man of ideas. What vision would he have in store for us in his first London production? The curtains revealed a gorgeous set, in glowing jewel colours - greens, blues, with Tatyana dressed in scarlet. Except there were two Tatyanas.  Stick-thin Tatyana (Vigdis Hentzer Olsen) was a ballerina, acting out the letter scene in jerking, twitching spasms. It's true that the Young Tatyana confuses fantasy with reality.

Certainly, the idea of Tatyana with a will of iron is one worth developing, especially with Krassimira Stoyanova in the role. She throws herself into the part so well that occasional squally phrases seem part of Tatyana's extreme personality. But she's forced to stand aside, and the intensity of the scene disintegrates. The rest of the household is eclipsed, despite fine performances from Diane Montague, Elena Maximova and especially Kathleen Wilkinson. Shorn from context, Tatyana's dreams of an alternative to her dreary life are reduced to mere tantrum. There's more to Tatyana than this. Stoyanova, with her heft and range, indicates how much is missing but she's undermined by the staging. 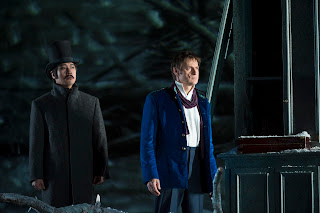 Holten's basic concept is that Tatyana and Onegin are looking back on their youth, which is perfectly in keeping with Pushkin.  It could work. Perhaps Onegin and Tatyana haven't matured even if they've grown older, but it's an idea that needs developing more than simply through the use of doubles. With his background in athletics, Simon Keenlyside moves well enough that he almost matches his dancer double, Thom Rackett, but isn't given much with which to define Onegin's personality.

Dance is integral to this opera, not only because it's Tchaikovsky, but because the composer uses dance as a metaphor. Madame Larina's guests dance a cotillon. Its strict formation emphasizes the conformist nature of the society in which they live. The dance is a form of mating ritual, a reference to the fertility of Nature, and to Mother Russia, eternally renewed with each passing generation.  Instead we get a sheaf of corn propped up against a wall.

There is a difference between décor and staging. Décor is nice, but staging should add meaning.  These designs, by Mia Stensgaard and Katrina Lindsay, turn this Eugene Onegin into a TV costume drama. That will please audiences who think no further than period costumes, and don't care whether a staging reflects the opera. Even Deborah Warner's staging for the ENO where the audience applauded the scenery, said more about the shallow, materialist society in this opera than Holten's does. (Read more here).

This production disconnects not only from the inner drama, but more worrryingly, from Tchaikovsky's music.  The interlude between Acts 2 and 3 depicts Onegin's exile. It can be turbulent, soul-searching, even disturbing. What we see are a few ballerinas  in gauze, dancing like wraiths. Maybe Onegin is seeing the ghosts of his past, but it's introduced at the expense of a much deeper level of interpretation.  The aristocrats are dancing, too, acting out rituals of wealth and social precedence. "It bores me", sings Keenlyside with heartfelt sincerity. We don't need to see them, but we should hear them as an impenetrable wall of sound. Tatyana and Onegin have to hide their feelings, but Tchaikovsky can express what cannot be sung through the orchestra. Robin Ticciati might tell us, even if the staging doesn't. What has Tatyana chosen by marrying Gremin (Peter Rose) and rejecting romance? Pushkin, Tchaikovsky and Onegin all knew just how overwhelming society could be. There's no sense of fatalism in this staging, but plenty in the music. A conductor needs to reflect what's happening on stage, but Ticciati is too obedient. He's good but he needs to be more independent and assertive. 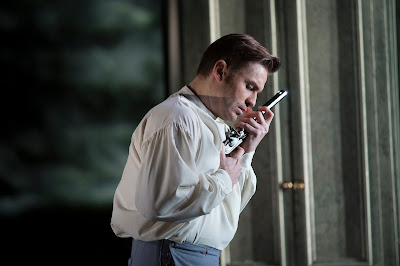 Pavol Breslik as Lensky makes this ROH Eugene Onegin an absolute must.  This was a superlative performance. Breslik's voice is seductive, suggesting depths of Lensky's character that most productions skip past.  Breslik's "Kuda, kuda" is so full of feeling that one thinks of youth, energy, beauty. A male version of Mother Russia, perhaps, a life force that's extinguished for reasons we can't comprehend.  The duel scene is staged so badly that it's barely obvious that Lensky lets himself be shot, which is fundamental to the interpretation of the work. Were it not for Breslik's singing, or for Jihoon Kim's demonic Zaretsky, we'd be none the wiser.

Kaspar Holten's Eugene Onegin is worth going to, despite my misgivings, because it is provocative. It makes you think, even if not quite in the way Holten intended. That, for me, is much more important than the merits oif demerits of the staging: opera should provoke and stimulate. Even if we don't agree, we're using our minds.  It's infinitely better that Holten engages us than if he played safe.  He's not boring!  Let's face it, London is not ready for Kryzysztov Warlikowski and his absolutely outstanding Eugene Onegin, also with Pavol Breslik. Read more about that here.  Holten could ease London audiences gently into a brighter future. With him, the Royal Opera House is in good, if quirky, hands.