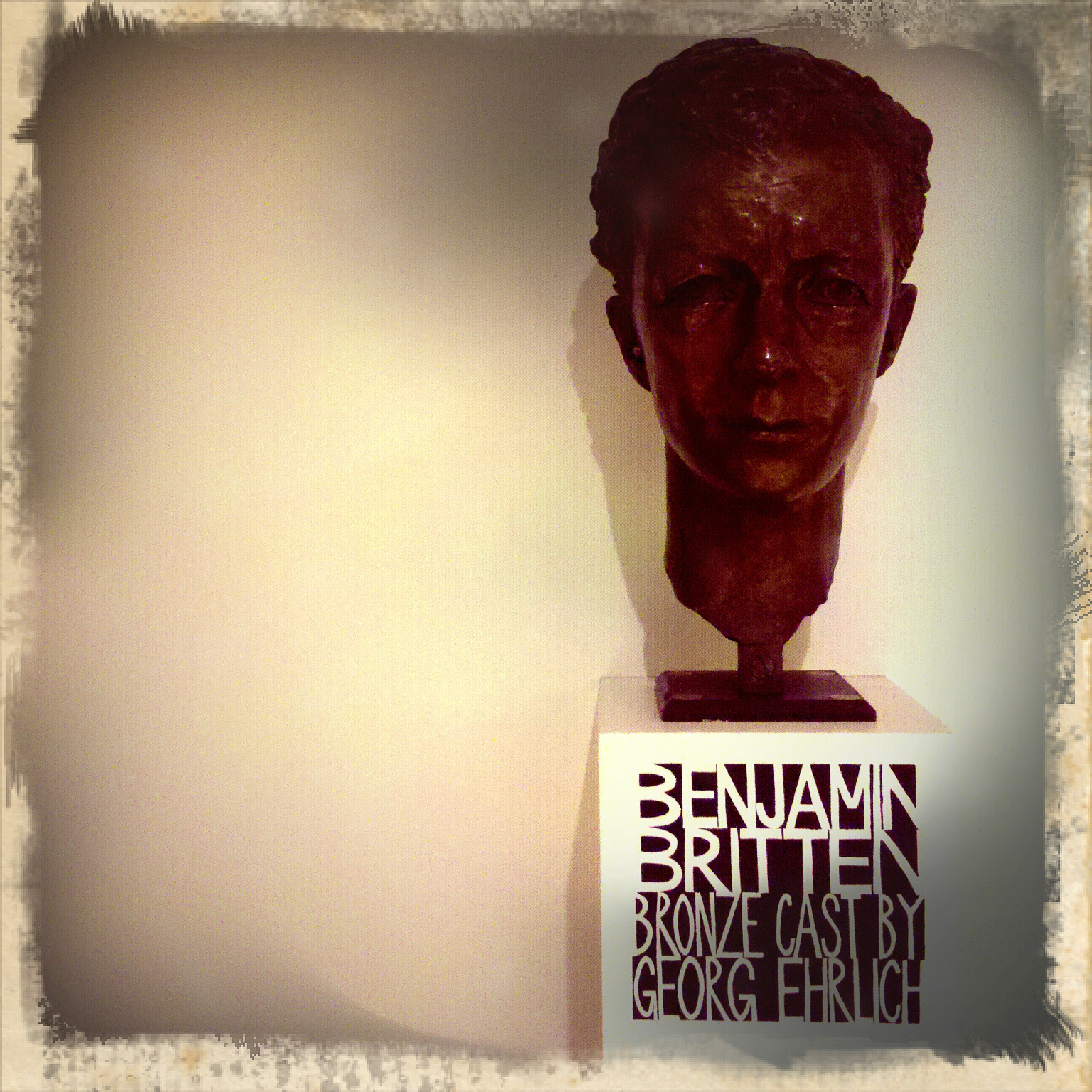 Biography is a way into a composer's mind, especially one as enigmatic as Benjamin Britten. He veiled his emotions, expressing them obliquely through the abstraction of music. Indeed, his emotional reserve makes his music a challenge. Listeners who want heart-on-sleeve sentiment can't penetrate his reticence. Britten's edginess doesn't conform to any formula. Perhaps that explains why the media is obssessed with his sex life. It's easier for small minds to seize on gossip than to listen to his music, or ponder Britten's whole persoanlity..

When the Jimmy Savile scandal broke, the Daily Mail ran a story demanding that the BBC "acknowledge" Britten's obssession with boys. But Britten's interest in boys is no secret.  He was no Jimmy Savile, callously harming vulnerable victims, and getting away with it because he was a public figure. The Daily Mail is a tabloid, and tabloids thrive on sensation, not journalism. Its target market couldn't care less about Britten as composer. That article was written during a completely unconnected scandal that led to the resignation of the BBC's Director General. This is relevant because it puts the article into context.  The story ran on 26th October 2012. but on 21st November the Guardian ran a similar sttory, adding noithing new. Of  course it matters if Britten were a Savile, but all the evdience points to the probability that Britten did not act on whatever he might have felt. There is a difference. Throughout his whole career, Britten vehemently protests the loss of innocence. His pacifism was fuelled by passionate opposition to injustice and exploitation. Daily Mail intellectuals can ignore the music. The rest of us can't.

Much of the problem the media have with Britten is that he was gay. Homosexuality was illegal in his time. Careers could be destroyed by the least hint that a man wasn't exclusively hetero. Britten was never dishonest about his orientation. So what if he didn't march or make a fuss? No-one should be forced to express themselves  in any specific way. Peter Grimes, Billy Budd and Owen Wingrave, all show how Britten supports the individual against mass conformity.  Media obssession with Britten's sexuality delimits any attempt to really come to terms with the man and his music. If we don't respect people as individual, complex personalities, we might as well pin pink triangles and yellow stars on people, treating them as categories, not as human beings.

That's why we need intelligent biography, so we can appreciate Britten as a uniquely creative individual. No biography can ever be exhaustive, so a certain degree of speculation is necessary. But any speculation must be based on a reasonable interpretation of whatever evidence is available. Answers aren't nearly so important as the process of evaluation.  Currently I'm reading Paul Kildea's Benjamin Britten : A Life in the Twentieh Century (what else? Grin!), and Neil Powell's A Life in Music . Kildea is worth reading because he's Kildea, but neither adds much to Humphrey Carpenter's seminal Benjamin Britten: A Life, first published in 1992. Nothing comes close. I'll be writing more over the next few weeks.

Please see lots more on Britten on this site, and about Aldeburgh, British music and 20th century music in general. In fact,  there's probably more on Britten and his background here than on any non-Britten-specific site.   Different Britten : Aldebuurgh Music Festival 2013, for example.
(photo : Michael Ambjorn)

Email ThisBlogThis!Share to TwitterShare to FacebookShare to Pinterest
Labels: Britten

Thank you for an excellent article. I would like to second your enthusiasm for the Humphrey Carpenter biography. With that book in mind, I would like to elaborate on a phrase you used, namely "the probability that Britten did not act on whatever he might have felt". The impression I get from all I've read about Britten is that — far from repressing any illicit feelings — Britten DID act on his feelings. It's just that those feelings were in no way overtly sexual. His desire was to re-enter the world of his boyhood, not to impose a premature adulthood on whichever boy was at the time the object of his affections. As you so well point out, loss of innocence is the great tragedy at the heart of so many of his works. A Jimmy Savile would have struck him as the destroyer of everything he held dearest. He was hardly likely to such a sexual predator himself.
Please keep up with your excellent writing. I read it every day with great pleasure.

I was referring to whether Britten used boys inappropriately. He probably didn't even if he might have had inclinations, which I doubt. If anything he seems to have been a fairly asexual person. Some of the boys have said they thought he was more of a boy than they were. Perhaps with boys he could be a boy himself again. Which is not at all the same thing as misusing them

"Throughout his whole career, Britten vehemently protests the loss of innocence. His pacifism was fuelled by passionate opposition to injustice and exploitation."

Exactly. I haven't much sympathy either for "politically correct" gays who claim Britten's work is irrelevant because it's about a closeted world they can't understand. But his pacifism is not closeted at all, and he was vehement about it when it was hardly a popular attitude (during WW2) as well as afterwards; it is integral to Billy Budd and the War Requiem.