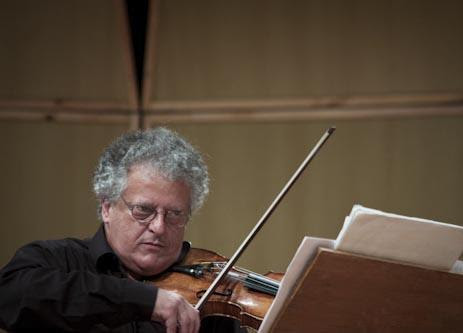 Wild weather outside the Wigmore Hall on Halloween Night, but the Arditti Quartet sparkled, revitalizing what has been a relatively bland five months in London music (with a few notable exceptions).

Brisk start to proceedings with James Clarke's String Quartet (2002-3) in place of the scheduled premiere of Clarke's 2012-5 for two string quartets. The JACK Quartet were due to join the Ardittis for this, but Hurricane Sandy intervened. No worries, since Clarke's String Quartet was commissioned for the Ardittis in the first place.They played with brio, relishing its zany, almost-but-not-quite anarchic delights. Ecstatic audience reaction.

Hans Abrahamsen's serene String Quartet no 4 (2012, UK premiere) was somthing of an odd man out in an evening of musical bourrasque, but I loved it. It's beautifully constructed in four movements, starting in a pitch so high it seems ethereal. Abrahamsen calls this movement "hoch im Himmel gesungen".  Arditti's bow scarcely seems to move, but amazing sounds emerge. Ashot Sarkissjan shadows the first violin, ghost-like, adding depth. The earthiness of folk melody, translated in graceful refinement.  A jam session for samisen and koto? Cello and viola (Lucas Fels and Ralf Ehlers) reinterpret the first movement in rumbling low pitch. Pizzicato reinforcing the idea of samisen and ancient instruments.  "Big black raindrops" says Abrahamsen in his notes. Joyous purity, good-natured poise.

"Fletch" refers to the feather placed on the end of an arrow to stabilize it in flight. You don't need to know this to follow Rebecca Saunders's Fletch for String Quartet (2012, UK premiere) since so much of her music moves like physical form. Great forward thrust and balance, purposeful.  Even her programme notes sound musical  "....this elemental sonic gesture is an up-bow sul point double-harmonic trill, often with fast glissando, crescendo-ing rapidly out of nothing to fortissimo....surface, weight and feel are part of the reality of performance. The weight of the bow on the string the differentiation of touch of the left-hand finger on the string...feeling the weight of sounds is an integral part of the composing process.... being aware of the grit and noise of an instrument, tracing the essence of the fragments of colour within a confined and reduced palette of timbres and exploring the physical gesture which creates a fragment of sound"  Anyone who still thinks modern music isn't emotional needs to hear Rebecca Saunders. Her music moves sensually, as if it were a living being, alert, sensitive, eclectic.

Before Hurricane Sandy, the Arditti and JACK Quartets were planning to play Mauro Lanza's Der Kampf zischen Karneval und Fasten for octet ( 2012, UK premiere).  One can imagine what that might sound like! Instead, the Arditti Quartet played Wolfgang Rihm's String Quartet no 13. Explosive attack at times, vigorous.  A deliberately deceptive ending to further throw you off balance, in a nice way. Listen to the August 2012 performance at the IMR HERE.