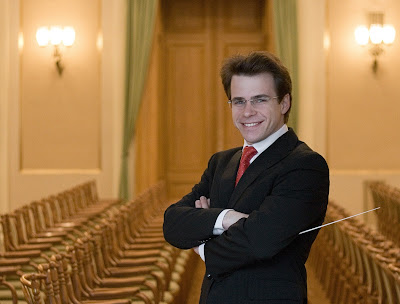 Many performers get attention because their youth excites some sections of the press. But Jakub Hrůša has solid experience without attracting the media circus. He's Music Director of the Prague  Philharmonia and has conducted all over the world. He's recorded extensively for Supraphon. He's Music Director of Glyndebourne Touring Opera, which is a significant force on its own. I first heard Hrůša conduct Mozart Don Giovanni at the Glyndebourne Festival in 2010 and was even more impressed by his Britten Turn of the Screw in 2011   No chance would I miss hearing him conduct the BBC Symphony Orchestra at the Barbican, London.

Surprisingly, publicity for this concert was very low profile, especially given that Hrůša, a Czech music specialist,  was conducting the British premiere of František Jílek's arrangement of the suite of Leoš Janáček's The Cunning Little Vixen. Jílek (1913-93) was one of the important Czech conductors of his time, closely associated with Brno, Janáček's home turf. Jílek and Charles Mackerras were men of the same generation, but Mackerras dominated Janáček performance in the west, and Jílek remained behind the Iron Curtain. Although Talich's orchestral suite on The Cunning Little Vixen is better known, and in the Mackerras revision, Jílek's suite deserves more attention.

Jílek based his suite on the whole opera, whereas  Talich concentrated on the first act. Jílek used Janáček's original orchestrations and concentrated on the non-vocal aspects of the work. Jílek chose carefully, including passages from the scene where the Vixen comes to sexual maturity. If The Cunning Little Vixen was informed by Janáček's relationsips with women, this passage is crucial to meaning. Please read my article Janáček's Dangerous Women and many other articles I've written about this opera, (use labels below). Jílek also emphasizes the transformation music in the finale, where the Forester dies, and is reunited in spirit with the Vixen. This section is in many ways, the whole point of the opera, for it links themes of rebirth, regeneration and the cycle of Nature. The Cunning Little Vixen marks the beginning of the most fertile phase of Janáček's creative career, so Jílek's Suite works as a study of the opera and of the composer himself.

Like most Czech musicians, Jakub Hrůša probably imbibed Janáček from birth, but he's able to assert an individual stamp on his performance. He thrusts the music forward, yet marks the breaks with sharp definition.  This creates a combination of attack and tension, an angular energy that expresses the spirit of the Vixen, an animal who lives by her wits, surrounded by danger.  Conductor body language can often be "read": Hrůša points both hands downwards, fingers angled like a toreador, marking his point so it's unmistakeable. Later, he cups both palms in a rounded gesture, releasing the elegant lyricism in the finale, so it's illuminated like a halo.

Another reason this concert was interesting was the world premiere of Rolf Hind's most extensive work to date, The Tiniest House of Time, for accordion and orchestra, with James Crabbe as soloist. "The accordion is cast as shaman-magician, party-animal, healer, rabble rouser" says Hind. Hence, perhaps the lively but controlled cacophony, wacky, swaying rhythms. Hollow metal sounds, folk-like bells, deep booming basses and low brass.  Three of the four sections are inspired by Persian poets (Rumi and Kabir), so the suggestion of dervish dance is prescient.  For me, the relationship between accordion and orchestra was paramount.  An accordion functions when air is squeezed through its chambers, shaping and elongating sound. The keys are played like a form of piano. Hind uses wind instruments to extend the idea of breathing, and strings and harmonium to reflect the idea of tinkling keys. Later in the piece, the string players hit the air with their bows, using invisble air just as the accordion does. The sound is only just audible, but the connection is clear. Hind's instrumentation also calls for wind whips, which create whirring noises when they're waved by the percussionists. The concept works fine as sound, but distracts visually.

More vaguely Persian exoticism in Rimsky-Korsakov's Scheherazade op35 (1888) which followed, rather eclipsing Rolf Hind, whose work would have fared better in a more contemporary programme.  Scheherazade is so ubiquitous that everyone knows it, even if only through movies and TV ads.  In the concert hall, this poses a challenge. How to make it sound fresh and original? Hrůša's approach was to conduct it as if it were entirely new, its ideas undimmed by familiarity. Colours are kept scrupulously clean, so they dazzle. Hrůša and the BBCSO bring out the vivacious sparkle in the music. Scheherzade's tales are beautiful, but if she doesn't outwit the Sultan he will kill her, like he's killed so many women before. So the sour note in the woodwinds is perceptive, reminding us that beneath this glamour lies danger.

The solo violin (Stephen Bryant) and harp (Sionead Williams) mingle flirtatiously, but is this a duet or a duel?  Hrůša doesn't stint on the hyper-romantic luxury in the score, but does not muddy it in indulgent swoon. Details are carefully observed, like the military rat-a tat-tat of the small drum, supported by tambourine. These lovely tales unfold against a backdrop of fear.  Hrůša shows that Scheherazade and the Cunning Little Vixen are sisters, both using their charms to survive in dangerous environments.