Ollie Alert - Knussen at the Barbican 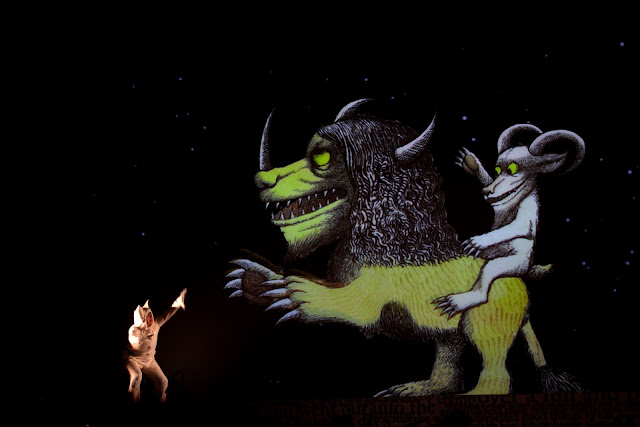 Tomorrow at the Barbican - Oliver Knussen Total Immersion. Actually, it started this morning with the high level conference (more here). Tomorrow Knussen's zany, anarchic but magical double bill based on Maurice Sendak, Higgelty Piggelty Pop! and Where the Wild Things are. Read about the Aldeburgh performances HERE to get a taste of what to expect.  Photo shows Claire Booth battling demons - credit Eamonn McCabe. Netia Jones's staging captures the zany, whimsical spirit infinitely better than the lumpen, overly literal Glyndebourne production many years ago, which I've just seen. You DON'T need large adults in animal costumes to act the Wild Things because the Wild Things exist in the kid's imagination. In any case, Sendak's drawings are visually part of the experience. Sendak was involved with the Glyndebourne production but he was not a theatre person. Netia Jones is. Her projections move like magic and light, and the adults who do sing are recognizable "not" caricatures but people transformed..

Netia Jones's stagings are good because they don't burden the music with excess baggage. Her Before and After Life was fascinating because she combined three works by Tippett, Britten and Finzi. Each of them so very different, yet she intuited the common threads that link them. Read what I wrote about the London premiere in 2010 HERE.  Coming up next year, Netia Jones is doing a staging of Kurtag's Kafka Fragments at the Linbury where seating is so tight I can't go unless I get an aisle seat and they're sold out already.  But it is top of my must-do list because I'm so passionately into the piece, having written about four different performances. I can imagine Jones doing it intelligently. Read about the András Keller  and Juliane Banse performance at the Wigmore Hall  HERE. There are levels in the piece which only come through abstraction, which I think Netia Jones can access better than most.
at November 02, 2012