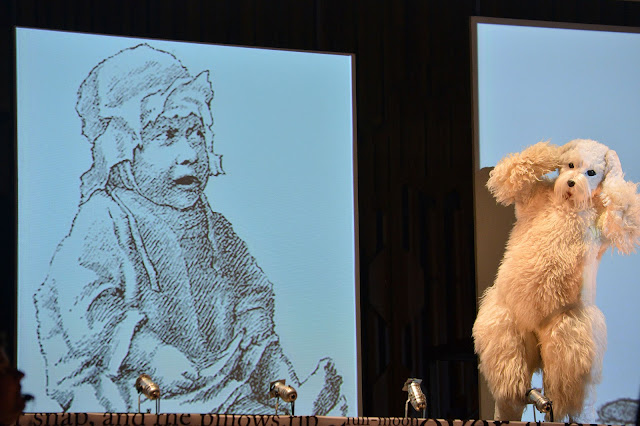 The closer you are to your Inner Child, the more you get from Oliver Knussen's Sendak operas, at the Barbican Theatre. Remember being a kid, wide-eyed with wonder listening to crazy stories? Maurice Sendak's stories are surreal: they defy logic. Yet their anarchic mayhem connects to something deep in the psyche. "NO EAT!" screams The Baby in Higgelty Piggelty Pop!, "NO EAT!!!!!". A bundle wrapped in lace asserts its dominance. Nurses who cannot cope get eaten by The Lion. Sendak appeals to kids because he subverts the power structure and releases primal feelings. A man playing a pig hands out ham (!) sandwiches to the real audiences. "Faith in Food" says Jennie the Dog, but faith in fundamental sustenance rather than something handed out free by a stranger.

Jennie the dog tries to make Baby eat an egg by telling a silly story, just as mothers have done since time immemorial. Baby's not fooled. Just as the Lion is about to swallow them, Jennie finds the courage to stand up for herself. "I want to be in the Mother Goose World Theatre!". It's the Magic Word she thought she didn't know. By confronting her own needs, Jennie is able to break the cycle of silly games. In Castle Yonder, Baby at last grows up, nurtured by emotional fibre, not vanilla pudding.

Although Where the Wild Things Are is by far the best known of Maurice Sendak's stories, and the selling point of the Barbican Knussen Double Bill at the Barbican, it's fairly straightforward, by Sendak and Knussen standards. A kid dresses up as a wolf , releasing his base instincts and gets into trouble. So he runs off to Where the Wild Things Are. The monsters grin and look benign but the kid knows that if he stays, they'll consume him. So home he goes and peace is restored (by the smell of warm food). Strangely enough, my own children were immune to the delights of this Sendak story, while most of their friends wewre transfixed.  I don't know why because they weree addicted to Sendak's In the Night Kitchen, where bakers making the morning bread tumble through the sky and  a child in an aeroplane made of dough saves the day. Maurice Sendak is upstaged in every way by Maurice Ravel's L'enfant et les sortilèges, a much darker and more sophisticated tale (read more about the Glyndebourne production HERE). Knussen's zany, cheerful music makes his opera fun but doesn't stimulate the deeper levels that are in Higgelty Piggelty Pop!.

Nonetheless, it's an entertaining experience, and would have been more so had Ryan Wigglesworth kicked more spirit into the Britten Sinfonia. At Aldeburgh, the playing was livelier, laced with manic dementedness, which added spark. (read more here)  At the Barbican they were rather Better Behaved which doesn't work quite so well with subversive music like this. Wigglesworth always looks impeccably immaculate, but he's much more fun when he roughs up. Nonetheless, the children in the evening performance listened avidly, wide-eyed, sitting forward, taking everything in with a sense of wonder. What a pity that a small number of adults behaved like philistines, yawning and sneering loudly. What were they trying to prove? That they were cleverer than kids? At least the kids haven't lost their instinct for magic.

On the other hand, there's a lot in Higgelty Piggelty Pop! that alert adults would get more than kids. The reference to the Mother Goose World Theatre is crucial, for it links to an undercurrent about theatre and illusion. Is opera a grand form of Mother Goose? We all need fantasies to sustain our prosaic lives. That's why we need music and opera or we'd shrivel up and die, emotionally, I think.  This is where  Knussen asserts himself above Sendak. He writes in wry references, like snatches of Mozart, baroque and even Barber Shop. In her despair, Jennie the Dog sings mock-operatic arias of exaggerated desperation. Then the tree sings back to her. It's an ash tree. Knussen sets its words with great portent. The World Ash Tree, like the Mother Goose World Theatre, Jennie the Dog and Sieglinde, both searching for the way out of their dilemmas.

Are the multiple mock endings a sly reference to the ending of Don Giovanni ? It's also a way of linking "reality" opera to the stylized cardboard theatre games children used to play with long ago. Could it also be typical Oliver Knussen with his fondness for repeats? But could it on the deepest level be like the way adults and children play together? Even small babies like peek-a-boo games where they think something's over and it pops up all over again. Even pre-verbal children instinctively like illusion and role playing. Parents put on funny voices, and make nonsense sounds, playing wth pitch and tempo. They say "Boo!" and the kid bursts out laughing. I imagined Knussen reading Sendak stories to his little daughter, the "Muse of Higgelty Piggelty Pop!" and making her squeal with delight. Children need fantasy if they are to grow up open minded and creative. As do we all.  Deprived of that child-like sense of wonder, we'd be like The Baby screaming "NO EAT!"