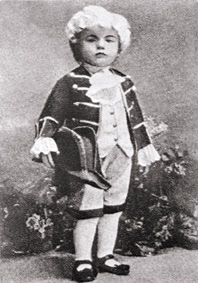 Tonight at the Royal Festival Hall, Vladimir Jurowski conducts the London Philharmonic Orchestra in a remarkable programme. (My review is HERE). It starts with the Overture to Beethoven's Fidelio. Then, Schoenberg Ode to Napoleon op 41 and A Survivor from Warsaw op 46 and Luigi Nono's Julius Fučík, which will segue straight into Beethoven's Symphony no 5 without a break. Beethoven 9 might be more obvious, but there are good reasons for this choice.

This should be an extremely stirring recital because all these pieces are intense - and political.  Composers write about human situations they care passionately about. Why shouldn't they write about human rights and the suppression thereof? Beethoven shows us  that there never was a time when music had to be soothingly retro. The Sarah Palin School of Music will have to wipe Beethoven off the map! Much respect due to Jurowski for programming this. It's an act of courage and principle.

The photo above shows Julius Fučík (1872-1916) uncle of Julius Fučík (1903-43) the composer who wrote spectacular military marches, including Entrance of the Gladiators, which is often heard at the start of circuses and sporting events. That's relevant because Fučík the younger sacrificed his life to oppose the Nazis.  Here he is a an infant dressed up in the sort of costume that went nicely with the pomp and circumstance that his uncle's music inhabited (though not only for belligerent reasons). He's inspired. He's even got a hat, like a miniature Napoleon. This little lad grew up to be Communist leader and was arrested by the Nazis. He was tried by by Judge Freisler who would  murder thousands of opponents to the regime, and hanged in the Plötzensee Prison in Berlin. In 1947, his widow gathered together his writings and messages from prison and published Notes From the Gallows. Further irony: the Communist Party used Fučík's words to legitimize their regime. Luigi Nono, also  a Communist, chose Fučík as a subject because he cared about what Fučík stood for.

Nono was also son-in-law of Arnold Schoenberg. It's important to remember Schoenberg, Nono and their peers especially now that the South Bank has finally launched its Alex Ross The Rest is Noise year. That's been so heavily promoted for so long that it's hard to believe it still hasn't started. The year will mean programming based around Ross's idea of what 20th century music should be, which is not the same thing as what 20th century music actually was. For a much more incisive approach,  read Paul Griffiths. There is no comparison. It's not the dumbing down that's a problem but the idea that  musical experience should be governed by commercial promotion of one source, not necessarily the best, and so heavily marketed that this one source obliterates all else.  Totalitarian revision of music history? The South Bank gets state funding, but it uses its status to serve commercial purposes? No-one will dare query the ethics because there's too much money at stake.  All the more reason we need programmes like the one Jurowski has planned for us tonight.
at November 28, 2012