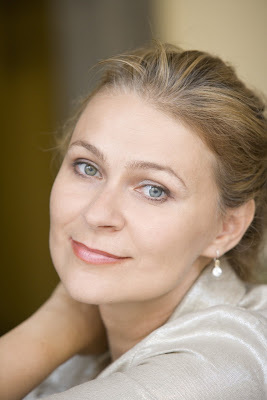 Everyone knows Carmen, or thinks that they do, which is not always the same thing.  Carmen smokes and sleeps with whom she wants, and cannot be constrained unless she wants to be. The Carmen archetype is so powerful that she's inspired countless reworkings, bringing out different aspects of the meme. Calixto Bieito's celebrated production of Bizet's Carmen, now at the ENO, is an excellent oportunity to reconnect with the fundamental human drama

Bieito is Spanish, and his Barcelona production was geared towards Spanish sensibilities. Catalunians think of themselves as distinct from Spain. The first flag we see is t la Rojigualda with the royal crest. Later we see the same colours with the image of a bull emblazoned. Obviously, Escamillo is a toreador. But the image goes far deeper. The silhouette bull we see is  the ubiquitous Osborne Bull that dots the Spanish landscape. To many it's a symbol of foreign economic domination: to Catalunians, it's a reminder that their region is controlled by Spain. Although Carmen the opera is associated with Spain, Carmen isn't Spanish but a gypsy. Her people obey no state, and observe no borders.

The first scene is set in a military camp. The soldiers look strong and virile, but they're brutalized into conformity. Recalcitrants are punished, even by death. Duncan Rock looks god-like as Morales, but we know he's just a corporal who could be sacrificed as fodder. He's like the bull who must kill or be killed.  The crowd secenes are well choreographed. In their uniforms, men and women move like parts of  a machine. Only the children remain wild and free. When Carmen becomes Escamillo's consort, she seems poised to join polite society, but then she's killed.

Ruxandra Donose is superlative as Carmen. Concepción in Ravel's L'heure espagnole is one of  her  signature roles, which she's done at the Royal Opera House and at the Barbican.  Her voice is rich, with a lustrous smoky quality, which adds depth and mystery.  This is especially important in Carmen who carries the whole opera. In Barcelona, Erwin Schrott, Roberto Alagna and Marina Poplavskaya were superlative, comensating for a relatively weak Carmen.  In London, most of the cast comes from the usual ENO milieu. Without Donose, the performance would have been much less satisfying.

Donose creates an intelligent Carmen who negotiates her way through difficult situations. The Habanera is her calling card, advertising her image as seductress, but sexuality is a means to an end.  Perhaps Carmen wants love, but she's too realistic to expect miracles. When the smugglers bring out flamenco dresses from their loot, all three women think it's degrading. These are just cheap  costumes. What they really want is to move ahead, but they haven't the means. Donose's Carmen has a natural elegance which suggests that higher aspirations may be within her reach. Her singing is sensual but never vulgar. She's blonde, but her voice creates the "dark eyes" in the text, coloured by emotional depth.

Don José scatters the contents of Carmen's nice new handbag to demean her. Donose crawls on the ground, desperately trying to pick up the fragments. Her voice becomes almost fragile, yet she doesn't capitulate. This subtle portrayal develops Carmen as a sympathetic human being, far deeper than the slattern society assumes she must be. Donose's Carmen is genuinely truly tragic because she is no caricature, but a good woman crushed just when she might be reaching her dreams.

Bieito's staging suggests the open countryside where a "child of liberty" might roam free. Lilas Pastia (Dean Street) and the smugglers meet in the open air, just as people do in hot countries like Spain.  When Escamillo (Leigh Melrose) and Don José (Adam Diegel) fight they jump on old cars as if they were mountain rocks. In the Barcelona original, Bieito drew parallels with the way tourism despoiled the Spanish countryside and national culture. For London, that had to be moderated for obvious reasons, so all we got this time was a woman in a bikini and other tourists singing about Butlins (not Benidorm as far as I recall). The perils of opera in English!

More effectively, Bieito builds his staging on an acute understanding of Bizet's music. We see Escamillo as toreador only briefly. It's his job, not his normal world. The toreador songs are heard from a distance for the same reason: they are colourful illusion, not reality. Carmen is completely alone when she confronts José. They face each other in a circle on what looks like clay. In this corrida, they are the real Bull and Bullfighter.

Ryan Wigglesworth conducted the ENO Orchestra. He is an elegant conductor whose clarity works well in modern music. In Bizet, he could do with a bit more low down and dirty, for the story is horrible, and the charms of the music need context to give them bite. Elizabeth Llewellyn has a big following who greeted her long aria with deserved applause. Beautiful singing, but not the grittiness of Poplavskaya's Micaëla. But then she doesn't get paid as much. Madeleine Shaw (Mercédès) and Rhian Lois (Frasquita) were vividly defined, though the part of the young daughter, so well developed in Barcelona, had less impact. Graeme Danby sang Zuniga. José lies rather too high for Adam Diegel though he lasted the long role well. While Donose's Romanian accent gave her Carmen an exotic edge, Diegel's American accent was disconcerting. Leigh Melrose's Escamillo didn't cut quite as much of a dash as some Escamillos do, even when their singing isn't as steady. Very few could  manage the sheer animal magnetism of Erwin Schrott in the role in Barcelona. But while the ENO sticks to its policy of English language productions, few singers will take the trouble to relearn their parts in the vernacular.
photo : Ruxandra Donose, credit Nikolaus Karlinksy
at November 22, 2012