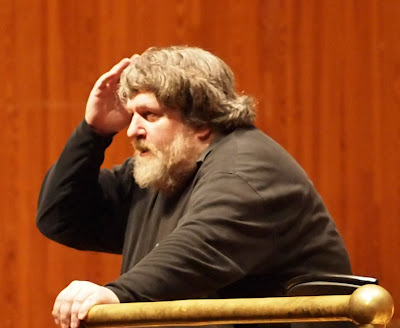 Ollie is 60! The Barbican and the BBC SO celebrated Oliver Knussen with a retrospective of some of his greatest hits. He came on stage wearing a smart new conducting tunic and what looked like one of those shiny badges you get on birthday cards that say your age. Maybe my eyes were mistaken, but it seemed a typically Ollie touch.

More typical Ollie programming wit. Maybe it was birthday fun, maybe it's Bonfire Night, but the revised programme started with Flourish with Fireworks op 22 (1988/1993),  a joyous 4 minute blast of musical high spirits, perfect for the occasion. References embedded to Stravinsky's Fireworks and to the LSO (A,m E flat, G) and to old friend Michael Tilson Thomas (E, B, B).The even earlier Choral (op 8, 1970-72) dispenses with high strings altogether. Four double basses march against counter processions of trumpets, horns and mournful trombones. Flutes and percussion cry out against the dirge. Eventually the different parts of the orchestra coalesce, not in unison, but in chorale.

In Walt Whitman's verse, dense thickets of phrase and sub-phrase pile upon each other. Parsing this grammar must be like breaking code. For Knussen, that's a challenge. Lines of text like "reck'd or un-reck'd, duly with love" aren't easy to analyse, but Knussen's music makes you feel the meaning. In the Whitman Settings op 25a (1991) density is written into the orchestration, while the high soprano line floats clear above. "I am the Poet of Earth, and the voice of the rain", sang Claire Booth, another Knussen muse.

Martin Owen was the soloist in Knussen's Horn Concerto op 28 (1994/5) . It's almost more horn than concerto, for the horn part dominates, sensually teasing and provoking the orchestra. It's inherent drama makes it one of Knussen's signature pieces. I heard Owen play in one of the first performances of Elliott Carter's Horn Concerto (2006), where the soloist dialogues with different segments of the orchestra in succession. I would have completed this review on Monday after the performance, but news came of Carter's death. It was hard to think of anything else.
Two Organa (1994) is only six minutes in total, but densely constructeed. The first part (Notre Dame aux Jouets) uses only white notes of the diatonic scale. The second adds a secret puzzle: dedicated to the Schoenberg Ensemble, it spells Schoenberg's name in pitches, concealed in dizzying polyphonic fireworks over a deeper pulse of plainchant.

By now it should be obvious that, though it was Knussen's birthday, and dozens of composers and musicans were in the audience, the presence of many others unseen was intensely palpable.  Knussen spoke about Hans Werner Henze who died the previous weekend.  Henze had a home in London for decades and was closely involved with British music, as an influence, a mentor, and as Knussen put it, "a good friend". Then Knussen conducted his Requiem : Songs for Sue op 33 (2005-6). There are Henze connections, but above all, the piece is a tribute to Knussen's late wife, Sue.  Knussen didn't need to explain. Most of the audience know the piece extremely well.

The opening line, “Is it true, dear Sue” is followed by silence, as if an answer were expected, but we know it will never come. It’s poignant without being maudlin.  The piece opens in shrill staccato, expressing tension, but the orchestration flows tenderly, in circular figures towards a kind of calm stasis. The rounded figures felt like abstract depictions of an embrace. This image reflects too in the intimate instrument doublings. This isn't so much a group of separate songs as a curving arc of sound and feeling. Silences, here too, are part of the structure, like white spaces in a watercolour, extending the music into the imagination. As a meditation on someone loved who has passed beyond the physical, these voids are not empty, but charged with memory.

Indeed, there is an almost Ligeti-like stillness in the orchestration, the unadorned vocal line subtly enhanced by hollow, metallic and otherworldly sounds which express a sense of desolation. The poem, by Emily Dickinson, is full of corny lines like “as quiet as the Dew – she dropt as softly as a star”, but Knussen shapes the vocal line with dignity. Surprisingly, there is some emotional distance in this piece which I can’t quite pinpoint either, but which adds a moving elegance to the whole, layering it with a veil of Sehnsucht which makes it universal as well as first-person.

Knussen's Requiem - Songs for Sue fascinates me because it creates a very profound sense of duality.  So many human relationships are built on control or power games, or social convention.  Genuine love, I think, transcends all that. It's based on respect for the individuality of each person, regardless of their relationship to oneself.  If we truly love, we can let other people be themselves.
It's no coincidence that most composers are men, who are often unable to articulate complex feelings in words or actions. Hence composers speak through music.  So many need to hide themselves behind elaborate structures, as if florid expression equated with feeling. Maybe that is the case for some, but I've always had a suspicion of insincere Requiems.

Perhaps the core of  Songs for Sue is the exquisite W H Auden setting, "Time will say nothing but I told you so". "Time only knows the price we have to pay. If I could tell you  I would let you know". Again this sense of dstance, and of feelings too deep to articulate. The phrase "I told you so" repeats many times. Is it reproach? Is it regret?  Sometimes the speaker is Time, sometimes the overwhelmed lover.

The absolute heart of the song pops out, almost unnoticed. Booth lowers the timbre of her voice, creating a direct sense of intimacy. The line “”because I love you” is spoken, not sung. A musician can’t “say” without music, so perhaps this is Knussen the man speaking through the medium of soprano. It's an unbelievably intense moment, but so hidden  that it's easily overlooked.

After this point I cracked up emotionally. This is why Knussen is good.  He doesn't need grand gestures or over-stuffed show pieces  He writes intricately constructed miniatures, but with a distinctive personal voice.  He seems playful but behind the whimsy there's deep feeling.  Songs for Sue prove that there's greater art in supposedly small pieces than in over-inflated  big pieces designed for public display but without real vision.  Is Sibelius Symphony no 7 minor because it lasts only 15 minutes? Size certainly isn't everything.

Knussen's Symphony no 3 (see my review of the NMC reissue here) doesn't sprawl. It's concise. It's another of Knussen's Greatest Hits, but I was still shaking after Songs for Sue and couldn't concentrate.