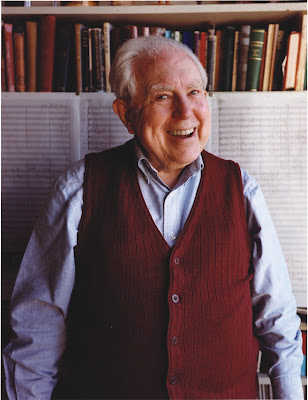 So much about Elliott Carter defies stereotypes. Although he was born into a wealthy New York family Carter was thoroughly cosmopolitan. He spoke French like a native, travelling back and forth between Europe and the US. Growing up in the 1920's and 30's, he wholeheartedly embraced the cultural innovations of his time. He personally knew Stravinsky, Bartók, Charles Ives, Edgard Varèse and many others. He attended classes with Nadia Boulanger but she had fixed views on what composers should do, and Carter didn't. His first major compositions didn't happen until he moved out - literally - into the desert to find his own voice.

He was still writing until this year, redefining what he called his "Late, late style".  He used to joke that he only wrote miniatures after the age of 100 "because I might not have time to finish". Some people don't find themselves creatively til late, and some never find themselves at all, but Carter kept developing and refreshing himself.

At Aldeburgh, even the non-musical townsfolk talked about the 100-year-old composer, still playing the piano and taking animatedly with Pierre-Laurent Aimard about works in progress.  That vivacious personality, that chirpy voice! When he was a mere 97, he attended a Barbican Total Immersion, partying up to 2 am with the orchestra, then starting rehearsals the next morning at 10, then flying off to Paris. A dear friend gave me an introduction and gave me a tip: "Don't go up to him, too many admirers around. But go to Virgil and say that I sent you." Sure enough, Carter was surrounded by the head of the BBC and many other household names. Virgil said "X wants you to meet ....". Immediately Carter bursts into a huge grin, and shoves the VIPS aside. I was a complete stranger but his friend meant so much to him that he welcomed me as a friend too, hugging me and giving me a kiss. That was the kind of man he was, totally open and sincere.

Carter couldn't make the 2010 festival at Aldeburgh where one of his premieres was performed. I was sitting behind Virgil and Oliver Knussen. "Do you think they'll let me take a photo for Elliot?" asks Virgil. "I'll GET them if they stop you," says Ollie.  Carter and his wife Helen lived in the same New York brownstone for many decades as the neighbourhood changed around them. A friend used to see them out for walks, but respected their privacy too much to interrupt. They were inseperable.  Once someone phoned up and demanded to speak to Elliott. Helen relayed the message. "He's busy just now." "Don't you know how important I am!" raged the caller. Well, yes, actually, that's why Carter wasn't impressed. Everyone has fond memories of the Carters. who doted on other people's families and were always generous with their time.

Elliott Carter was born a day after Olivier Messiaen. Two immense pillars of western music whose influence reached far beyond what they did on their own. In so many ways it seems that the world is entering a  selfish retrograde cycle, much of what we've learned the hard way through the 20th century erased. It's like the Taliban wrecking ancient monuments. All the more we need to honour Elliott Carter for his music and for his eclectic, open-minded joy of living.