Richard Strauss Der Rosenkavalier opened Glyndebourne's 80th anniversary season, dedicated to the memory of George Christie, who created country house opera as we know it today. "My father loved Der Rosenkavalier", said Gus Christie."I think he would have liked this production", he added with a wink, "Though he would, as always, have had a lot to say about it". He's right. The more we care about an opera, the more we get from fresh perspectives. This 2014 Glyndebourne Rosenkavalier is provocative because it focuses on Baron Ochs and what he stands for. Richard Strauss polishes surfaces so glossy that we're dazzled, blinded to the sinister depths that lurk within. But think of meaning. The Marschallin lives in luxury, but she's not fooled. Like Sophie, she herself was traded in marriage like a consumer product. Baron Ochs symbolizes a system that places more value in crass commerce than on human values.

The Marschallin, Kate Royal, appears in a nude suit, rising from her bath like Venus. It's audacious, but absolutely to the point. She's flaunting her wares. Her bedroom is invaded by merchants, each flogging some product. One is an Italian Singer (Andrej Dunaev). His song is sweet but banal. Strauss is sending up art calculated to please the marketplace. Baron Ochs (Lars Woldt) is right in. He's come to buy a bride, but he'll grope any woman available, even if the "woman" is a man.. Only when the Marschallin is alone can she be herself. As Kate Royal sings her last lines at the end of the First Act, the yellow and grey designer wrapping paper decor is transformed by light into silver and gold.

Octavian (Tara Erraught) presents the silver rose to Sophie (Teodora Gheorghiu).but the ritual goes wrong. They fall in love. The audience howled with laughter when the lovers locked foreheads and rocked together in unison, but the naivety contrasts well with the devious machinations going all round them.  Humour is a key into Richard Strauss. This Richard Jones production is lively but it contributes greatly to this Richard Strauss anniversary year because it shows how Strauss uses wit as a weapon against mindless conformity. Der Rosenkavalier isn't superficial,  it's satire. There's glamour, and romance, but it has a core of solid silver. 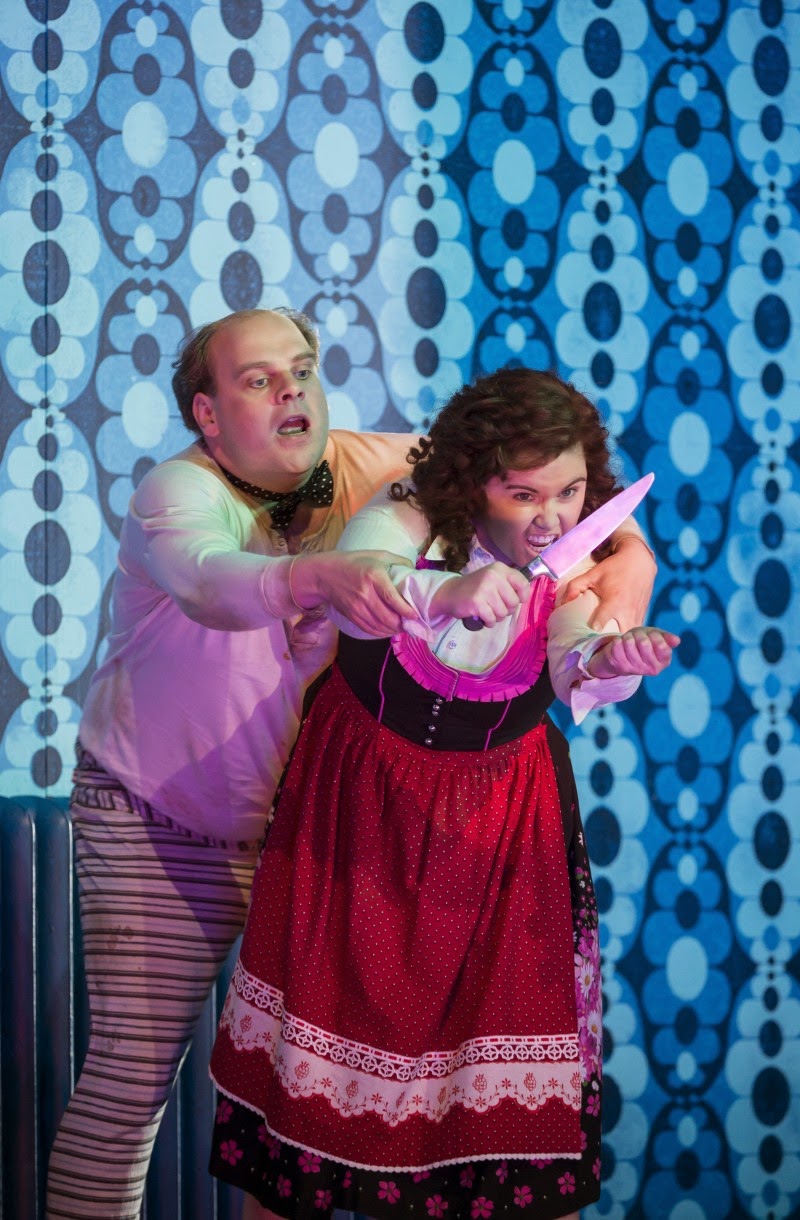 If there's a moral in Der Rosenkavalier, it might be "Things don't have to be the way we think they should be".  The Marschallin gives up her dream of love so Octavian and Sophie can have a future. She concocts a plot to expose Ochs for what he is: ox by name and nature. Ochs is lured to an inn so garish that anyone with real taste would be screaming to escape from it. Ochs's favourite song "Ohne mich" is a tune anyone can hum, but that doesn't make it good music. He's also easily fooled by fake peasant costumes. Och's knows what he likes, but that's the problem. He doesn't take any one else into consideration.  Lars Woldt's performance is outstanding, one of the sharpest Ochs I can remember offhand.  He's not a comic parody but all too believable. This type inhabits all walks of life, including the opera world. Woldt defines each word with precision, observing the changes in pitch with clear deliberation. Woldt acts well too, moving with animal agility. Ochs is not a buffoon but a man who gets his way by selfishness and cunning. That's why he's so dangerous. He knows how to use the system against those less ruthless.There aren't enough Marschallins around.

The words "Papa! Papa!" ring with shriill accusation. When Ochs is trapped, the stage fills with those whom he's harmed or could harm if he could. Strauss operas are often "busy" with numerous characters whose moment may not last long but who are integral to the plot. In this production, even non-verbal parts like Ochs's eldest son and the black servant are given "voices" that define their role perceptively. Ochs's son can never inherit, and the black servant can't dream of winning the Marschallin, but they deserve dignity, too.  Big on stage ensembles pose problems in  any staging. Here, Jones and his Movement Director Sarah Favie choreograph the interactions between those on stage and the sounds from the pit  with such detail that it feels that the score is literally coming to life.  Robin Ticciati's first performance in his new role was somewhat tentative in places, but in the last act everything came together, and the music shone in glorious savagery.

Given the many  Der Rosenkavalier productions of the past that have shaped our memories, performances are good all round. Kate Royal, a perennial house favourite, won great applause. She's so beautiful she seems almost too idealized for the part, but I liked the wry grit with which she sang her final benediction to Octavian and Sophie.Tara Erraught's Octavian was robustly acted with earthy glee. HERE IS MY MORE DETAILED TAKE ON ERRAUGHT'S INTELLIGENT OCTAVIAN. Jones developed Sophie with more personality than the part often receives, so Teodora Gheorghiu could sing it with charm.  Glyndebourne's budget doesn't run to megastars so lesser roles are often extremely well cast.  Michael Krauss's Faninal was extremely well presented - nice, firm singing and poise. Christopher Gillett and Helene Schneiderman sang Valzacchi and Annina with great character. Robert Wörle and Scott Conner sang The Innkeeper and the Police Commissioner. Even smaller parts were thought through carefully and presented with conviction. Richard Jones's style (with designs by Paul Steinberg and Nicky Gillibrand) isn't usually my taste, but his is a production filled with well thought out detail and definition. Ochs might not like it, but I and most of the Glyndebourne audience got it.

PS  In some scenes, Ochs is wearing typical traditional clothing worn in the countryside, even for the upper classes. It's not specific to Bavaria. It just shows he's provincial. Lerchenau is in the sticks - "Lerch" as in Lark. In modern parlance, he's a twit from Lark Rise!
at May 18, 2014