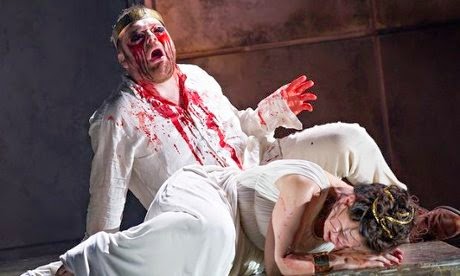 The English National Opera's Julian Anderson Thebans at the Coliseum, London, absolutely justifies the ENO's mission: opera, in English, and of national significance. Anderson is one of the most influential figures in modern British music. He's always written with a distinctively "visual" personality, translating concrete images into abstract music (Read my article Julian Anderson - visual composer.  Thebans may be his first official foray into formal opera, but he's been heading towards it for years.

"Is this a contemporary opera?" asked someone in the audience. A good comment, since "isms" are irrelevant to art.  Greek tragedy is universal because it deals with concepts that transcend time and place. Its very power comes from abstraction.  Frank McGuinness's text distils the essence of the drama in a spartan (oops) way Anderson can tell the story through his music. Orchestrally, Thebans is so vivid that  I closed my eyes during the First Act to better absorb how the drama was being told by  the orchestra, and the interplay between orchestra and voices. Massive towers of sound suggest the relentless Fate that will destroy Oedipus and his issue. Pierre Audi's staging, with Tom Pye's designs,  reflects the music extremely well.  Strong horizontals against towering verticals giving form to the structure in the score. The choruses are very well blocked, their movements reflecting the movement, and the tension in the music. Towers filled with rock loom over the stage: Antigone, Oedipus's daughter, will be entombed alive in an insane, sterile parody of the womb of the Earth.

Edward Gardner conducts with savage but tightly controlled ferocity. Gardner chose Anderson's Symphony for his high-profile Barbican concert nearly ten years ago, tellingly combined with Walton's Symphony no 1.  He understands Anderson, and his place in British music. Gardner shows how Anderson's textures are created.  Gardner is wise to expand his portfolio and seek further challenges in orchestral repertoire. He could perhaps be the "British" conductor of choice, with a new, distictive approach.

The powerful blocks of sound that create such impact are not crude monoliths  but built up in  carefully delineated levels of density. Anderson knew Gérard Grisey and Tristan Murail. He knows how microtones operate. I also thought of Harrison Birtwistle, specifically  Earth Dances, where tectonic planes of sound are shaped by layers of smaller fragments.  Birtwistle's syyle is strikingly organic, as if it grows naturally from great depths. Audi's staging again reflects this musical concept. In the Second Act, The Future, lights shine through the towers of rock, highlighting the invisible gaps behind solid objects (probably styrofoam). The lights suggest fire, perhaps volcanic forces rising from the bowels of the planet. Antigone defies oppression. She is the "light" that leads Oedipus who has gouged out his eyes.

The Second Act, which tells her story, is exceptionally well written, worthy of being staged on its own as a stand-alone. A second interval after a 20 minute act would normally kill an opera, but in this case feels necessary: you need to escape the intensity. The writing for the choruses is also very good indeed. Anderson sings in choirs himself. Like Greek choruses, Anderson's chorus pronounce judgement. From way up at the top of the auditorium, the choruses explode, augmented either in numbers or electronically: the effect is overwhelming, yet the voice types are not muddled.

In this powerful Second Act, music and visuals glow black, white, indigo, red and gold. This intensifies the desolation at Colonus, the portal of Death. The music becomes sepulchral. At times I caught echoes of plainchant. The devastaion is all the more harrowing because we have just seen how the curse on Oedipus outlasts his death.

Roland Wood sang Oedipus. He has been unwell for some weeks, so we didn't hear him at full capacity, so all the more respect to him. I hope he doesn't harm his voice by pushing it for this premiere, important as it is. Julia Sporsén sang Antigone. Lyrical beauty doesn't necessarily come into this role, so Sporsén created the strength in the part well. Peter Hoare's Creon was superb, helped by the oddly sensual passages Anderson writes for the part. Creon's monolgue in Act Two is disturbingly enticing. Anderson also uses countertenor for good effect, so Christopher Ainslie singing connected to baroque style while also suggesting the surreal intervention of Theseus.  The whole Oedipal saga  circulates around Jocasta, though she's swiftly despatched fairly early on.  Anderson gives Susan Bickley a good aria, and Audi's costume designer Christof Hetzer further illuminates the past by dressing her - alone - in royal blue.
at May 04, 2014