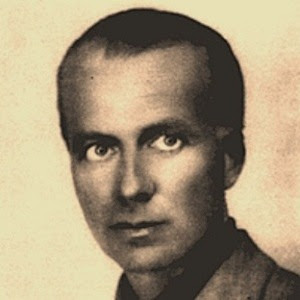 If Hölderlin had written music might he have written like Giacinto Scelsi (1905-88)?   Scelsi's music  and Hölderlin's poetry have a similar moonstruck quality. Both were artists for whom the term "from another planet" could have been devised. Scelsi's music is fragmentary and eclectic, but fascinates me because it opens out strange vistas one might not otherwise access, just as Alice in Wonderland follows a rabbit into a hole in a tree and discovers bizarre, alternative reality.

Scelsi, the great grandfather of microtonality, was born  into the Italian aristocracy. A cosmopolitan sophisticate, he hung out with Cocteau in Paris, and was received as an honoured guest at Buckingham Palace. Yet when he died died only 25 years ago, he was something of a mystery, a recluse who had spent most of his life in secure institutions. His music is as strange as his life was: bizarre, obsessive, and elusive. Assuming, of course that it was his music, since there are claims that it wasn't. Perhaps Scelsi is as kin to Ferdinand Pessoa as he is to Hölderlin?  Pessoa used many identities that corresponded with each other –  a precursor of the modern internet troll, though he was genuinely creative rather than destructive as trolls are.

At last a new book, in English, Music as Dream: Essays on Giacinto Scelsi. edited by Franco Sciannameo & Alessandra Carlotta Pellegrini. Please read the review here in Soundproof Room, one of the finest blogs on new music, for a detailed summary. Please also read this article the late Peter Graham Woolfe wrote in 1986, when Scelsi was still alive - very perceptive. More on Scelsi, Xenakis, Murail etc on this site, too, please explore.,