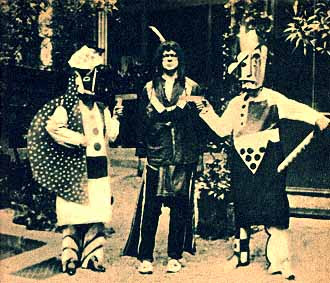 Tirésias comes from Zanzibar, not Zanzibar off the coast of Africa but a Zanzibar of the imagination, somewhere in the French Riviera, bright and breezy as a painting by Matisse.  But Apollinaire was writing under the shadow of the First World War and Poulenc during the German Occupation of France.The satire isn't mindless.

Thérèse (Hélène Guilmette) is a tame married woman who suddenly decides to become a man. Her breasts turn into balloons, so up she floats and away. Red, white and blue, the colours of the tricolor, but patriotism this isn't. Everything's upside down.  Frenchwomen in the First and Second World War were urged to produce babies as some kind of National Service. Replacing cannon fodder perhaps? So when Thérèse says no and becomes General Tirésias and leads an Army, cheered by women, the poliiical undercurrent is pretty explicit.  Thérèse's husband (Jean-François Lapointe) cross-dresses and is groped by the kind of men who think that;'s what women are for. He hits on a plan to produce 40,000 babies. When the chous sings "Papa"  their voices are sharp, suggesting the crowing of a cock - another image of French Nationalism. and male chauvanism to boot.  "Silence!" sings the husband, but the chorus will not be suppressed. Oh well, says the husband, the kids can make careers in the arts - and in journalism, the art of manipulating words. Of course, the kids pop up fully formed, overnight. It's that easy! Poulenc even writes into Tirésias.s part a long vocalize that sounds vaguely Moorish - perhaps a reference to French imperial rule. Needless to say, the Establishment didn't like it at its premiere. Anti-militarist, and non-breeding Benjamin Britten did, and wrote an adaptation.

Very bright, zappy performances by Guilmette, Lapointe and a cast who understood why diction has to be sharp and tempi fast.  Ludovic Morlot livened up the BBC SO and the BBC Singers: they don't often get this intoxicating fare. The photo above comes from a 1917 performance of Apollinaire's play, showing the Cubist influence.

Before Poulenc, Fauré's Requiem, produced with great sweetness. Nice performance, but, knowing what was to come next, I couldn't quite take it at face value.
at May 25, 2014