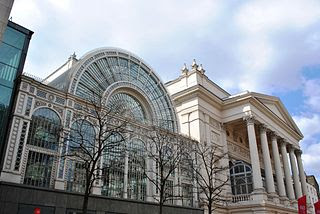 Expenditure on performance, education and outreach remains at 62%. Spending on high quality performers, conductors, directors, chorus and support  means high quality product, which brings in sales. You don't get 95% attendance by accident. Net surplus was 0%, down from 1.4% previously, after 14 years of balances and surpluses.

With 95% attendance figures in the main house, growth potential comes from audiences outside London. Cinema broadcasts reached 215,000 people in the UK, and 131,000 in 40 other countries  Biggest hits were The Nutcracker (55,000 attendees in UK) and Tosca (28,000 on BP Big Screens). This refutes Sir John Tooley's claim that cinema broadcasts drain audiences away from live performance.  Broadcasts are now the way to reach people who can't come to London, but that doesn't mean they won't "ever" dream of coming, and many who go to live perfortmances go to the broadcasts as well   Even greater potential lies online. This week the Royal Opera House broadcast the current La Traviata live online via the website and via its own Youtube channel.The audience reach is unlimited, given that some operas on Youtube reach million figures. Although filming is expensive and high risk, distribution costs are lower. HD Broadcasts  won't really necessarily harm DVD sales if DVDs are used for ultra premium casts.

The ROH also gives figures for "Excellence" ie awards, critical acclaim) and three heads for "Education", "Reach" and "Nurture" which all involve ways of growing the audience and connecting with the wider community.  More details HERE.
photo: Elissa Rolle
at May 22, 2014