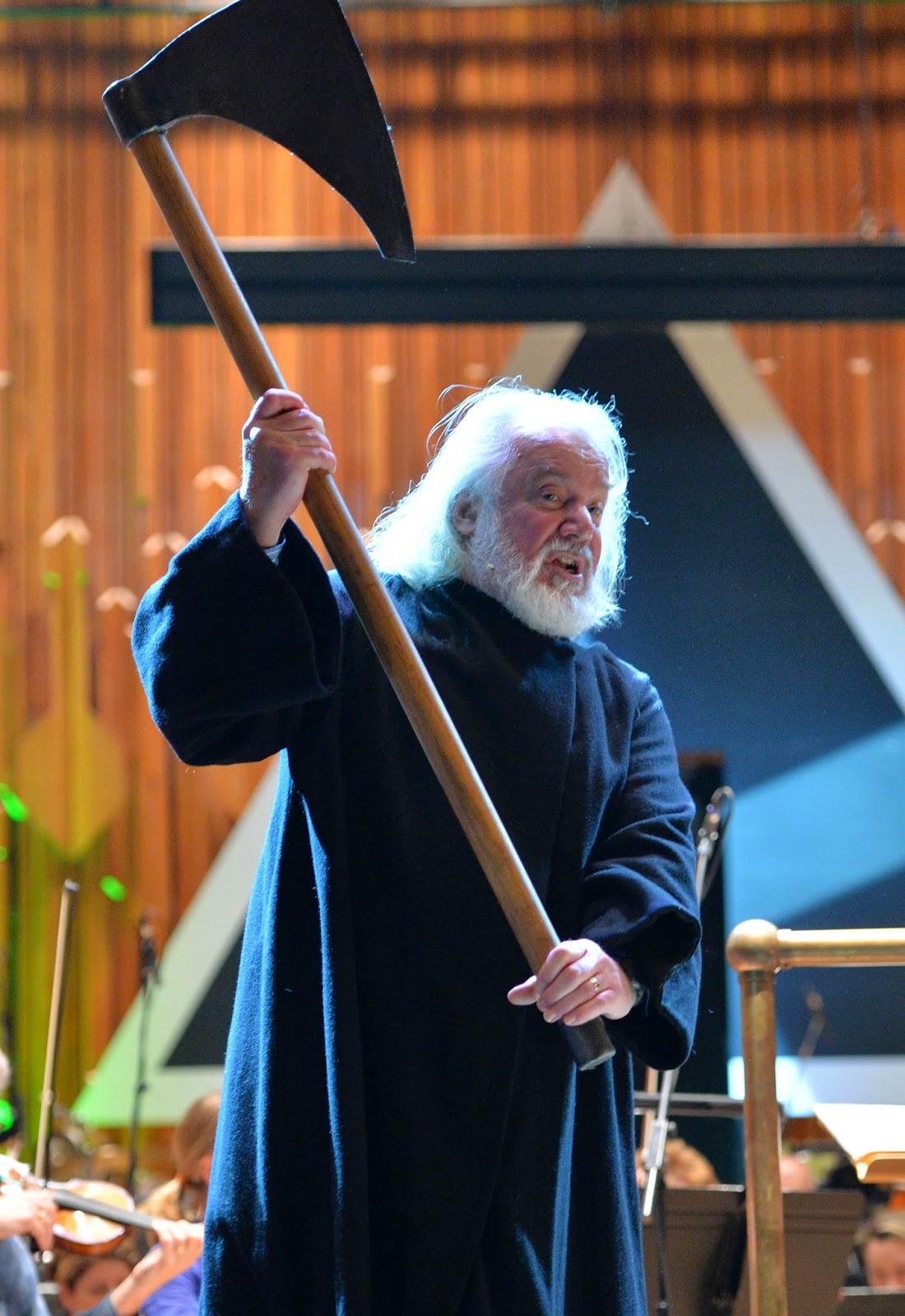 John Tomlinson stole the show in Harrison Birtwistle's Gawain, at the Barbican, London. In  the Salzburg production last year, he wore a green slime costume (pictured at right) but this semi staging might have been even more impressive. We could see Tomlinson's every expression, and  relate to him not only as the Green Knight but as an  artist and human being.  His voice roared, growling with menace and portent: yet when he raised his eyebrows and opened his eyes wide, one could glimpse a strangely refined sensibility. "Who is it", this Green Knight, and how did he come to be? What are the more esoteric connections between the Green Knight and Gawain? Who is Sir Bertilak? Does he belong to Arthur's Court (since his wife hangs out there) or is he supernatural? How does he connect to the Green Knight, his next door neighbour in the forest?  And where is Gawain heading when he takes the First Step on his next journey?  All provocative questions, which can't be answered but must be asked - a choice that's "no choice". Everything connects, as in a tightly wrought  puzzle,  Tomlinson's insights into Birtwistle's world are unique: we're fortunate that the music will suit his voice long after he retires from other parts. Tomlinson's Green Knight is even more commanding now than it was 20 years ago. Those tricky long passages up and down the scale are difficult to sing, but are now enhanced by an overlay of Weltschmerz, that's quite endearing.

Like most people,  I learned Gawain from the old Elgar Howarth/Royal Opera House Orchestra recording from 1994, just re-issued by NMC Records (review here). Howarth is good - he premiered many Birtwistle operas , but Martyn Brabbins with the BBC SO are  even better. The complex layers and textures in Birtwistle's music shone, details illuminated to show their place in the whole, The  pace was electrifying, pulling inexorably forward, despite the murmurs of overwhelming doom. This conflict between opposing forces  reflects Bitwistles idiom - circular forms, ritualized processsions and progressions from which there's no escape. Gawain is hypnotized. Orchestra and voices are closely integrated. Morgan le Fay's lullaby is picked up first by the harp, its strings held tightly so when plucked it sounds like a manic lute, such as Orpheus might have strummed.  Brass and strings scream with clarity so intense that they might be expressing what the singers dare not articulate. The Turning of the Seasons has a stylized rhythm, like the rhythm of time, but Brabbins and the BBCSO  make it grandly processional. Hidden from view the BBC Singers sang the choruses, the sound beamed round the auditorium by Sounds Intemedia: a wonderfully theatrical effect,. Later, as Gawain returns tom the "real" world a quartet of flutes herald, a parody of trumpets, but also perhaps a reference to the Spring that is to come. Ingo Metzmacher conducted in Salzburg, Brabbins and Metzmacher are both specialists in contemporary music, so they can create Birtwistle's audacious blend of violence and - dare I say it - Romantic intrigue.

Leigh Melrose sang Gawain. Much as I love Francois le Roux, Melrose is  far more persuasive. Gawain starts out naive, so a bright, light timbre works fine for a while. On his journey to the Green Chapel, Gawain matures. Melrose's voice becomes more assertive. Indeed, he reveals Gawain as a younger version of the Green Knight himself. It isn't just that their music connects, but Melrose intuits the steel in Gawain's personality. He does't need religious incantations or magic armour. He's begun to find himself, while for Arthur and his Court, nothing has changed. "How will I live in this tyranny of virtue" sang Melrose with such resolve that you sense what he means by "I am the sudden guest, unwanted, raw, as winter weather, bringing news no-one wants to hear". Melrose isn't a bass so he can't sing The Green Knight, a tour de forces of the lower register, but he makes Gawain feel like a hero in that mould. (the photo shows Christopher Maltman in Salzburg).

Laura Aikin's Morgan Le Fay was more complex and subtle than Marie Angel for Howarth in 1994. There's a point to the shrillness Angel produced, as Morgan le Fay is dangerous. But she's not evil. Aikin brings out the sensuality in the part, suggesting that Morgan le Fay is an Earth spirit, a female version of the Green Knight.  Her lullaby was sweet and perverse, but sincere - how hard it must be to sing those ululations!  Perhaps Bishop Baldwin, chanting in Latin is a lesser, earth-bound copy, lulling peoiple to sleep with words they can't understand. William Towers, greatly underrated, sang the Bishop  far better than one would expect, given the limitations of the part. He's a counter tenor with a delicuously masculine bite to his voice, suggesting demons hidden behind angelic sounds.

Jennifer Johnston sang Lady de Hautdesert, as she did in Salzburg. Her rich mezzo colours the part so it feels both comfortinga nd seductive - all the more reason to respect Gawain for not giving in! Good balance between her voice and Aikin's. In their dialogues, their voices entwined, suggesting the dense undergrowth of a forest, where vines overlap each other, forming an impenetrable thicket. I closed my eyes better to listen to the way their voices overlapped. Did I see their eyes smile? I wasn't sleeping, just trapped in the wonders of their music.

John Lloyd Davies's semi staging was dramatic and to the point. No need for too much literalism. Gawain is myth, not history. The people sitting near John  Tomlinson when he went "hunting" as Bertilak must have had fun as he leaned off the stage, wielding his axe at them.

Lots more on this site about Birtwistle - more than anywhere else . Please explore.
at May 17, 2014

This was my first Birtwistle and a thoroughly enjoyable experience it was too! I loved Jeffrey Lloyd Roberts' egoistic, bored almost anti-hero Arthur, lost in his own self important stasis. Leigh Melrose grew and grew as the evening progresed though I found Laura Aiken often shrill and overbearing though she had great presence. The supporting video gallery was also very effective, opening out a minimalist setting. All in all, a four hour journey there was more than justified.

Hello, just found your blog…
have you seen my photos of Birtwistle in Salzburg?
http://marionkalter.blogspot.fr/2013/08/sir-harrison-birtwistle-at-rehearsal.html
I am about to prepare an exhibition around Pierre Boulez on his 90th…. I have photographed him for more than 30 years.
best,
marion kalter
info@marionkalter.com