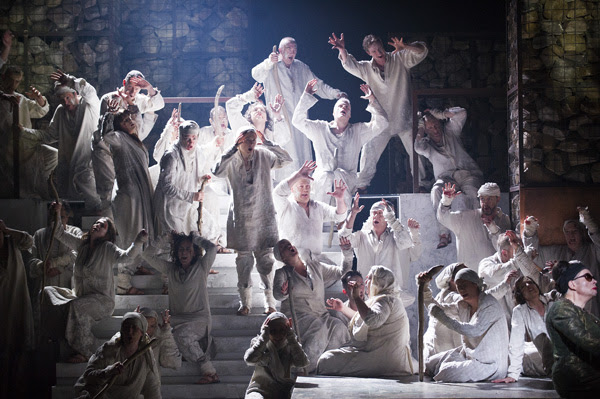 Julian Anderson Thebans, from the ENO, can be heard on BBC Radio 3 HERE. Anderson is  adventurous, but by no means difficult. His work is approachable and very "visual" so it was inevitable that he'd get around to writing opera,. I chose the photo above (c Tristam Kenton) because it gives an idea of the layers and colours in the music and the way the textures interweave. Pierre Audi is a director who knows how music operates. Anderson's background lies in the English choral tradition, which shows in the choruses and the vocal writing. We need composers like this.  Thebans is good music, good theatre and a breakthrough by a major British composer

The whole point of Greek tragedy is that it's stylized and undecorated. Effusive wordiness would be pointless: the characters are timeless avatars. Frank McGuiness's text is minimal, so it doesn't overwhelm the beauty of Anderson's music.  Sophocles's plays were not written to be staged together, although they all deal with the same subject. So the fact that Anderson places "the present" last after past and future is perfectly reasonable. The stories are so well known that they should be general knowledge - no special training in Greek needed. No-one would expect any composer to set them word for word.

When Oedipus dies, we know that the curse continues til it wipes out his children. Anderson knows his Greek classics better than his critics do. Audi is one of the great stage directors of outr time. Here the stage action follows the music extremely well, visually and in the movements of the singers.The chorus sings from the upper gallery, powerfully dramatic. You wouldn't want to be sitting up there, but that's OK, the opera would work well either in a smaller house or ne much larger.

The second act is so good that it could be done on its own. I'd certainly recommend this. Don't be put off by the subject - it's been reworked for 2,000-plus years. What a shame it is that when an interesting British opera by a British composer comes along it's met with determined incomprehension. The usual crowd of booers who attack anything the ENO does on principle are fools. PLEASE SEE MY REVIEW HERE.
at May 26, 2014