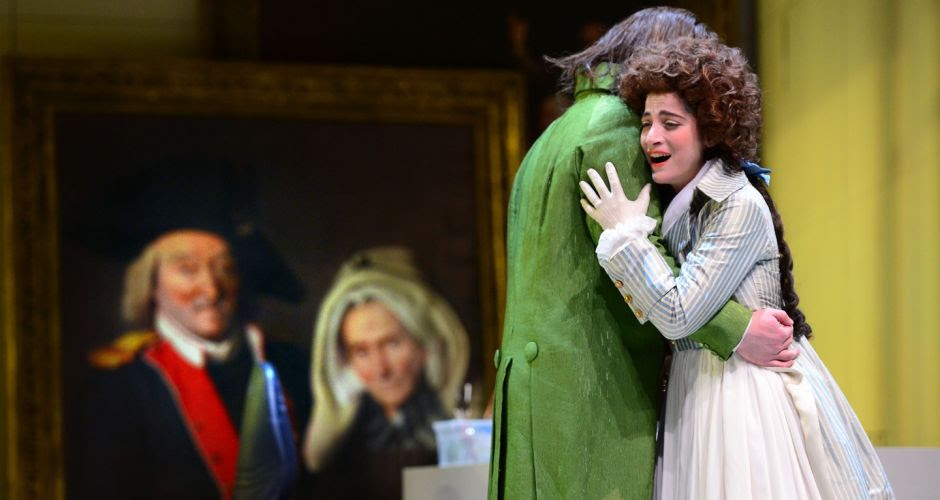 "Set in Revolutionary France, during the Terror of 1793-94, Thérèse (1907) is a melodrama which pits public against private, loyalty against love. As with Foroni’s Cristina, the eponymous heroine is based on a historical figure, in this case, Lucille Desmoulins who was executed in 1793, eight days after her husband, Camille. In Jules Claretie’s libretto, Thérèse finds herself torn between her allegiance to her husband, André Thorel - a Girondist and man of the people - and her passion for her aristocratic lover, Armand, Marquis de Clerval, who has fled to escape the Revolution. Thorel, the former childhood companion of Armand (his father was the Marquis’ steward), has purchased the Clerval chateau in order that it may one day be returned to his friend. When Armand reappears, still deeply in love with Thérèse, she is torn between her amorous feelings and her fidelity to her marriage vows......."

"....At the heart of the score are the passionate exchanges of Thérèse and Arnaud, and French-Canadian mezzo soprano Nora Sourouzian and French tenor Philippe Do prove that they possess the stylishness, lyricism and sensitivity to convey the poetry of these scenes most beautifully. Do has both the strength, though the voice is never forced, to bring a fierce ardour to the passionate high-points and a floating mezza voce which can modulate the emotional fire with sensitivity and lightness. Thérèse’s Act 2 aria, ‘Jour de juin, jour d’été’ was deliciously sweet and exquisitely phrased. Brian Mulligan, as André, made a considerable impact, demonstrating fine stage presence and singing with an open, burnished tone. Damien Pass was very competent in the small role of Morel. "
at May 01, 2014