Audiences for opera broadcasts in the cinema are old. That's news? The survey has gone viral. But here's where genuine local knowledge comes in. The survey  was done by the Guildhall School of Music and Drama. Excellent music and drama students but not necessarily sophisticated pollsters. It was commissioned by English Touring Opera. ETO is a wonderful, innovative company but its business is touring, reaching places outside London, where people might not otherwise experience live opera at all. The ETO is unique, and serves an important public purpose.  But one can understand why they'd be interested in the impact of HD, when anyone can watch the Met, ROH, Salzburg and Munich. Personally I think ETO has a special place !

The story, however, has gone international, raising a lot of questions that don't have much to do with the survey at all. Some have even blamed the  Met's problems on HD. So it's a good time to separate fact from fabrication.  Opera has been filmed almost as early as the technology has been available. In the 1970's Rolf Liebermann at Hamburg pioneered the idea of opera created for film, which resulted in works of genius like Wozzeck and Die Freischütz which combined musical astuteness with visual imagination. Opera films were often broadcast on TV, some even written for TV, like Britten's Owen Wingrave. So why should HD be any different?

Watching live streams is fun, but fundamentally not all that different from watching a DVD. The art itself does not change. Directing an opera is completely different from directing a film: the skills are not usually compatible.  An opera director works through character and motivations: a film director chooses angles which best bring out the intention behind the production. In a good production live, there's often so much to take in at once that it's often easier to watch something through the eyes of a film director. Real opera devotees often catch both the live and filmed broadcast, because the slight shift of perspective adds to knowledge and thus to enjoyment.

Millions of people can watch filmed opera in cinemas and online, who might never otherwise be able to attend in person. What's so wrong with that? People get old and immobile but they should not be written off as human beings. Millions grew up with audio recordings and DVDs. Of course their experience counts, every bit as much as those lucky enough to be in the right place at the right time. Being in a house is exciting, even when you attend many times a week, but the primary aim is opera as music and as art, not the frills, the popcorn or fancy new stilettos. As I've said many times before, there are numerous different audiences, each with different interests. So there's a case for tolerance and inclusivity.

Filming opera is expensive, so it's not a universal panacea, however tempting it might seem. Some smaller houses have been burned. However,the reality is that the potential market for opera is infinitely bigger than house capacity. The Royal Opera House enjoys 95% occupancy, so there's little room for growth in those terms.  Film is an essential part of the business model. In 2013, 675,000 people watched 415 performances in house. Since 2012, over three million have watched a much smaller number of operas in cinemas and online. Go figure. Glyndebourne is a much smaller house - usually packed out - but it's so good that it can do deals with newspapers to broadcast online.  Statistically it just doesn't add up that film bleeds live. Online audiences may not rush out for live tickets, but so what? They are paying attention. 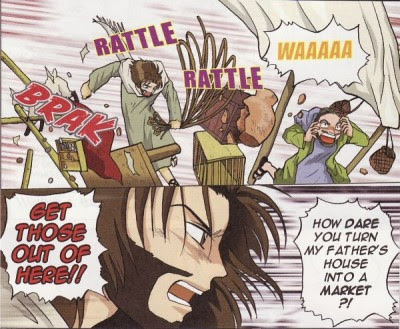 The game changes all over again with digital broadcasting. On 20 May the ROH broadcast La Traviata live on its own youtube channel.  In cost terms, this is more effective than sharing profits with a cinema chain. In Europe, there are online channels that broadcast recent productions as well as old. Siemens pioneered digital screening technology and paid for 3 years of screenings from  Bayreuth.  How do companies make money? Some charge, which is fair enough. If we care for the arts we should be mature enough to realize you can't expect good things for free. But the returns are simply the amount raised by subscription.  The size of the online market shows that the demand for opera is greater than seat sales alone.  There's a huge potential audience out there who are interested enough to care and to learn. Much better such audiences than the kind of boors who think they "know" opera because they can shell out for pricey tickets. Gimmicks like fast food eateries don't help sales,. The South Bank shows how artistic purpose is lost when artistic vision is compromised.  Online and HD grow the audience through education.  When  the Berliner Philharmoniker began its digital concert hall, it became the world's "home" orchestra,. Competition can be good or bad, but raising standards is good for everyone.

Email ThisBlogThis!Share to TwitterShare to FacebookShare to Pinterest
Labels: music education, music for film, music on film, opera on film

ETO does an amazing job. For me, nothing on screen, whether from Salzburg, Bayreuth, or Covent Garden, will ever compare with the experience of attending, say, its premiere performance of Promised End, or the recent, visceral King Priam. But as you say, there are different audiences, and not all of them are so fortunate as to live close to so much going on. Part of the problem is the idea of 'competition'. Arts organisations, perhaps above all others, should embrace collaboration. It makes sense: one isn't put off going to Don Giovanni at the ROH because one has seen it in Berlin, or at the cinema, or for that matter at ENO. Interest and commitment arouse greater interest and commitment.

What ETO does is unique, so strictly speaking they don't need to worry long term about ROH and the Met Thank goodness for us they are in a partnership with ROH so we can see them in London as well. Partnerships like this are the way ahead.