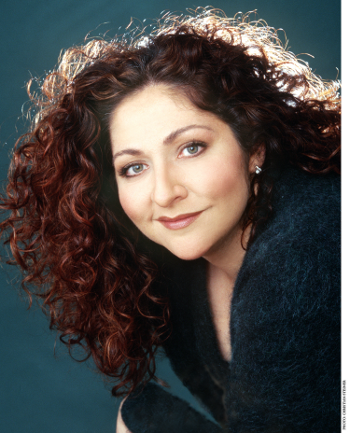 Electrifying Strauss Elektra at BBC Proms 59 = Semyon Bychkov, Christine Goerke. Amazing on radio asnd even more so live. Indeed, this was one of those rare occasions when you can say, in awe, "I was THERE!". The Royal Albert Hall is a huge barn of a hall.  Six thousand seats placed round a hollow space that rises upwards, culminating in a dome that used to suck up sound until they added those space-age acoustic baffles.  But there's nothing like a Royal Albert Hall Prom. The atmosphere is so intense that the excitement must communicate to performers. If they've not overwhelmed (understandably) they can be challenged to give the performances of their lives.

Yet, despite the size of the Royal Albert Hall, Semyon Bychkov conducted an Elektra so full of intelligent detail that the vast cavern of the building seemed to burst with colour and incident. The BBC SO aren't normally an "opera" orchestra, so perhaps they were responding to Elektra as dramatic orchestral music. Bychkov made the music move, almost as if it were an invisible demonic force. Agamemnon has long been dead, yet his ghostly presence hangs heavy over those he's left behind. In Charles Edwards' production (read my review here) the dead king hovers over proceedings like a shadow. Bychkov's intense, impassioned conducting suggests the psychic havoc the king must have unleashed in his time. Perhaps the savage, pathological genes Elektra and Orestes carry came from him  Their lust for revenge goes far beyond filial love. Maybe Clytemnestra killed him because he wasn't a nice man.

Soon after Elektra starts singing, the "dance" theme  bursts out. Dance in this case is a form of madness. Bychkov conducted the circular rhythms so we could feel the obsessiveness percolate. Savage climaxes, the strings screaming and stabbing. The axe lies buried underground but "sings" through the orchestra. Strauss builds maniacal laughter into his music, and  even  the unearthly bright stare some schizophrenics exhibit. Woodwinds played sensually but with morbid undertones. Bychkov's ear for detail is musically informed but also psychologically true. Someone complained that the ROH production wasn't "palatial" or elegant. But for Strauss, and for Bychkov, this palace is a prison of the soul. Andris Nelsons was brilliant at Covent Garden last year, but Bychkov works with the dynamic of the Royal Albert Hall to bring out subtleties often missed, like the parody of waltz and "family values". In the final dance, Bychkov highlights the percussion,  with its intimations of the organized violence of a military society where women like Elektra (or Clytemnestra) can't act other than through men.The lushness of this instrumentation is deceptive. Like the palace, it's poisoned. The savage last chords made me think of Wozzeck.

Christine Goerke has created so many Elektras in recent years that she probably owns the part these days. Her voice is richly resonant, shading into mezzo territory, which allows a remarkable range of emotional expressiveness. Elektra's a killer part, forcing the voice up to the extremes, torturing technique, but Goerke delivers. She's not afraid to let the role dictate the way she sings. When she recognizes Orestes, her voice rises to near-scream, then softens into tenderness. How long it must have been since Elektra felt safe enough to feel human kindness, Goerke's voice warms yet still carries memories of pain.  Through Goerke, we glimpse what Elektra might have been. At the Royal Albert Hall, Goerke displayed a new dimension to her artistry. She wasn't giving an "opera house" performance but enacting the role in such a way that she filled the massive auditorium, not with amplified voice but with amplified personality. Truly remarkable: in all these years of Promming, I can't remember any singer taking control of the RAH like this. She made an impact that felt strikingly personal, up close and human, as if the distance her voice carried meant nothing, and we were one-to-one with Elektra in her isolation.

This warmth in Goerke's voice was paralleled by Gun-Brit Barkmin's Chrysothemis. Little sister wants marriage and babies, not death   Yet the firmness in Barkmin';s timbre, and the assertive confidence in her delivery  brings out the underlying strength in the role. We need to hear more from Barkmin. ROH take note! Chrysothemis is no Barbie Doll image of womanhood. Although Justin Wray is creditted as stage director, there wasn't any evidence of directing (other than use of lighting) until the final scene when Goerke and Barkmin embraced each other. Subtle, but significant.

Much-loved Dame Felicity Palmer sang Clytemnestra, receiving much applause. Although her voice is beginning to show its edges, Palmer's experience in the role paid dividends. When she sang about her fears, she made the chaaracter sympathetic. Cold-blooded killers don't fear bad dreams or, for that matter, fall for toy boys.  Johan Reuter sang Orestes, with Robert Künzli as Aegisthus. Katarina Bradić , Zoryana Kushpler, Hanna Hipp, Marie-Eve Munger, Iris Kupke, Miranda Keys as the maids and their overseer, Ivan Turšić as a young servant  and Jongmin Park as Orestes' tutor completed a fine line-up.