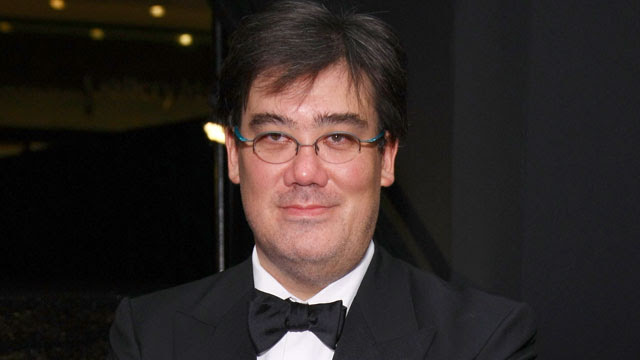 (For my review of the gorgeous Leipzig Gewandhaus Beethoven 9 Prom  Gilbert redeemed please see here).  Because Riccardo Chailly was scheduled to conduct the Leipzig Gewandhaus Orchestra in Mahler's Symphony no 3 at the BBC Proms, (Prom 73), tickets sold out within hours. All my friend could get were pricey seats in a box in the Grand Tier. The Leipzigers and Chailly are so good and their Mahler so distinctive that the cost seemed a good investment.  The acoustic in the Grand Tier really is good, though you can hear every cough and dropped booklet resonate around the building. Perhaps that's why I didn't feel entirely bad about Alan Gilbert replacing Chailly at short notice (Chailly broke his forearm). The sound quality meant that details were finely formed, and the very quietness in some passages indicated thoughtful engagement with some of the ideas in the symphony.

Like Mahler's First and Mahler's Seventh, the Third can take a variety of interpretations, from the black, haunted humour of Horenstein,  to the blazing sunshine of Abbado, to the vigorous mountaineering of Rattle, and the exceptionally poignant Welser-Möst at the Proms in 2005.  I also have a soft spot for Eugen Szenkar's  recording, made soon after the war with musicians who hadn't been able to play Mahler for 20 years. If you want a Mahler as street fighting man, that's worth hearing (and quite valid since Mahler's politics were leftist). My gut instinct is that Gilbert has something interesting to say, but perhaps not on this occasion and not with the Leipzig Gewandhaus Orchestra. That's much more than can be said of some other conductors.

"Pan erwacht: Der Sommer marschein ein", Mahler described the huge first movement in his original drafts. Pan, the god of wild open spaces, mountains., music and sexual danger. Perhaps the "marches" here aren't literal, pastoral rather than urban or  military, but what matters is the progression of ideas giving rise to a relentless series of forwards movements.  Mahler worked on this symphony in the Salzkammergut, where valleys and lakes are hemmed in, almost claustrophobically, by huge mountain ranges. Mahler, a keen hiker (and rider of early mountain bikes)  would have understood mountains as challenges to be conquered in the brief Alpine summer. The First Movement can be read as a panorama of peaks, each opening out to new vistas, pushing towards a resolution that might ultimately be spiritual transcendance. Thus the "panpipes" in the horns and the winds, and the significance of off-stage brass: something invisible is pulling the symphony, and the listener ever higher and further away from an earthly plane.

When Chailly conducted the Royal Concertgebouw Orchestra the fit wasn't quite so good, because the Amsterdam orchestra had its own great Mahler tradition. But when Chailly moved to Leipzig, to conduct the Leipzig Gewandhaus Orchestra, with even older traditions (though not in Mahler),  the magic worked perfectly right from the start, vindicating Donald Mitchell's high praise for him. The Leipzigers are famed for their warm, golden sound, which fits perfectly with Chailly's strengths. I hate using national labels but they might explain why the Leipzig Gewandhaus Orchestra and Alan Gilbert don't have quite the same chemistry. Throughout the First movement of this Prom, it felt as though the Leipzigers had their own approach to Mahler (nurtured by Chailly) while Gilbert is an American conductor.

The all-important brass entries seemed odd, as if the players were following some instinctive volition, rather than following Gilbert. His signals were pretty straightforward, but these players are so good they can almost conduct themselves. Gilbert didn't define the "marches" or the mountains" quite as monumentally as they can be done. Rather, he stressed the quieter passages, as if creating an aubade of aural texture. This is perfectly valid for it connects to the idea of dawn and regrowth : the hunter dies, but the animals go on. Gilbert's attention to detail brought out the bird song and hushed, chirping sounds in the undergrowth. Those kukkuks, the flute melodies,  the hushed murmuring strings  and hints of Mahler song: very Des Knaben Wunderhorn. I kept thinking of Messiaen. The formative years of Gilbert's career were spent in Lyons, where Nagano laid the foundations of another distinctive European tradition. But Gilbert works in New York, where he has to blend in with expectations there.  So Gilbert falls between different stools, so to speak. But he's much more interesting than many other conductors. I suspect, one day, he'll find his niche and get the respect he's due.

As the performance continued, the match between conductor and orchestra tightened. There were many very good moments , especially in the Misterioso, and the final section blazed with warmth and a sense of fulfilment. The Leipzig Gewandhaus Orchestra is so wonderful that just letting them get on with what they're good at would have worked better in a high-profile gig like the Proms. But full credit to Gilbert for trying to do his own thing, Maybe he will, soon, and shake up an orchestra without the sumptuous stature of the Leipzigers.

The most perfect part of the evening for me was the singing. It usually is, but this singing was wondrous. Gerhild Romberger was superb: not flashy, but self effacing and all the more convincing for that. She let the rich resonance of her voice command attention, and it filled the vast barn that is the Royal Albert Hall. Her "O Mensch" felt truly plaintive, as if she were weeping for the death of the old world and giving birth to the new. The eerie woodwind twining around her voice sounded like an instrument from the ancient past.  The Leipzig Opera and Gewandhaus Choir (women's voices) and Leipzig Gewandhaus Children's Choir (delightful Bim-bams) provided support almost as lustrous as the great orchestra they work with so well.

NEW DELIGHTED to report that Beethoven Symphony no 9 went extremely well!  I've heard Chailly conduct Beethoven 9 with this orchestra twice live. Brilliant! Alan Gilbert isn't Chailly but he's vindicated. Excellent sense of build-up in the first movement, pinpointing details which will emerge later in the symphony. How do the double basses play as quietly as that?   A freer and more sponatneous performance altogether - Gilbert and the Leipzigers meshing together well.  Orchestras at this level know what they are doing when they choose a conductor. Dimitry Belosselskiy magisterial in the bass part. Steve Davislim astounding - he can string phrases out without seeming to need space to breathe.  As he sang, I noticed how the jauntiness of his part was matched by the jauntiness in the music around him. The "Turkish" pipes and drums, perhaps? If I have time I'll write more.