Calling Facade: an Entertainment the creation of William Walton is a bit unfair. The music in the piece comes primarily from Edith Sitwell's bizarre texts where meaning is subservient to the strange syntax and rhythms of the spoken word.  In this version of Facade, Walton's contribution serves as understated background   Everything in Facade predicates on the text, which isn't illustrated like song, and not even sung or spoken in a normal way, but in a kind of English Sprechstimme.

Everything rests on the innate musicality of the Speakers. At the Cadogan Hall in Proms Chamber Music 8 we had Dame Felicity Palmer and Ian Bostridge. They were a formidable partnership, She a Grand Dame with plummy tones that express the type of English Grand Dame whose like we may never see again. He, immersed in Britten (who adored Sitwell) and the wilder shores of British imagination. Facade isn't spoken, like speech. It's declaimed so the very nature of language is inverted  as musical form. There's something so deep and so hidden in Facade that that it's very title is a hint. "Jai'seul la clef de cette parade sauvage". Sitwell's inspirations might have been Rimbaud and Apollinaire, though she's not quite as incandescant. She's English,  after all, and more genteel. In early performances, the performers hid behind a curtain painted with a Grecian face, transmitting the words through a hole, rather like a Grecian oracle. Or, one might dare say, like the Wizard of Oz through an emerald palace. The speakers spoke through a Sengerphone, as pictured above, which would have further disguised and dehumanized the voices. That's Edith Sitwell herself in the photo. 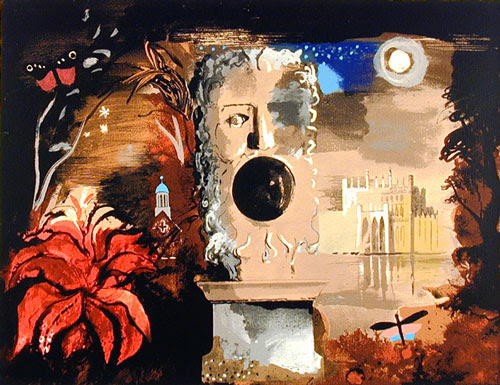 Bostridge did poems where extreme agility and rapid fire diction create jaunty staccato. Crisply defined word endings, sharp "d"s and "t"s, delivered deadpan: Sitwell didn't want soppy sentimentality. Yet Sitwell's Neue Sachlichkeit masked great sadness. An abused, awkward child, she hid behind strange costumes and affectation, as if the mask - the facade - of eccentricity could mask the pain within. Bostridge's perfect poise let just enough of Sitwell's singularity through so we could feel the person behind the arch cleverness. What a coyly secretive language English can be. Bostridge ever so subtly emphasized the silent "h" in words like "when" and "where" Even the way he clipped words like "room" to "rhum" as repressed,  upper class Englishmen still do, suggested meaning beyond the obvious play on words.

Dame Felicity did poems where longer lines allow words to pop up like images in the subconscious. Once could analyze the words, like people do with Bob Dylan lyrics, but it's better I think to focus on the play of sounds within words, and the deliberate dissociation of fractured images. Hence the exoticism,, which constantly throw the listener off track. There are images of Spanish grandees ("mouldy" men with young brides) and Cockney couples whose accents Palmer mimics with great verve. We're in the world of Rimbaud's Les Illuminations, though Walton's music is far less inventive. In this version of Facade, Walton's contributions are subtle: jazz riffs on saxophone, which would have seemed much more daring and avant garde in the early 1920's then they do today, and sultry woodwinds. Even the Hornpipes suggest images hidden from plain view. And oh, that gorgeous Sir Beelzebub where both speakers and the orchestra dance in mock heroic glee.