Is introducing children to opera smug parenting or a valuable cultural eye-opener?

"Is introducing children to opera smug parenting or a valuable cultural eye-opener?" asks Chris Shipman of the Royal Opera House, ahead of a new opera for two to six-year-olds, entitled Dot, Squiggle, and Rest. The toddler-friendly opera will feature puppetry, dance and animation and has been intended as an introduction to the art form. Simple answer: depends on the children, depends on the parents.

There are plenty of smug, self-obssessed and status-mad parents around, who use their children to promote themselves. Kids are not stupid: they pick up on false vibes. Little Ptolemy and Little Drusilda might rebel but chances are that they'll grow up just like their parents, using opera as a consumer product to prove that somehow they're superior to other people. For people like that, opera becomes a weapon with which to beat other people up. Literally as in a recent case. Imagine if the assailant had been an underclass rapper and the victim an opera-going taxi driver?  No, it's not alright. Maybe children of such parents grow up to be successful because they don't let anyone else get in their way.

On the other hand there are a lot of parents who want their kids to grow up to be happy human beings. The arts, and opera in particular, are an ideal way to introduce kids to the world beyond themselves.  Children naturally learn from fantasy, so opera is an extension of story-telling tradition.  Unlike movies, opera is physical theatre, so children learn how magic can be made by overcoming technical challenges. Above all, children can learn to listen to other people's ideas, and develop their own emotional responses. As a culture, I think we are becoming too materialistic and too literal. Most children haven't yet lost that sense of wonder and openness that is the basis of creative imagination. Opera isn't a gateway to "culture", but a way of learning about emotions, relationships and artistic expression.

Many operas are written for children. Some are a lot better than others - as all operas will be. Benjamin Britten, who was a bit of child himself, passionately believed that opera for children could be exciting without being patronizing. A while back, I wrote about the brilliant Noyes Fludde at Blackheath, devised in conjunction with a local school, so the kids became involved at all levels. The children's eyes shone with excitement, their minds clearly active with ideas. A miracle to behold. Then a cynical adult sneered "That wasn't a proper rainbow". The death of imagination is the death of art. 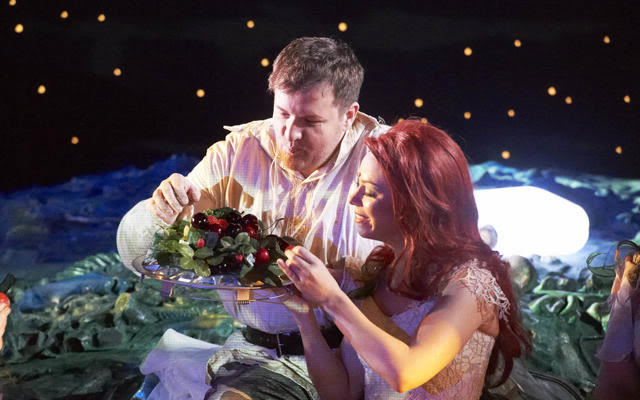 In continental Europe opera for children is a well-developed genre. Zurich Opera does a wonderful Mozart The Magic Flute specially for children (available on DVD) . It's not trivialized. Children can understand the idea of overcoming trials. The Wiener Staatsoper does an even more interesting Wagner Die Feen, which adults can learn from too (See my review here)  A friend's 3 year old so loved the Ceebeebies Prom that he was high for days. My son, aged two, enjoyed Amahl and the Night Visitors so much that he ran out and stood near the stage, transfixed. I didn't stop him. He was as good as gold, taking in every moment. Last year, at Faust  at the Royal Opera House, I sat near a girl aged about 9 or 10.  Obviously a rich little girl, Russian I think, with governess and minder. The little girl watched with avid concentration, leaning forward.  Faust for a child ? Why not? What's so difficult about an old man who sells his soul to be young and happy again?  Gretchen dies, but other fairy tale heroines suffer grim fates, too.  This little girl was clearly entering into the experience and getting much more from it than her attendants. Obviously an intelligent child, not at all someone to be patronized. She'll grow up an interesting person. So, yes, opera for children, but the right children, the right opera and the right motivations.

Read my numerous other posts on children and opera/classical music, such as Will childrren ever learn about operaand End the \Missionary position in classical music
at September 22, 2014

Well, for me introducing children to opera is a valuable cultural eye-opener with no doubt!! classical music is important (for everyone)! I believe that kids need to have a lot of different "stimulus" to be able to decide what they like based on their own character !! And this is what I try to do with my children! during our lockdown here in Greece, i watched several different performances from greek national opera that hosted several online streaming with many options, like opera, ballet performances, dance performances for children, operetta https://www.nationalopera.gr/en and my kids enjoyed it as much as i did!