Surprisingly symphonic - Igor Stravinsky's Firebird (L'oiseau d'or) with Simon Rattle conducting the Berliner Philharmoniker. BBC Prom 64. What a pleasure it was to hear this familiar music played with such elegance and grace! Although The Firebird was written too be danced to, this performance was a reminder that it is also very fine pure music.  Rattle and the Berliner Philharmoniker dispelled memories of the more raucous suites, concentrating instead on the inherent beauty of the piece. Strictly speaking, music for ballet needs to follow the human body, and the physical capacities of dancers. As an orchestral piece, the music moves in a very different way because instrumental musicians spread the effort between them. With Rattle and the Berliners, The Firebird could breathe on its own, revealing its strange, exotic mysteries at its own pace.

Rattle preceded Stravinsky's Firebird with Rachmaninov's Symphonic Dances (1940) which wasn't actually written to be danced to. The Symphonic Dances are an exercise in memory. Rachmaninov was re-imaging the Russia of his youth through the splendour of the ballet. Quite probably the work could be choreographed, but its pulse is fundamentally symphonic. 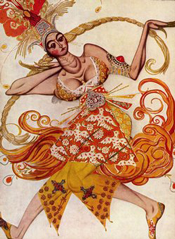 While Rachmaninov re-images Russian ballet, Stravinsky's Firebird was written for the Ballets Russes. By pairing the two pieces, Rattle emphasizes the Firebird's fundamentally orchestral origins. Six years ago to the very day, Vladimir Jurowski conducted this full Firebird at the Proms, pairing it with Rimsky-Korsakov's opera Kashchey the Immortal. (more here)   Rattle's Firebird dances, but with abstract sounds. The "dancers" are instruments, who create impressions of dance in the imagination.

The strings pivoted en pointe, percussion suggested bright, golden colour. The Berliners are such good players that they make the music move as if it were a physical force, sliding and turning with exquisite grace.  While Jurowski's Firebird emphasized the savagery of Russian myth (ie the ogre), Rattle's Firebird emphasized its idealistic magic. The woodwind melodies rose sensuously from a swathe of shining strings: exotic, mysterious and seductively tantalizing. This Firebird  flew free from the original fairy tale, soaring onto an altogether more elevated, esoteric stratosphere. The woodwind and violin  melodies sounded exquisitely poignant: so perfect in its beauty that it broke my heart, knowing that it couldn't last.

Rattle didn't need to milk up the inherent drama. The Berlin Philharmonic are so good that they respond well to understated conducting.  Rattle isn't Gergiev. That's not a value judgement, since both their approaches are valid. Rattle's dynamics aren't extreme, but they're atmospheric, creating a Firebird of great sensitivity and depth. When the woodwinds theme returned for the last time, warmed by strings and harps, it felt like a kind of apotheosis, a transcendance Mahler would have been pleased with.

Listen to Rattle and the Berliners  in this same programme in their 2014-15 season opener on the Berliner Philharmoniker Digital Concert Hall.  The Prom performance is more relaxed but equally enjoyable. Such is the magic of the Proms and the Royal Albert Hall!

For their encore, Rattle and the Berliners played the Intermezzo from Puccini Manon Lescaut,the opera they performed at Baden-Baden (reviewed by me here)
at September 06, 2014