ENO Otello - all the makings of a great classic 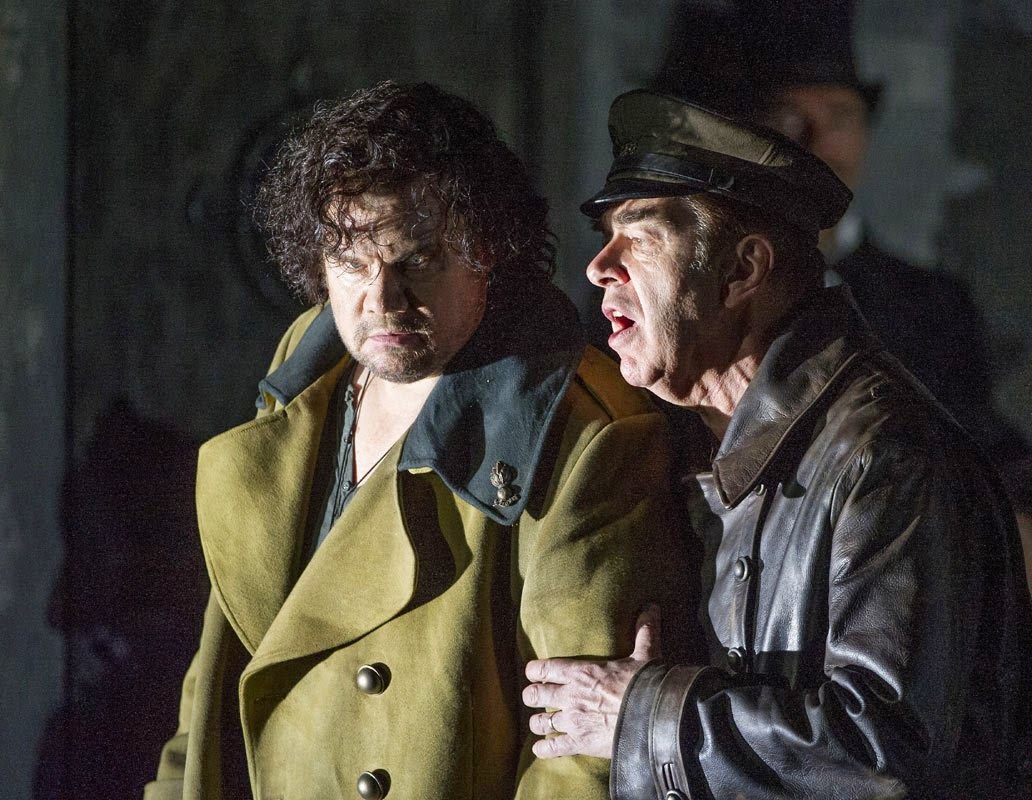 Verdi Otello at the English National Opera. Definitely worth seeing, especially when things have settled after the premiere. The set is so stylish that it would have been an overwhelming experience at the Royal Opera House with a top notch international cast and conductor and sung in Italian. Fundamentally, opera  costs money. Economies of scale are utterly  relevant.  It just does not make business sense to throw money at micro mini opera companies and pub opera, while squandering the existing body of experience we have inn the ENO and ROH.  This new ENO Otello is good, but how much better it would have been in a climate which recognizes that serious art needs serious support.

This Otello has huge potential, and should get the recognition it deserves. This beautiful set, designed by Jon  Morrell, is  extraordinarily versatile.  Sets as good as this take real expertise, and a genuine sense of creative vision.  Morrell's strong basic structure reflects the  drama itself,  where the characters are caught by unrelenting fate. Onto this bedrock, Adam Silverman's lighting designs are powerfully evocative/ We saw lightning strike, and discordant, disturbing switches of light and darkness. This storm suggests that cosmic forces operate behind the drama that is to follow. The same basic set adapts easily to depict the walls of an Italianate palace,  not in Venice but in Cyprus, a fortress. Hard marble elegance and crumbling paintwork, as one sees so often. Otello is a hero who has achieved great public honours,  but his success is a facade. Yet he's insecure. Iago destroys him by manipulating his inner weakness.

This staging is so expressive that it told the story with great effect and really needs to be revived, soon, perhaps even in  a bigger house with cast and conducting to do it justice. Edward Gardner is dearly loved  and even more popular now he's moving on. Read my "What Bergen means" HERE.  He's good but he's not necessarily an instinctive Verdi conductor. We shouldn't let our fondness for Sexy Ed make us forget that not everyone can be exceptional in everything.  Some very nice playing though: the Song of the Willow was poignant enough that my companion thought of the Shepherd in Tristan und Isolde.  Verdi needs more passionate extremes, perhaps even a sense of madness, especially in an opera about how a great man can be destroyed by irrational emotion.

An excellent Otello in Stuart Skelton. He had the force to evoke Otello's power, but not at the expense of sensitivity. Although it's no longer acceptable to stage Otello painted up like a Black Minstrel, we must never forget wny Shakepeare made Otello a black man. Against all odds, he's risen to power in a society ruled by powerful families who don't value outsiders unless they're useful. Cyprus is a fortified colonial outpost, not part of the metropolitan Establishment in Venice. The lightness in Skelton's timbre is good at creating the more sensitive side of the character. Skelton's Otello is a likeable man, with whom one can sympathize, but he's not quite demonic enough.  Otello is a tragedy because the character kills what he loves most. Otello  might be a seething cauldron of complexes, but Skelton's much too lovable to terrify, though he sings so well,  It's not face paint that makes a good Otello, but the way his personality is expressed.

The contrast between Desdemona's "whiteness" and her husband's "blackness" underlines the gap between them; a gap so deep that it's resolved in violence. Leah Crocetto looks the part, and has nice, round plummy tones. But there's a lot more to the role than niceness. Crocetto's singing was good, but more suited to concert performance. Good singing too from the rest of the cast, Allan Claytron's Cassio shone. Significantly, he wore a blond wig, which might be another reason for Otello's insecurity. Jonathan Summers sang Iago, and  Pamela Helen Stephen sang Emilia, his wife.  Peter Van Hulle  sang Rodrigo, Charles Johnston sang Montano and Barnaby Rea gave more to the small part of Ludovico than it usually gets.

All these relationships are important, and written into the music and libretto. David Alden is an excellent director, but the dynamic in the first two acts was relatively subdued, becoming much tighter in the third and fourth acts. In a livelier cultural climate, Alden could have done more with the veiled undercurrents in the drama, but these days short-term success dictates art.  David Alden is one of the grand old men of British theatre and opera. John Berry, ENO Artistic Director, presented Alden with an award marking Alden's thirty years at the ENO, starting witha Mazeppa a production that apparently had audience members fighting in the aisles.  The present obsession with small scale might leave us with nothing but pub opera, which might suit some. But for me, really good opera needs audacity and the resources to think big and bold.
at September 14, 2014