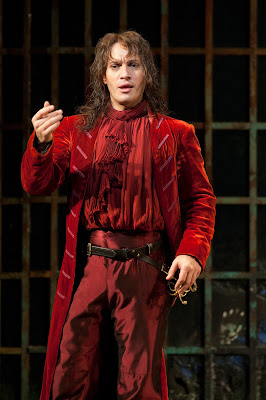 Erwin Schrott triumphed as Don Giovanni in the Mozart/da Ponte series at the Royal Opera House. Schrott exudes charisma, which gives him an advantage not every singer can muster, for Don Giovanni is a larger-than-life personality who needs to be expressed in the grand manner.  It's pointless to nitpick a portrayal as passionate as this. Schrott creates Don Giovanni in all his malevolent glory -- virile, confident, arrogant. bursting with animal sexuality, yet manages to hint at the manic obsession that drives the  character. Schrott hints at these fears in brief, quieter moments, and slips back into macho mode with increased vehemence. Stunning. To match the well-toned voice he also has a well-toned body. At last, director Francesca Zambello's bizarre idea that Don Giovanni should dine semi-naked  with the Commendatore makes a little sense. You're hypnotized by Schrott's biceps and pecs, and forget, for a moment, how silly it is that he should be costumed like this for what he knows to be the biggest confrontation in his life. 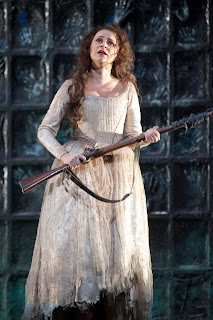 Schrott is brilliant but even he has to work within the limitations of Zambello's brainless staging and untypically leaden playing from the Royal Opera House Orchestra, conducted by Constantinos Carydis. Also the more reason in this production to appreciate the efforts of the singers, who rise above what they have to deal with. Leporello, for example, should give Don Giovanni a run for his money. He's a servant, but not entirely subservient. He's also to some extent culpable for Don Giovanni's crimes. But in Zambello's production, he's portayed as a buffoon, even more peasant-like than Masetto's peasant friends. Why would a sophisticate like Don Giovanni hire someone this bucolic? Nobody could possibly be fooled by this servant in his master's clothes. So the production plays against anything Alex Esposito might make of the role. He sang in the 2008 version of this production, and has done the part many times, so he should have been aware how the production takes the bite out of whatever Mozart and da Ponte may have meant it to be.

Ruxandra Donose is a fiery Latin Donna Elvira, with a spirited edge When Donna Elvira sets out to confront Don Giovanni, she wears what looks like a dirty dress, hem ruched up over her calves in a way no aristocratic lady would dare to be seen.  It's probably not the way to play power games with Don Giovanni, master of intrigue, but Donna Elvira is no strategist. Donose's "Mi tradi" takes on a wild air, expressing Donna Elvira's emotional trauma.  Donose has a very strong background in French repertoire, so imbibes its values of intelligence and clarity. This enhances her feel for the fundamental poise of Mozart's style, even in an opera which should be as dangerous as Don Giovanni. 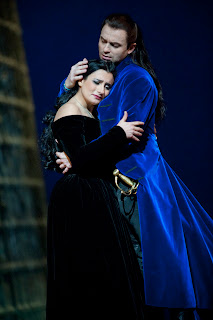 Carmela Remigio was making her Royal Opera House debut as Donna Anna, though she's taken the part of Donna Elvira many times (Please read this interview in which she speaks about the challenges). She specializes in 18th century opera, so brings a late baroque sensibility to what she does. She's far closer to the spirit of Mozart than this maudlin production deserves. She sings with tight focus, suggesting Donna Anna's tension, struggling with feelings she can't articulate. Her sexuality is aroused, but she's trapped by what society expects of her. Fortunately, Pavol Breslik's Don Ottavio is sensitively portayed and sung with more authority than the role usually gets. Donna Anna might  luck out, after all. Breslik's tender "O mio tresoro" was interrupted by the loudest snort I've ever heard from any audience. I don't condemn coughing as it's involuntary, but it's not funny to choose to blow one's nose with such violence at this point. It sounded like a boo, not at all fair on the singer.

Throughout this opera, Mozart plays with the idea of switching identities, expressed through the balance of voice types. Kate Lindsey's Zerlina was pert and bright, almost strident, but a good foil for Matthew Rose's deep, authoritative Masetto. Inspired casting!  Rose's Masetto is big in every way, not simply because he's so tall : this is a resonant voice, one can imagine him  taking on Don Giovanni, at a stretch, and certainly the Commendatore.  As for the Commendatore he was hardly present at all. Instead, a huge golden object kept swaying in the background, eventually revealing itself as a giant hand, its finger pointing at Don Giovanni. One of the truly horrific moments in the whole repertoire, reduced to something out of Monty Python, worse still but prettified and shiny.Whatever Reinhard Hagen might have done with his role, he was completey upstaged, for no obvious dramatic or logical reason whatsoever.

Judging from the audience reaction, this Don Giovanni should be a great hit, though not necessarily for the best artistic reasons. Many  burst out laughing at the subtitles, as if to prove they got the joke. Yet if they really know the opera, they'd know it's not a comedy. Its wit is savage irony, for the story is essentially tragic. Don Giovanni's sex addiction is a sign of weakness, a symptom of the corruption of a power structre held together by exploitation. In this world of peasants and aristocrats, everyone gets screwed.  Instead, Zambello's production ignores the fundamerntals, and plays up irrelevancies like the Madonna, crucifixes and the objects Masetto's friends carry for no clear purpose.  It trivializes the drama by introducing an inordinate amount of stage noise, further encouraging new audiences to think of Don Giovanni as merry slapstick. This is Regie-opera at its worst, but because it's colourful, those who don't like directors will be fooled. So thank goodness for the singers in this cast, who have salvaged what they can, and used their experience and instincts to present a wonderful evening of song. For the singers, and for Erwin Schrott, this production should not be missed. (It runs to 29th February) FULL REVIEW, CAST LIST and MORE PHOTOS in OPERA TODAY.