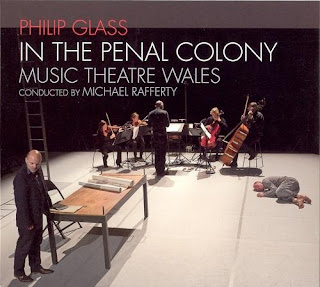 At last, Philip Glass's In the Penal Colony is available on CD. In a strange penal colony, prisoners are tortured by a bizarre machine. A visitor arrives, determined not to be involved. But the horror is so great that his resolve is breached. When the Officer is confronted, he cannot cope. His whole psyche is trapped in this psychotic system of arcane ritual.  In extremes of obsessive compulsive disorder, insane things seem mperfectly logical to those trapped within. It's also a paradigm of totalitarian society, where authority isn't questioned.

When Music Theatre Wales performed In the Penal Colony at the Linbury Theatre at ROH in 2010,  (review here) the experience was profoundly shattering. As it should be, given the subject matter and the intensity of the performance. What normal person could feel otherwise? The audio recording cauterizes some of that pain, and allows more detailed listening.

Now we can really appreciate Glass's oscillating cadences and how well they express the psychosis in the tale. The whole penal colony operates like an infernal machine, where everything is regulated, and everyone mechanically obeys ritual, no matter how insane. The Officer himself is a prisoner, for he's compelled beyond reason to carry on what his predecessor did, even though the machine is falling apart. Glass's oscillations whirr and churn., like a machine, yet they adapt to fine gradations of nuance. Nothing is actually mechanical, or repeated without purpose. A powerful current moves under this music, drilling its way into your unconscious, just as the psychosis infected the penal colony. Glass's music is telling us to beware. Listen perceptively and hear the pulse behind the mechanical drone. Hear the "human heartbeat" within and you won't be hypnotized.

Glass describes mind-numbing situations, but his music only numbs if that's how you respond. In Satyagraha (see reviews here and here), Gandhi is overwhelmed by Empire and colonialist values. He breaks through when he rejects industrialism and the machine values it represents. Thanks to mass communications and technology, we're more controlled by machines than any other society before. That's why Satyagraha and In the Penal Colony are much more than brilliant pieces of music theatre. They are timely warnings of what it means to be human. Get this recording - it's an investment in staying sane. Read more about Music Theatre Wales here. They won an award for their oustanding Mark Anthony Turnage Greek, and are one of the more innovative music theatre ensembles in the country. As you will hear on this CD.
at February 16, 2012

I still haven't heard most of Glass's operas (who has?). I struggle mightily with Glass's music. I love the technique, I still have trouble believing there's much behind it. In that way, I suppose Glass and Boulez have a lot more in common than their camps allege.