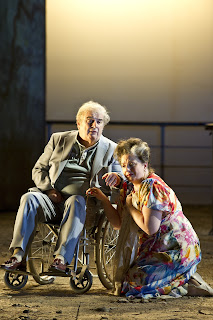 Press reports suggested mass protests against John Adams's The Death of Klinghoffer at the ENO. But there was just one polite demonstrator, who'd left by the end of the evening. Perhaps he saw the show. The subject is emotive, and important, but Adams's treatment is not incendiary. It's the nature of his music. Repetitive, ruminative cadences, which suggest contemplation rather than imposed narrative. Perhaps it's the very anti-drama in this music that provokes response.

Adams's abstracted cadences evoke blurred boundaries : endless waves on the sea, the whirr of a ship's engine, the slow ticking away of time. Unfortunately, this music also evokes tedium. Facts about the hijack of the Achille Lauro are projected onto the stage to keep us alert, but the music is saying something else altogether. Furthermore, Adams sets text counterintuitively, so syntax is distorted in favour of unsettling stresses in places that would not occur in speech. Because our brains don't process language in this way, meaning is sacrificed. It's not good when you have to concentrate on sub-titles to figure out what's being sung.

Alice Goodman's libretto has been criticized for being opaque, but it closely reflects Adam's musical technique. Images are blurred and shift shape. In the opeming Chorus, it's deliberately unclear who the protagonist is. Is she a young woman in love or an old woman awaiting death? Or both? It's immaterial. She's a composite of millions who have been exiled throughout history. When music and text are both this oblique, the thrust of the drama is lost.  Perhaps Adams wants us to savour each moment in detail,  as we savour life itself, knowing it won't last, but the cumulative effect of the First Act is soporific. 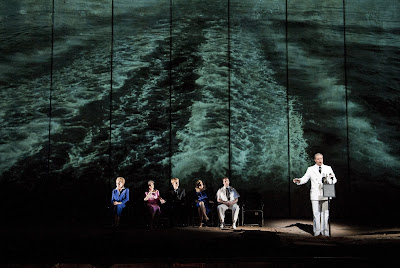 Things pick up in the Second Act, when Adams frees himself from earnest pseudo-documentary.  Up to this point the action has mainly been in choruses. Now we have individuals with whom we can identify. Some of the words they sing come from transcripts made at the time, others are imaginative creations. It doesn't matter. In these arias there's dramatic reality. Leon Klinghoffer is presented as a likeable hero, and at last the opera has human focus. Alan Opie sings Klinghoffer so he comes over as a strong, reasonable man of authority, establishing a moral compass. The Aria of the Falling Body anchors Adams's wavering oscillations with emotional truth.

Michaela Martens' Marilyn Klinghoffer arias are tours de force, the last adding bite. The Captain (Christopher Magiera) in real life handled the situation with cool-headed professionalism. offering his own life to save his passengers, but Adams and Goodman don't dilute the focus from Klinghoffer to make the Captain a hero. Mrs Klinghoffer, in her grief, can't understand why her husband was killed without her knowing. It's a thoughtful detail to include in the opera since in these situations no-one knows everything all the time. Fine vignettes too from Lucy Schaufer (The Swiss Grandmnother), Clare Presland (The Palestinan Mother) and Kate Miller Heidke (The British Dancing Girl), so clueless that she doesn't comprehend the enormity of what's happening. In a much needed twist of humour, Adams adds snatches of pop music around the part.

Baldur Brönimann conducted the orchestra so details surfaced tellingly from the amorphous textures. He's a specialist in modern repertoire and understands how the genre operates. This music is not an undiffrentiated mass. 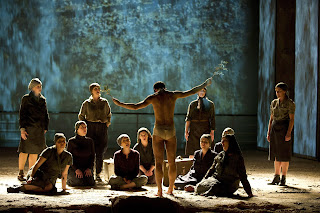 The staging, however, was much less sensitive. Directed by Tom Morris with designs by Tom Pye, it tried to give shape to Adams's oblique non-forms by over-emphasizing the literal, perhaps to create the sensationalism Adams and Goodman avoid. The dance sequences are awful, completely at odds with the story. This subject is not a game. It is more than just a struggle over a country, it's part of the eternal struggle between haves and have-nots. In this production, the Palestinians raise their fists in the classic gesture of the oppressed, For a moment it looks like a Nazi salute. What the hijackers did was evil, but it does not follow that the poor should not act, whoever they might be. The scenes where Finn Ross's video projections fill the stage are far more effective, and being semi-abstract, are more faithful to Adams's idiom.

The Death of Klinghoffer has its longueurs but it's an important statement. Twentyfive years after the Achille Lauro hijacking, terrorism is, if anything, more widespread and more savage than ever before. Twin Towers, the school in Beslan, the cinema in Moscow, and Utøya. Is there something to be learned from The Death of Klinghoffer? Many thanks to the ENO for giving us a chance to hear for ourselves. FULL REVIEW and details in Opera Today