Mark Elder and the Orchestra of the Age of Enlightenment brought Berlioz Roméo et Juliette to the Royal Festival Hall. Extracts from the piece are heard often enough, but hearing the whole work shows Berlioz's intentions more clearly. This Roméo et Juliette  is an orchestra-drama, where the story unfolds in the vivid musical tableaux the music evokes. Voices are only part of the orchestral palette, used solo or tutti when needed. to develop orchestral colour. This is a hybrid form, an opera  with arias and no "roles". Just as Mendelssohn wrote Lieder ohne Worte, Berlioz writes opera without words,

This Roméo et Juliette was conceived to be heard on stage, for much of its impact is visual and theatrical.  Hence the large orchestra and unusual instruments, and the massed choirs, on this occasion dressed in jewel-hued shirts to highlight effect.

Although much is made of the work's roots in Beethoven's Ninth Symphony, perhaps it might be even more prescient to hear this Roméo et Juliette as part of a platform of new ideas about music drama that were growing in the 1840's and 50's. We think of Wagner and Verdi when we think of opera history, who obliterated the altogether different approaches with which Mendelssohn and Robert Schumann were experimenting. That I think is the real significance of this piece. It's an outgrowth from oratorio, but even more radically it is orchestra-theatre, very different from opera convention in its time. 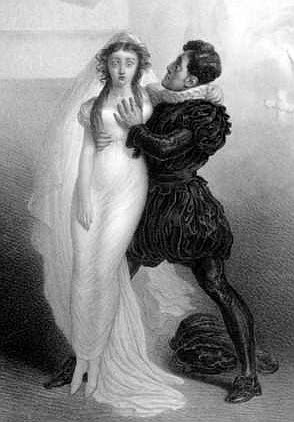 Indeed, its connection to stage play is paramount. Berlioz became obssessed by Harriet Smithson when he watched her perform Shakespeare in Paris.  The picture at right shows Smithson and Charles Kemble in  a contemporary production of Romeo and Juliet. The picture above comes from a production in the 1840's. In an age before close ups and amplification, theatre practice would have to have been more stlyized than we're used to now. Perhaps Berlioz, a music and theatre critic, intuited that good orchestral writing had the potential to express feelings in greater complexity than most actors were capable of. Berlioz's flamboyance often seems to stem from a need to do bigger and flashier than anyone else. This extravagant emotionalism may have been what drew Wagner to Berlioz.  How different it is from the elegance of Mozart and the charm of Donizetti! Sadly, just as Romeo and Juliet were doomed, Berlioz and Harriet were not happy together.

The Orchestra of the Age of Enlightenment must have enjoyed themselves, for each instrument is a player in this piece. Berlioz was fascinated with instrumentation, and wrote the seminal treatise on orchestration cherished by Strauss and Mahler, and still useful now. Berlioz included the saxophone, then newly invented, long before the instrument became associated with jazz. Part of the fun in Roméo et Juliette is the way Berlioz highlights small details. An ophicleide (also a "new" instrument then) lurks among the trombone, darting out for a surprise attack in the opening Tumulte which depicts the Montague/Capulet struggle. The ophicleide is "nastier" than a tuba, a flick knife as opposed to a scimitar. Berlioz is writing brutish street fight, expressing much more than words might do.

Many other witty effects like the percussionist standing stage front, so you don't miss him, beating two metal bells. An allusion to the bells of the procession or to the Mass in general?  In the Queen Mab sequence (the scherzo in part II), the magical fairy is evoked by delicate flutes and piccolo. Mendelssohn wrote his Overture to A Midsummer Night';s Dream in 1826, and discussed it with Berlioz when they were in Rome four years later. Similar luminous delicacy, more refinement here than in the rest of Berlioz's sprawling, freewheeling adventure. 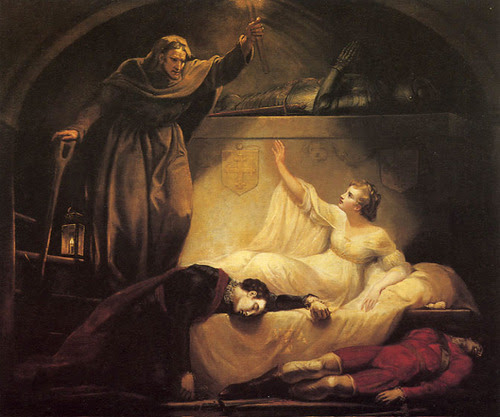 Although Patricia Bardon's French was unintellligible (she was substituting at short notice), it wasn't as much of a problem than it might have been. Juliette only sings for a short time, but her musical signature (plangent harps), lingers throughout the piece. She's in a tomb, but not dead, as the music reminds us. John Mark Ainsley sang the tenor part, but Berlioz placed much more emphasis on Père Laurence, who gets the biggest "part" in this piece when he sings the recitative and aria that implore the Montagues and Capulets to make peace. The bass Orlin Anastassov was a powerful presence, using his voice to quell the tumult. The part evidently appealed to Berlioz,  for it binds together all the orchestration, solo and tutti, vocal and instrumental. It's also grand theatre. COMPLETE REVIEW HERE IN OPERA TODAY
at February 20, 2012

Email ThisBlogThis!Share to TwitterShare to FacebookShare to Pinterest
Labels: Berlioz, Orchestra of the Age of Enlightenment