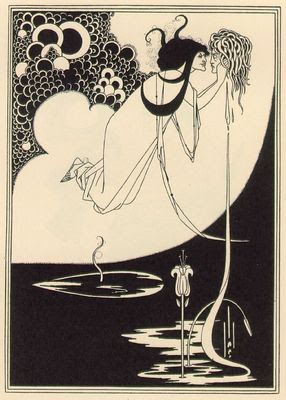 The 1923 silent film Salomé is being screened at the Purcell Room, South Bank, tomorrow, with a sound  track by Charlie Barber.  Music, for a film that was conceived as silent? Perhaps it's an indication of how lazy audiences have become that they can't pay attention unless there's noise in the background. Weeks ago, audiences walked out of The Artist, a modern  film which is partly silent, which is about silent film. So why go? (read more here). Salomé was created as a visual adventure, as a direct hommage to Aubrey Beardsley's illustrations of the story. It's not about the Salomé story per se, nothing to do with Strauss Salomé, for example. The idea is that Beardsley's pictures are coming "alive".

Most involved in the film were gay, which is also an important context, given that it was 1923 and homosexuality was illegal. So it's a very bold statement indeed. Moreover, the director and brains behind Salomé was a woman, Alla Nazimova, at a time when relatively few women did projects like that. All this and art nouveau, too? The film was suppressed at the time, but now it's box office bankable. Hence the "revival" with sound.

But first and above all, Nazimova's Salomé 1923 is a work of visual art which should be appreciated for what it is and how it translates one=dimensional sketches into moving, human film. Beardsley's art faithfully adapted to "real" situations. Nothing is straight in this movie, whatever the orientation of those involved. Nazimova's film uses Beardsley's stylization to create a deliberately anti-naturalistic aesthetic that reflects the unnatural nature of the plot. Arch surtitles - "Thou wert" and "Thou rejectedest me". They reflect Beardsley's own words which twist and curl as if in feverish delirium.. The sets are spartan, lots of white space, in the manner of Beardsley's etchings, which seemed shockingly alien to a world used to over-stuffed Victorian excess. Beardsley's aesthetic is  far from Alma-Tadema's hyper-realistic orientalism, which cloaked outright prurience with a veil of fake academicism. Beardsley doesn't do veils. 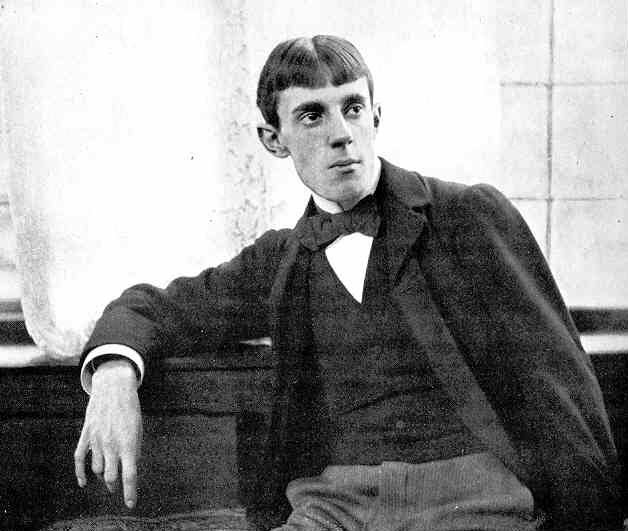 At the heart of this story is Herod's unclean lust for his own daughter, Salomé. Secondary dynamic is the relationship between Herod and Herodias, his long-term wife whom he treats like dirt. The Herodias in this film is much meatier than the Herodias in Beardsley - she has hair like a lion's mane and wears a leopardskin jumpsuit. Tina Turner, but 60 years too early. Female sexuality as opposed to Herod's leering infantilism. She looks at Herod with disgust. Because the set looks so neat it makes the fundamental perversion feel even more unclean.

Interestingly, Jokanaan looks exactly like Beardsley himself, only more repellent, hawk-like features and a skeletal ribcage that looks like Christ on the Cross in Spanish art. This adds a piquant twinge to the proceedings, as Jokanaan can't stop denouncing "The Whore of Babylon", as if all the sins of the world were caused by women, not men. It's pretty significant yet strange that lesbian Nazimova really makes a point of sexual attraction between this man and this woman. "All other men were hateful to me". Before she dies, she looks like she's having an orgasm. "The mystery of Love is greater than the mystery of Death". Wonderful minor figures - Black executioners, little black kids in headresses as tall as they are, strangely louche male attendants (nipple rings like targets). One lusts for Salomé while the other lusts for him. Attendants dressed in crazy turbans, and in the dance, women dressed as screens, surrounding Salomé as she switches from boyish androgyny to female demon (white hair cut in angles).  The Dance is magnificently choreographed - fast forward to 44 minutes. You can see the influence of Diaghilev and Nijinsky, whom Nazimova, a Russian, would have known of, even if she hadn't seen them in action. Salomé as The Afternoon of a Faun.

While the stylization is fundamental to the whole concept of this film, it makes for semaphore acting. In 1923, this wasn't such a big deal, since moving pictures were still a novelty. But we've become used to Hollywood ultra-fast action, so we need to switch off the autopilot assumption that drama has to be fast and butch. Much like we've lost the art of appreciating music that's not raucous and exaggerated. And, pertinently, we've lost the ability to appreciate a work of art on its own terms, without extras. Music was played in silent cinemas, but rarely composed for the film itself. However good the new soundtrack may be, it's a distraction from what is essentially a "silent", contemplative experience. You could spraycan the Mona Lisa and claim rights to the image.  Maybe it's "art" of a form, but it's not Leonardo. Salomé is a commercial winner, though profits won't go to Nazimova.  But it's just not the same thing, no matter how good the music might be, or what the audience might demand. View the full movie free with sound turned OFF HERE
at February 08, 2012