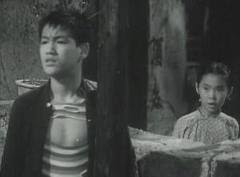 Lee was born into a well educated, sophisticated Cantonese family. His father was  a mover in Chinese movie circles, his mother connected to the influential Hotung family. He was born in the US while his parents were living over there, and not as coolies. By his teens, Bruce Lee had made many movies, together with the biggest names in the business. But when he returned to the US, despite his experience and connections, he had to take roles as a menial. The western market  could only cope with orientals  as stereotypes : stupid, subordinate and unworthy of respect. So when Bruce Lee went back to Hong Kong he shook things up. In Enter the Dragon, he beats up white guys. In colonial times this was dangerous.  But the Cantonese film industry was radical.  Until Bruce Lee, it just didn't engage with foreign subjects. Movies were associated with modernity and social progress. Read more about early Chinese film here.

Perhaps we can see where Bruce Lee was coming from in The Orphan's Tragedy (孤星血淚) (1955). In a rainstorm, a dying woman turns up on a peasant's doorstep. "Take care of my baby" she says, "His father named him Fook-wan" (slightly unusual name which means hope of good luck). Ten years pass, it's 1929. the boy (Bruce Lee) lives with his "grandfather" (Wong Cho San 黃楚山) in an idyllic traditional village. Life is hard, but the boy is filial. When grandfather and his friend give him a cake, he refuses it it with a smile. "You eat it, Grandad".

One day policemen enter the village, shooting guns A prisoner has escaped. He's not a normal convict. Fan Tin Sun is played by Ng Chor Fan (吳楚帆), one of the biggest stars of the time, an intellectual with high moral and political values. The local rich man To (Lau Hak Suen 劉克宣)  is afraid, because the man has something against him. Fook-wan's job is collecting firewood from the hillside for fuel. He meets the prisoner and helps him hide in a secluded mountain temple. At midnight, when Grandad is asleep, the boy creeps out with some food. Having searched the village, the police find Fook-wan missing. They go up the hillside. The prisoner thinks the boy has betrayed him. The police have brought the grandfather out to call for him. "You're called Fook-wan?" says the convict. Ng Chor is a brilliant actor. His face softens. "I knew your father. He was a good man but villains set him up. For ten years he sat in prison but never stopped thinking of you". This music in this scene is Stravinsky, The Rite of Spring. Angular drama gives way to tenderness. The prisoner escapes again and Fook-wan returns to his "grandfather". The prisoner visits a friend, Doctor ChanYuk Sing, (Lee Pang Fei 李鵬飛) who advises him not to seek immediate revenge, but to go abroad and work so his son will prosper.

One day a large sum of money is sent to Grandfather Wong for Fook-wan's education. They don't know whp has sent the money, but off Fook-wan goes to school in the city. The last we see of Bruce Lee, he's waving goodbye to Grandfather, the village and his playmate Biu-yee played by future mega star Siu Fong Fong, who morphs into the adult Yung Siu Yee, a big star of the 50's, to show how time has passed. .

Fook Wan returns from school. This time he's played by Cheung Wood Yau (張活游) another famous hero of Cantonese film. Doctor Chan greets him with more money from the Mysterious Benefactor so he can set up to study medicine. "But how can I thank him?" asks Fook Wan. "He doesn't want thanks, just be a doctor and help others". No-one knows where the money comes from, and Dr Chan isn't saying. But the wicked rich man has suspected all along that the money came from Fan Tin Sum, his old enemy. He plots to control Fook Wan through his beautiful daughter Choi Hung (Wong Fei Fei). Fook Wan and Choi Hung go to a western nightclub. He wears a western suit she's bought for him and is shocked by the price of alcohol. Meanwhile, back in the village, Biu Yee the peasant girl has become a traditional Chinese singer, to support Grandfather Wong who adopted her after her mother died.

Fan Tin Sum sends Fook Wan a huge sum of money to start a hospital. The whole village turns out at the train station to welcome Fook Wan with lanterns, firecrackers, a lion dance and trumpets.  There aren't any medical facilities: a new hospital is like a  miracle. Grandfather Wong is overcome with joy. But Fook Wan thinks the money comes from Mr To and agrees to set up a practice in the city, selling medicines. It turns out that the drugs are fake. "What's the problem?" says the crook, "medicine is a business like any other". Having been disowned by Grandfather Wong for selling out, Fook Wan tries to commit suicide. In walks Fan Tin Sum. "We met in the mountain temple". "Get out, you're a criminal" cries Fook Wan. Fan Tin Sum explains that the money came from him. Dr Chan intervenes and confirms that Fan is Fook Wan's father, who was set up by Rich To in just the same way.
Fan and Fan Tin Sum confront To at a dinner party. A fight breaks out. Fan and To are killed, accidentally. As Fan dies, he tells his son, "We don't live for ourselves but to help others" The final fanfare is Elgar.
at July 21, 2013