Totentanz : Thomas Adès gets his mojo back 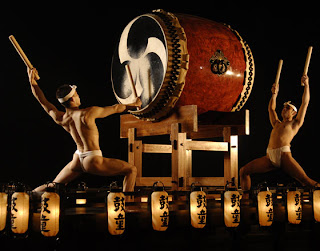 Welcome back, Thomas Adès  Adès Totentanz received its world premiere at BBC Prom 8.  It's a strikingly original work, quite unlike anything he's written in years, and restores his status after a long dry period. Totentanz should enter the repertoire even though performance presents logistical problems. Central to the piece is a giant Taiko drum, bigger than the one depicted here. But the drum is the heartbeat of Totentanz, integral to its meaning. The starting point of Adès's Totentanz was a fresco in the Lübeck Marienkirche which shows a series of people, dancing hand in hand with corpses, a view of the city (and Church) in the distance.
The Dance of Death was a frequent theme in medieval art, literature and music. There are dozens of depictions. But Adès's choice of the Lübecker Totentanz is particularly poignant. It no longer exists. It was destroyed in a firebombing raid in 1944. Ghosts haunt this music in many ways. Benjamin Britten wrote his War Requiem to mark the bombing of Coventry Cathedral. Adès's Tontentanz marks the infinitely more extensive destruction of an even greater heritage, and I don't just mean the cathedrals of Germany. This was a period when it was acceptable to destroy history, not just military targets.  The Taiko drum reminds us that terrible things happened all over the world, not just in Europe. 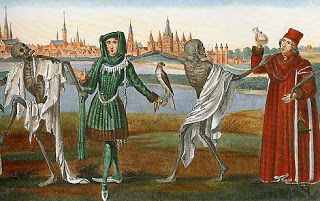 Medieval art isn't naturalistic. Large scale works are shown in sequence and there's no perspective in the modern sense. Adès's structure replicates this formality. Each segment unfolds like a dignified procession towards an inevitable conclusion.  While listening, I kept thinking how graphic this music is. The stomping ostinato suggests angular, vertical form, which suggests the movement of feet, trapped in lockstep. Strings wail, violently oscillating diagonals, up and down the scale like screams of terror. Trumpets and smaller percussion create details that suggest what is being lost. Happier memories, real dances perhaps not the sinister Dance of Death.

Two voices stand in the foreground, against a panoramic large orchestra, just like the original fresco. Not all music with voices is opera. Adès's Totentanz is not operatic. The voices function as an extension of the orchestra. Even the vocal lines replicate the shapes in the orchestra. The baritone (Simon Keenlyside) part is solid and non-effusive.Dietrich Fischer-Dieskau would have been ideal for this - another reference to Britten's War Requiem, as galling as that might be for Adès to admit. The baritone represents Death. The mezzo (Christianne Stotjin) represents Everyman, not just the Maiden, often chosen as a symbol for the loss of youth and beauty. Her lines waver upwards and down, contorted like spasms of pain. Adès was wise to choose a mezzo instead of a higher voice, for the shrillness suggests anguish. Lighter textures would not have quite the same effect.Words like "Ritter", "schwer" and "züruck" are spat out like missiles, weapons in a battle that has only one end.

After a magnificently cacophony, the music begins to spiral downwards. "Nimm, nimmer" sings the baritone, quietly, as if in macabre lullaby, The mezzo's voice elides, smearing the words so they sound like she's being drugged. She is. Her system is breaking down. The marching jackboot rhythms diminish to a slower, comatose tempo. At the end, the music scrapes along in near silence. We feel like we're being dragged, physically, into the grave.

There isn't anything quite like Adès's Totentanz in the mainstream. The only parallels I can think of offhand are the music dramas of Honegger, Carl Orff, K A Hartmann and Walter Braunfels in the 1930's and 40's, also recreating stylized "medieval" aesthetics. Or Britten's Church Parables. Plenty about all these composers elsewhere on this website, please explore. Modernity as medievalism. This aspect of music drama ia sadly neglected, but important.

This Prom began with Benjamin Britten's Sinfonia da Requiem. Too much is made of the Japanese connection, though Adès's use of the Taiko drum is relevant. Britten know about the Nanjing massacres even if the British government looked the other way. Because Adès's main concern was, rightly enough, the Totentanz, it wasn't particularly expressive.  Much better realized was Witold Lutoslawski's Concerto for Cello, thanks to a vivid performance by Paul Watkins.

Prom 8 is available online for 7 days HERE and will no doubt make further appearances. It's also being broadcast on BBC TV 4 on 28 July.
at July 18, 2013