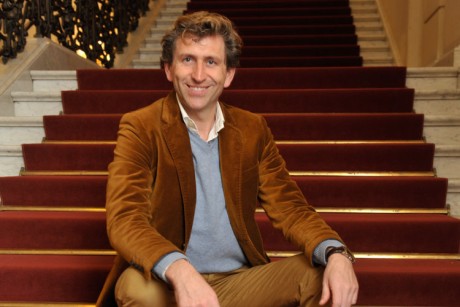 BBC Prom 20, 2013 felt like an historic occasion. Wagner Götterdämmerung with Daniel Barenboim and the Staatskapelle Berlin. It was an astonishing performance. No-one who was there will ever forget it . But the sensation of the evening was Andreas Schager. He was absolutely outstanding. Tonight I think, history was being made. True heldentenors are rare and one like Schager must be rarer still. His voice is divine, and he can act, both with his voice and body. Proms appearances are ultra high profile. Everyone all over the world wants to know who Schager is. His website crashed earlier tonight.  (It needs a more sophisticated revamp.)

HERE is my review of  Götterdämmerung Prom 20

It's just not possible for any singer to sing Siegfried out of the blue. Austrian born, Berlin resident Andreas Schager has quietly been building up a career in the smaller but more esoteric German houses, gaining the sort of experience that comes with hard work and total immersion in repertoire. He sings a lot of Wagner and did the title role in Rienzi twice, including this January in Hamburg. He's not a Met-style publicity creation and puts the hype about the Met Siegfried into perspectiive.  I was wracking my brain trying to remember where I'd heard Schager before and remembered the superb Mozart Magic Flute from Berlin this April. Schager sings the first Armoured Man. It's not a huge part, but he's singing it with the Berliner Philharmoniker and for Simon Rattle -- recommended! At around this time, Mark Berry heard him substitute at very short notice for Ian Storey Lance Ryan as Siegfried when Barenboim conducted Götterdämmerung in Berlin. A lucky hreak! But lucky breaks work only if you're ready and able, and Schager is ready, judging from this Proms performance.

Andreas Schager was the tenor who replaced Lance Ryan in Act 1 of Siegfried at the Berlin Stattsoper in April. Ryan had not turned up and was unable to be contacted. Schager was in the house rehearsing for Gotterdammerung in the same cycle and was asked by Barenboim to sing Siegfreid from the wings while a stage manager mimed the part. This was the same night Schager sang in Magic Flute with Rattle. Schager was brilliant and got a huge ovation. Fortunately Ryan turned up for Act 2 (no explanation for his lateness) and Schager raced off to the Philharmonie for his Magic Flute appearance. The story was widely reported at the time (http://www.telegraph.co.uk/culture/music/opera/9987919/Wagners-Ring-Staatsoper-Berlin-review.html).
Schager sang in Gotterdammerung 2 nights later to a standing ovation. There was definitely a feeling we were hearing something special.

Many thanks, David, I'll fix the typo. I was writing at 3 am after five Wagner sagas in 7 days plus Elgar in between. I'm shattered ! But still managed to do 1/4 of Bayreuth. Never get that much in a newspaper