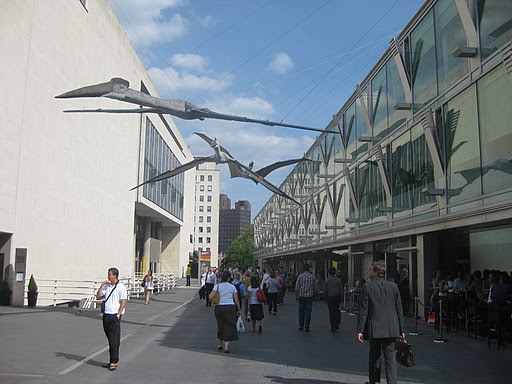 The National Theatre has lodged a long, detailed and strongly worded objection to the South Bank's proposed redevelopment. Since the National Theatre is an integral part of the South Bank, this objection carries much more weight than most. Read the full objection HERE. The piece is a model of professional, informed analysis, backed by proper architectural and legal input. The project has such huge significance, not only for London, but for the whole country. It needs to be approached in a serious way. The South Bank site gives only a limited, biased account, which is fair enough - they want it to go through without too much scrutiny. Most of us don't have the professional expertise to comment in the way the National Theatre does, which is all the more reason we should pay heed.

"There is a common fallacy reflected in the above paragraphs: that Southbank, the brand, is synonymous with South Bank, the area. Over emphatic boundary-marking is inappropriate to the audience that comes to the arts buildings and moves easily between them, and those who simply come to the Queen's Walk to enjoy the river views and the overspills of animation".

"In summary, we consider that the proposed development, in particular the Liner building, by virtue of its siting and scale contravenes relevant national, regional and local planning policies relating to the setting of the National Theatre, a grade II* structure; that the proposed building will abrogate the public perception of a unified cultural quarter; and that the wall effect it creates will undermine the amenity value of the National's largest public open spaces."

Under the the terms of consultation process, the National Theatre can only comment as far as the proposals pertain to itself, but the rest of us should be thinking in terms of how the proposals might work out in wider terms. The South Bank will be closed for another three years, only six years after the re-opening of the Royal Festival Hall. This time, the disruption will be even greater, possibly long term. The area has grown piecemeal, without any long term strategy or vision.

"Band Aid or Surgery?"  Cosmetic patches won't solve the problems of the South Bank. The basic problem is that it is a huge, nationally important enterprise squashed into an area hardly big enough to fit a local arts centre.

Architects design buildings, they don't design cultural policy. The responsibility for that lies not only with South Bank management but with the Arts Council. Where is the vision ? Where is the leadership?  How do piecemeal patches fit in with a wider overall strategy for the arts ?

A much more comprehensive solution to the South Bank's problems might be to diversify and decentralize. Even the Barbican is expanding to new premises and areas.  Notice that the Barbican retains core facilities like the Barbican Hall while outsourcing services that can be housed elsewhere.. The beauty of the Barbican approach is that they go into the community, rather than expecting the community to come to them.  There is no sacred rule that different facilities have to be housed in the same place.

Big scale facilities like the Royal Festival Hall can't be relocated, because they cost so much and are so specialized. But things like poetry workshops can happen anywhere. If the South Bank were decentralized, other parts of South London would benefit it things were spread around a bit. Think of LSO St Lukes rejuvenating Old Street.  It's infinitely better to do a few things extremely well than cram too much together.  There's no reason why the South Bank should become a bazaar. An arts centre should aim at excellence, rather than watering down its main purpose to look trendy. Because the riverfront space is so limited - and so unique - it should be used for prime, high-profile activities that have maximum impact. Rehearsal rooms and offices, and similar activities can be housed elsewhere and at less expense. As the National Theatre says "over emphatic boundary marking is inappropriate".