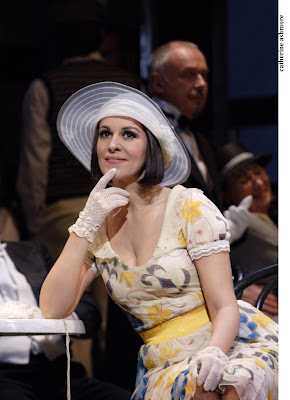 La Rondine isn't Puccini's finest moment. As drama it's a retread of La Bohème. The music resembles out-takes from Madama Butterfly. What holds it together is Magda. So when an artist like Angela Gheorghiu revives the role, she brings a much-needed extra dimension to the opera. This is the role that helped propel her to stardom together with Roberto Alagna. Now they're having a bitter divorce, fanned by media sensationalism.

Art imitates life. Ironically, that human background adds poignancy to what is essentially, a fluffy vacuum of an opera, despite its surface charm. Magda sings of her first love, and the kiss that sealed their passion. When she sang this with Alagna the extra-musical frisson must have been intense.It must take incredible courage to revisit this role now, when every note tears open old wounds.  For that alone, Gheorghiu deserves respect. So what if her voice isn't at its resplendent peak? She creates a far more accurate Magda because she accesses the underlying pain that animates the character. Gheorghiu shows that there is more to Magda than her fawning, false friends realize. Pretty and superficial might apply to them. but not to her. When Gheorghiu sings the long sequence "Ore dolci et divine" the strain isn't vocal, but emotional. She breaks off the last lines a little abruptly, rather than letting them linger. But that's far truer to Magda's true personality.

Some might prefer mechanical songbirds, who churn out mindless perfection, but for me a true artist has emotional intelligence. Artists are not gladiators in an arena. They exist for their art, not for the mob. Some singers attract nastiness that goes far beyond artistic criticism, and descends into vicious personal abuse. Perhaps that's how some people get their kicks. If they saw someone leaning over a parapet, they'd scream "Jump!", then righteously tut tut when the body hits the ground. It's a form of bullying, and usually the abuse of women, worse than anything Alagna may or may not have done. . If opera is based on human feelings, sensitivity is essential. If we care about opera as art, we should respect the human beings who sing and create it. The last thing they need is to go on stage, knowing that the media has fanned the flames of frenzy against them. Gheorghiu is in a difficult position at the moment, so it's all the more to her credit that she went on at all.

For an intelligent and humane discussion of cancellitis please read this, written by a serious opera fan and singer.

Having braved the personal demons Act One would have awakened, Gheorghiu settled into the role ever more comfortably as the opera continued. Her Ruggero, Charles Castelnovo, supported her well. If his voice isn't quite as lovely as many who have done the part before, he compensated by being a solid foil to Gheorghiu. Perhaps the all-important kiss worked its magic, for Gheorghiu's Magda blossomed again, like the roses in the song. Castelnovo seems genuinely nice, so Magda's eventual renunciation seems quite natural.  Magda has come to terms with her past and doesn't need illusions of youth and love. Gheorghiu seems to find strength in Magda's maturity. For once the ending convinces, even though it's not written with the depth Puccini might have given to his other heroines.

.Sabina Puertolas sing Lisette, Magda's maid.  The rapport between Gheorghiu and Puertolas seems genuinely affectionate: they bounce off one another merrily, singing with palpable warmth. The dynamic lifts the opera , defusing the mood. Some of the wittiest musical passages illustrate Prunier's attempt to turn Lisette into what she can never be. Edgaras Montvidas sang a very good Prunier. He made us hear the "Poet" who thinks in terms of dreams, not reality, casually changing names and identities.  Ultimately, La Rondine is a warm-hearted, humane opera where pretensions are overturned. Lisette goes back to being a maid, and Magda (presumably) goes back to being Rambaldo's good friend.  Good nature prevails over delusion.

Marco Armiliato conducted. The production is the Nicholas Joël perennial, as flashy as the life Magda and her friends seem to live. It's telling that when Magda and Ruggero share their brief happiness that the backdrop shows fake flowers. The real beauty in La Rondine lies in the portrayal of Magda as a human personality. As such, Angela Georghiu is truly vindicated.